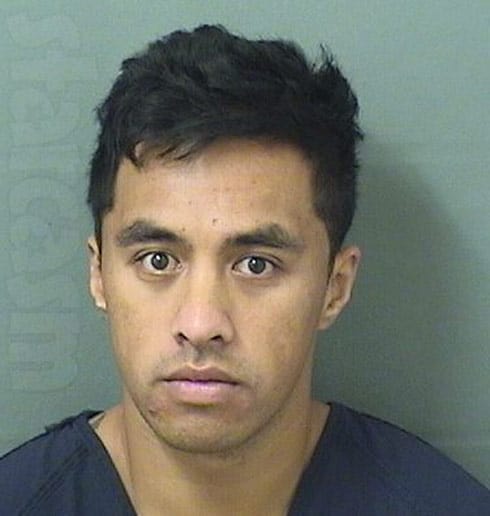 Apparently being around the Palm Beach, Florida area at Christmas time is not a good thing for Bravo reality stars. Less than a week before the one-year Countess LuAnniversary for her infamous arrest involving booze and assaulting an officer, Below Deck deckhand Ross Inia was arrested on similar charges in West Palm Beach!

According to jail records, Ross was booked into the West Palm Beach main detention center at roughly 3:21 AM Saturday morning. He has been charged with battery on a law enforcement officer (third-degree felony), crimes against person — harming a public servant (second-degree felony), and disorderly intoxication (second-degree misdemeanor). His total bond amount is set at $15,550.

Prior to being booked early in the AM on Saturday, Ross and Below Deck Mediterranean star Joao Franco posted numerous videos drinking together on Instagram. Here are some screen grabs from their stories:

The Cheat Sheet reports that Joao shared some additional updates via Instagram story videos that he later deleted. “Ross is in jail…and we’ve been looking for him four hours and counting,” he wrote on one post.

Joao later posted a clip with his friend, who was also partying with the guys earlier, and they reveal they are at the West Palm Beach Police Department. “We’ve been told we cannot find Ross,” Joao says, before adding: “Apparently it’s going to take between five to ten hours just to process him.” (At the time of this post, Ross is still in custody.)

Joao then came to the defense of Ross, but probably didn’t do his drinking buddy any favors. “Looking for @Ross_Inia. Ross grabbed me as a mate, the police grabbed us and handcuffed us. Ross ‘resisted’ arrest. F**k the police. Find the real criminals.”

It is unclear how a US felony arrest might impact Ross’s employability, given that he is from New Zealand. Chances are he will be able to cut some sort of deal and perhaps lessen the charges to only misdemeanors, but it’s not as though he has the resources that LuAnn did as far as being able to hire an expensive attorney.

UPDATE – We now know more details about what happened thanks to the police report, which reveals that Ross punched a police officer before threatening arresting officers and their families. Click the link for all the latest!