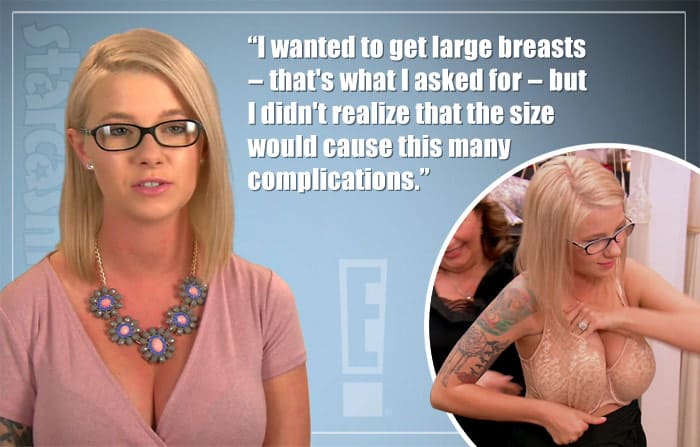 Former 16 and Pregnant star Lindsey Nicholson made headlines back in 2016 when she joined a long line of MTV stars who jumped at the chance for a “free” plastic surgery procedure(s) by Dr. Miami in exchange for allowing him to stream the surgery on Snapchat. Lindsey opted for the largest implants allowed by law, and for a while she was very happy with her decision. That later changed — dramatically — and Lindsey approached Botched doctors Terry Dubrow and Paul Nassif about fixing the issues caused by the large implants.

On this week’s episode, titled “Bigger Isn’t Breast,” Lindsey introduces herself by revealing that she was on 16 and Pregnant before sharing a brief bio about herself up until her time on MTV.

“When I was pregnant with Aniyah, I loved how my breasts became so big,” Lindsey recalls. “I mean, I went from an A cup to, like, a double-D, triple-D. After I stopped breastfeeding, WHOOP! deflated.”

Lindsey received the pitch from Dr. Miami, who was represented by the same PR firm, and she couldn’t pass up the opportunity to have the procedure for free. “I wanted to get large breasts — that’s what I asked for,” Lindsey admits. “But I didn’t realize that the size would cause this many complications.”

She says that some of the complications included a “weird shooting pain throughout them,” the tendency for them to “fall into my back” and a difficulty finding bras that fit.

Lindsey and her mother Lonita introduce themselves to the Botched docs and Terry asks her, “So, what are your goals?”

“I want them to be smaller,” Lindsey replies. “Not too much smaller, but smaller.”

“What does your husband think?” Terry asks.

“Well, he loves them,” Lindsey admits, as most everyone in the room chuckles. “But he just wants me happy, so if that’s what we have to do, then he’s fine.”

After examining her a bit closer, Terry provides a synopsis of the situation:

When it comes to breasts, there’s the pocket, there’s the implant, and then there’s the overlying soft tissue. So your pocket is way too big. The way we close that down is we put stitches in, but it has to be a very stable pocket that doesn’t allow an implant to break it down — and that’s what happened with you. Because the implant’s so heavy, it’s caused a ‘weighted dissection.’ You have to put a smaller implant significant enough that you maximize the chance the repair will hold.

Although complicated, the situation is something that Terry feels confident about being able to help with. “This is fixable,” he assures Lindsey. “There are challenges to it. There are sometimes touch ups needed, but this is something we’ve done many times. Is that something that you want to do?”

Lindsey is super excited about having the procedure done, but before that could happen, she calls the doctors with the surprise announcement that she is pregnant! Little did Lindsey realize at the time that she would later give birth to twins Jackson and Paisley prematurely, which would kick off an emotionally devastating medical journey for little Paisley. Thankfully, that journey has had a joyous result as Paisley was able to recover and is currently a healthy and happy little one-year old!

Lindsey shared this photo and update on her little ones in October:

Pop the bubbly ? today’s a day for MAJOR celebration. Not only did the twins turn 11 months a few days ago, today for the FIRST time EVER ALL of Paisleys liver levels were normal ?? but wait.. it gets even better. Paisley has officially made it on the growth chart ?? doctors didn’t predict her making it on the chart until she was two!! Oh and Paisley didn’t even cry when she got her blood drawn? talk about one tough cookie. This little one is going to move mountains ??? oh & Jackson’s living his best life???

Unfortunately, Paisley does need to have at least one more surgery done. Lindsey shared the news in November:

Happy weekend from Jackson + Paisley ♥️ Jackson is our wild child and full of personality lol Paisley is so sweet and shy. She’s now on the growth chart and getting so big & strong. We did find out she has to have another surgery though ? when they took out her g tube it apparently didn’t heal correctly or close internally. I thought her healing site was just taking a bit longer to heal because of her immune system, I was unfortunately wrong. Praying this will be her last and final surgery ?? good news Is she can pull herself up on furniture now like a big girl. Jackson has taught her how to take her clothes + diaper off ?? so that’s fun to clean lol, but being able to watch my tiny humans grow is the biggest blessing♥️♥️

It’s unclear if Lindsey plans on returning to Terry and Paul to have the proposed breast reduction and correction performed.

UPDATE – We spoke with Lindsey and she tells us that she did have corrective surgery, but it wasn’t Dr. Terry Dubrow who performed the procedure.

Here is a video excerpt from Lindsey’s episode of Botched, you can visit E Online to watch the full “Bigger Isn’t Breast” episode on demand.