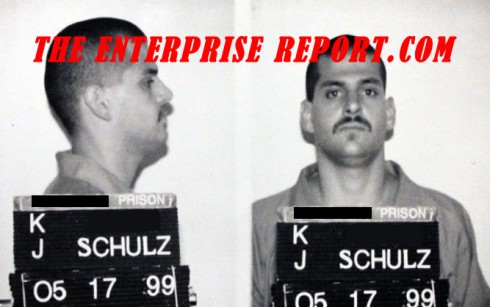 As we reported in a previous post, Storage Wars star Jarrod Schulz has had a number of run-ins with the law, including drug possession and transporting arrests in the late 1990s. Those arrests resulted in a couple stints behind bars, the latter of which was a 16-month stay in California state prison. At the time of the previous post, we were unable to track down any of Jarrod Schulz’s mug shot photos, but Eric Longabardi at The Enterprise Report has uncovered two Jarrod Schulz mug shot photos from 1999.

In the photos, one from straight-on and the other a profile shot, Jarrod can be seen sporting his usual scowl with a bit more hair on his head and a bit less on his chin.

Longabardi doesn’t reveal much about what the mug shot is from, only that “Schulz was convicted of a serious crime and spent time in prison for the offense.”

As we revealed in our previous post, Jarrod appears to have been arrested for felony possession of a controlled substance in 1997, and according to a Reality Weekly article he was also arrested later for transporting narcotics and driving under the influence of alcohol, for which he served the 16-month behind bars. So perhaps this is from the second arrest?