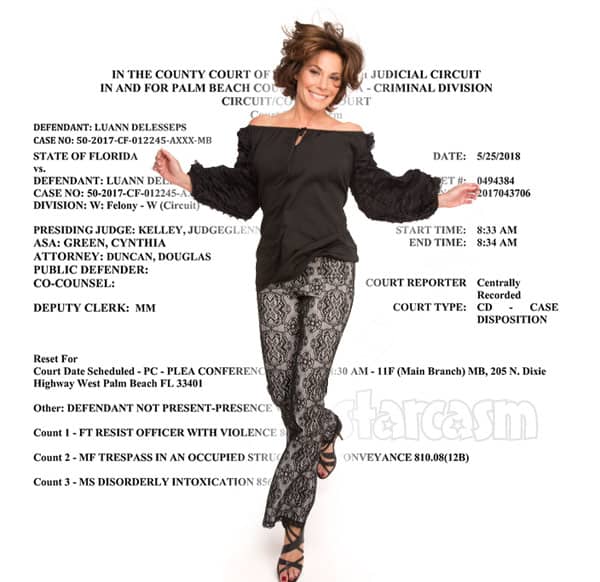 Just as expected, The Real Housewives of New York City star Countess Luann de Lesseps struck a last minute plea deal for her drunken assault of a police officer on Christmas Eve. The deal was agreed to on the same day that Luann was scheduled to go on trial before a jury in Palm Beach County, Florida.

After initially being charged with four felonies, Florida prosecutors later dismissed the counts of battery of a law enforcement officer as well as the two felony counts of corruption by threat. That left one felony count of resisting an officer with violence in addition to misdemeanor charges of trespassing and disorderly intoxication.

Luann was not present in court on Friday when her attorney, Doug Duncan, announced that she will plead guilty to a lesser misdemeanor charge, according to CBS 12. Online court records indicate that the plea conference has been scheduled for July 25.

We’ve stated numerous times in our coverage of Luann’s arrest that we assumed there would be a last minute plea deal — mainly because it was way too risky to put a privileged reality star before a jury after she admittedly slammed a police officers head in a door before later telling an officer repeatedly: “I’ll kill you!”

Here’s an excerpt from the very first post I did about Luann’s arrest when she was still facing four felony charges:

The felony counts against Luann are incredibly serious, and if found guilty of all of them she is looking at many years behind bars. I’m guessing that fans of The Real Housewives of New York City (like myself) might find this entire story to be quite funny, but I stopped myself from laughing immediately when I realized how different this whole thing might be perceived if the person arrested for the same things wasn’t a 52-year-old white female reality star. I assume that the prosecution will have to deal with that issue as well, and will be under a lot of scrutiny if it appears that Luann is shown any leniency.

So what do you think? Was the Countess shown leniency that a suspect from another demographic might not have been shown after slamming a police officer’s head in a door (or something similar) and threatening to kill him more than once?

To be honest, I’m curious why prosecutors didn’t let this one go to trial. I just cannot imagine a Palm Beach County jury not coming back with a guilty verdict given the evidence and what Luann has admitted. Then again, perhaps the prosecution felt the misdemeanor charges were appropriate all along, and they only left the single felony count on the table as insurance in the bargaining process?

Regardless, this is certainly good news for Luann, who didn’t even have to make a trip to Florida. Here’s a video of Luann and her daughter Victoria enjoying some poolside on-the-job time together on Thursday: