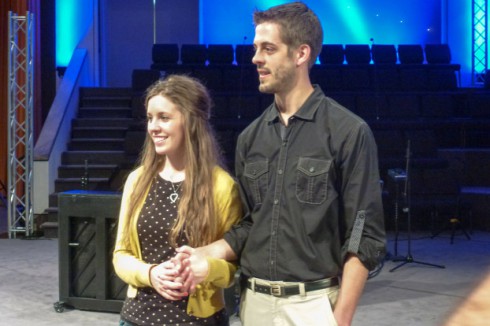 Sometime today, somewhere in Northwest Arkansas, 19 Kids and Counting‘s Jill Duggar and Derick Dillard are tying the knot — in front of what sources are now reporting will be 2,000 guests!

To ensure a smooth ceremony for the big day, 100 people from the Duggars’ and Dillards’ inner circles gathered for a rehearsal on Friday evening. Sadly, one notable person not in attendance was Derick’s mother, who, we have learned for the first time, is battling cancer.

“I want to ask everyone to pray for my mom,” Derick told People of his mom, Cathy. “Anyone who has been through [cancer] knows what it is like, and if everyone could think of her, I know she would really appreciate it.”

Although Cathy was unable to attend the evening’s events, Derick pushed a wheelchair down the aisle during the rehearsal in preparation for her anticipated presence during today’s ceremony. Jim Bob Duggar also asked people to pause during the subsequent rehearsal dinner to pray for Cathy’s heath. Her inability to attend the rehearsal likely weighed particularly hard on Derick, who lost his father in 2008.

Derick’s younger brother, who will serve as his Best Man, said during the rehearsal dinner, “I would like to speak for our mother and father and say we’re very proud of you, Derick, and know you will continue to make us proud.”

Of course, there was a lot to celebrate during the evening. After the rehearsal at an Arkansas mega-church, the wedding party and select other guests dined on a barbecue buffet while friends shared stories about the young couple. Some of Jill’s younger siblings also gave the pair handmade gifts and showed a video reenactment of Derick’s proposal.

The soon-to-be newlyweds later spoke to People about how they’re feeling.

“We’re really, really excited,” Jill said. “My sisters have done a great job, and my wedding team of volunteers has gotten most of the wedding planning done ahead of time.”

Derick added, “I try to tell her that it will be okay, everything will work out.”

One person who seemed on-edge? The father of the bride.

“I’ve been crying half the day, so I’m making jokes to keep from crying,” Jim Bob said. (Wife Michelle previously said they were both struggling with the thought of their first daughter leaving home.)

We’ll be sure to follow up with any pictures or details that are available from today’s big ceremony… Particularly because TLC just announced footage from Jill and Derick’s wedding won’t air until next fall. 🙁