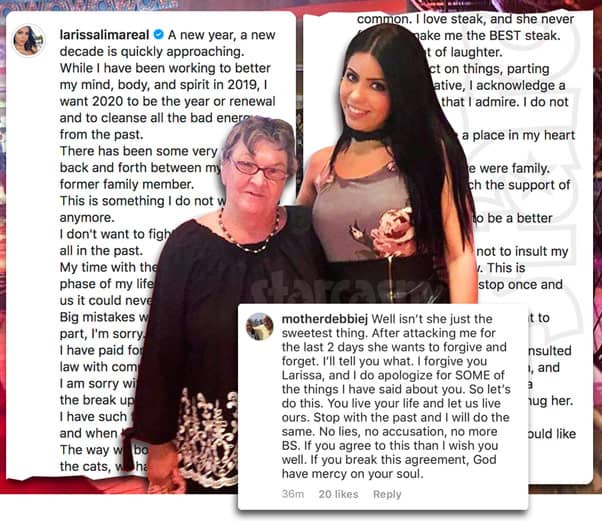 90 Day Fiance: Happily Ever After couple Larissa Dos Santos Lima and Colt Johnson officially separated for good in January of last year after Larissa was arrested for domestic battery for the third time. Over the past twelve months, Larissa has continued to feud with Colt and her former mother-in-law Debbie on social media, a feud that was re-ignited this month after Colt listed Larissa’s wedding dress for sale online for $500.

Larissa and Debbie have gone back and forth hurling accusations against each other online over the last few days, culminating in what appears to be a cease fire.

Colt offers Larissa’s wedding dress for sale on FanBound for $500. Larissa reacts by saying the listing is just another example of Colt using their relationship to stay relevant. She says that the dress was included in a bunch of personal items that she tried to get back but was unable to due to a restraining order. Debbie calls BS and says Larissa was more than welcome to grab the dress and anything else she wanted.

Larissa replied by claiming that the only things she was able to get back were those items with her name on them, like her birth certificate and other documents. She says that she had to fight for those, and picked them up with a police escort. Debbie calls BS again and accuses Larissa of trying to take documents and personal items belonging to Colt.

Larissa shares a lengthy, well-written post saying that she is tired of all the drama and that she wants to make peace with Debbie. Debbie says OK as long as Larissa promises to leave her and Colt alone and move on.

For those of you wanting the full Monty, here is pretty much all of the drama from Larissa and Debbie as it played out on their social media accounts, as well as the comments section of the account run by John Yates:

LARISSA: He is using me to keep his name on the pages. His selling my wedding dress is the perfect example of that. He kept some of my personal items and I was unable to get them because of the restraining order he had on me. I had to try to fight for my things in court, but I gave up the fight because I did not have the money to fight a long divorce. He is selling what I couldn’t take, but what I wanted back. And I stopped to answer it because I also know he likes to antagonize me with someone else that don’t worth to mention just to see my “reaction.”

DEBBIE: I’m sorry but everything in her statement is a lie. She came and got everything she wanted. She knew where both of her wedding dresses were. Exactly where she put them 7 months before. Thrown in the bottom of the guest room closet. She didn’t want them. She could of asked for them at any time. Colt figured after a year she didn’t care. So he sold one. She has never admitted to her part of a failed marriage. Grow the hell up and stop blaming everyone in your life for your screw ups. Seriously get help. I’m so sad for you.

LARISSA: They made a post and packed my stuff in boxes after I see the boxes and noticed that haven’t my birth certificate, documents, insurance and immigration process I went there with the cops. I could take everything that has my name legally there but gifts and others stuff she didn’t allow and I said screaming that I had to fight for it at the court. God blessed because I got everything with my own effort and even better that I had there!! But I didn’t give was taken from me. I never exposed that because they are nothing for me. But I am tired of ppl asking about the dress so is it And like I said everything that was took I have now better with my own effort.

DEBBIE: BS as usual. She could of taken her dresses. Colt didn’t want them. She took all of her things that belonged to her. Her dresses belonged to her. She tried to take Colt’s birth certificate and Colt’s watches from his dad. She tried to take all of Colt’s important papers. That’s when I said NO. Stop this sh*t. Larissa stop your bull face lies. What the hell is wrong with you. You could of taken your Wedding dress. You took your computer it was in the same room. Stop lying just because Colt wouldn’t take you back. You are so revengeful.

In case you somehow missed it, #90DayFiance star Larissa was arrested for domestic battery for the 3rd time on Friday & Colt filed for divorce the same day! https://t.co/7nuy3iIMQ4

COMMENT: @motherdebbiej lady, relax. Your son was just as bad as she was. He’s no victim.

DEBBIE: I’m very relaxed. You see I have to disagree. You may think I’m biased. But the truth is. My son was a victim of Domestic violence. She is a victim of being denied plastic surgery. Also being denied whatever the hell she wanted. He has apologized many times to her and beyond. Has she even once said anything or any part was her fault. Btw there is no excuse for a wife to batter her husband. I’m sorry do you disagree?

DEBBIE: Btw she did have a cop with her when she came and got her stuff. She could of taken it. Larissa drop dead

COMMENT: @motherdebbiej please don’t wish death on anyone.. while she is not a saint, she’s someone’s daughter, mother..don’t go that low hun…

DEBBIE: Seriously you really think I meant that. It’s a saying. I don’t want her dead I want her to be a honest person and to stop lying and also to take responsibility for your actions. You are right. That was wrong and I’m sorry. I never would wish death upon anyone even her. How about this, Larissa stop being in denial about your actions. Take respect for your part and move on. You never wanted the dress. You know what that’s ok. Move on. Colt has?

DEBBIE: That’s impossible. It never happened. Because if it did, Colt would of given it back to her. So you’re wrong or you just want to help her look good. Good for you, helping out a friend. I can respect that. Try again on someone else. 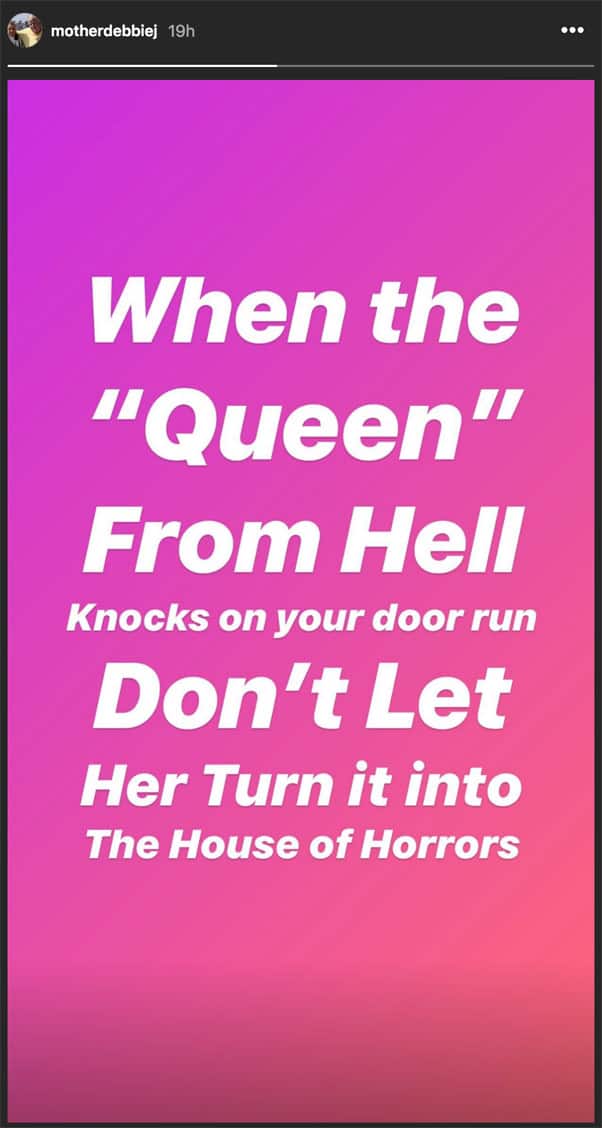 DEBBIE: There is only one person that caused this “so called house of Horrors” Any one care to guess. Just kidding we all know who and what she is. Thanks for playing.

DEBBIE: Sweetie I have moved on but when the Queen is spreading lies about my family I will defend my family with my dying breath. It’s really not about moving on. It’s about what’s right ad what’s wrong. Realize the difference and you will have a more understanding of what is going on around you. Good luck with that.

DEBBIE: Well isn’t she just the sweetest thing. After attacking me for the last 2 days she wants to forgive and forget. I’ll tell you what. I forgive you Larissa, and I do apologize for SOME of the things I have said about you. So let’s do this. You live your life and let us live ours. Stop with the past and I will do the same. No lies, no accusation, no more BS. If you agree to this than I wish you well. If you break this agreement, God have mercy on your soul.

So what do you think, will Larissa and Debbie (and Colt) be able to keep the peace in 2020?