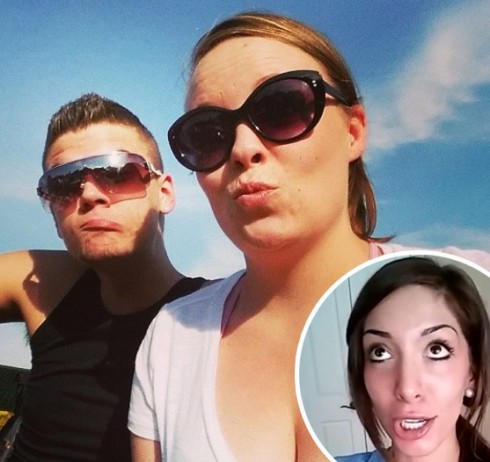 Farrah Abraham has thrown shade at Catelynn Lowell and Tyler Baltierra again in their feud that all started with comments made by Farrah in her Starcasm interview.

• Farrah told Starcasm that it made her sad to see Tyler and Catelynn make “poor choices.”

• Catelynn responded by tweeting, “Huh bad choices?!? Hahaha I didn’t make a so called ‘sex tape’ but WE make the bad choices?”

• Farrah then tweeted, “Glad I moved on #DoorSlammed wish those #StillTeens all the best when your not a Teen #QuitPlayin.”

• Tyler followed that up by tweeting, “If only that tweet made sense If your going to attempt 2 be a smarta*s at least make it sound good #BackDoorSlammed.”

Following the latest reply from Tyler, which was retweeted by Catelynn, Farrah spoke with Radar and ratcheted up the (former) Teen Momma drama:

“I don’t pay attention. I’ve just moved on in my life. Maybe they should too. I wasn’t even directing it towards them. I guess this is just a cry for them needing attention and wishing that they had a life or something. Look, I’m just over reality stars and I’m over other celebrities doing stupid things when things are not really directed at them.”