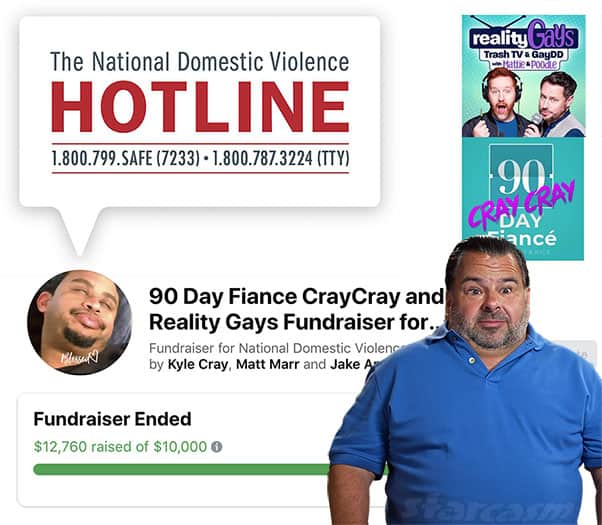 TLC’s 90 Day Fiance franchise has a lengthy history of ignoring domestic abuse and sexual assault issues with the franchise’s cast members. As a recent example, producers were more than willing to overlook accusations of sexual assault against memorable (and meme-able) Before the 90 Days star “Big Ed” Brown by a former work colleague as they invited Big Ed to join the casts of Pillow Talk and the discovery+ series 90 Day: The Single Life.

Big Ed’s return to the small screen on multiple 90 Day Fiance shows inspired a Change.org petition titled “TLC should remove Big Ed from their channel.” Petitions for cast members to be removed from reality shows is a fairly common phenomenon, but this petition has managed to garner more than 26,000 signatures so far — which is a very large number!

Here is the description from the petition:

“Big Ed” has been adopted by TLC as their supposed break out star from their latest season of 90 Day Fiance: Before the 90 Days. Sharp Media has taken him under their wing and promoted him and pushed him into the limelight..

He has been accused of many things including sexual assault and displays questionable online behavior. I will outline these allegations and considerations:

1. A woman has come forward and alleged that she used to work with Big Ed. She also alleged that for 9 months, she was sexually harassed and assaulted by Ed while they worked together. She had to sign an NDA and admits she’s been in therapy for years to get over it.

2. He consistently chooses young girls to be on his Lives. His preference for inappropriately young women is also seen when he tells Rose he is old enough to be her dad.

3. His trip on his season of Before the 90 Days was clearly sex tourism and to spin it as a love story promotes disgusting, predatory behavior that is a systemic global problem, especially in poverty-stricken Asian countries with very young women.

4. The way he treated Rose on the show was degrading and misogynistic. For a channel that has such a large female following to champion a man who treats women like that, is ignorant and rude about her culture, living situation, and health seems counterintuitive.

5. It seems unfathomable that advertisers such as those tagged in this petition would agree with and support the promotion of someone who sexually assaults, preys, and demeans women and bullies people online.

Big Ed’s co-star on The Single Life is a much younger woman named Elizabeth “Liz” Marie. A couple of weeks ago, a leaked phone conversation allegedly between Big Ed and Liz was posted by @90DayCouple on Instagram. The conversation is a heated exchange after Liz offered to give a male coworker a ride home.

Here is the phone conversation. Be warned that there is A LOT of foul language:

After the call went viral online, numerous 90 Day Fiance bloggers, YouTubers and podcasters decided to boycott mentioning Big Ed at all in their coverage. Silence can be quite loud, but a couple of the boycotters decided to try to take the negativity and turn it into something concretely positive.

The hosts of the Reality Gays and 90 Day Fiance Cray Cray podcasts launched a Facebook fundraising campaign for The National Domestic Violence Hotline. Here’s the description of the campaign:

Join Reality Gays and 90 Day Fiance CrayCray in raising money to support the National Domestic Violence Hotline. Both podcasts will each match up to $2,000 of your donations!

The National Domestic Violence Hotline answers the call to support and shift power back to those affected by relationship abuse.

Facebook pays all the processing fees for you, so 100% of your donation goes directly to the nonprofit.

The campaign was started on May 27, and it managed to surpass its $10,000 goal in just 5 DAYS! @90DayCouple shared an Instagram post promoting the campaign and wrote: “Did you know that @90dayfiancecraycray and @realitygayspodcast have raised almost $10,000 for The Domestic Violence Hotline???”

90 Day Fiance Cray Cray co-host @Going.Kyle responded to @90DayCouple by expressing appreciation for the posting of the leaked phone call between Big Ed and Liz. “Thank YOU for the scoop that inspired this fundraiser and for everyone to finally cancel Rose’s ex.”

The fundraising campaign has since ended after raising $12,760 total.

Neither TLC nor discovery+ have publicly addressed the allegations against Big Ed, which is status quo for the franchise. For example, producers continued to film Larissa dos Santos Lima for 90 Day Fiance: Happily Ever After even after she was arrested on three separate occasions for domestic battery against husband Colt Johnson.

And TLC’s blind eye doesn’t just apply to returning cast members. The show filmed Geoffrey Paschel for 90 Day Fiance: Before the 90 Days just months after he was arrested for domestic assault stemming from an altercation with his girlfriend at the time. Geoffrey would later face additional charges (including aggravated kidnapping) due to the incident. Geoffrey was also caught up in multiple custody battles with multiple allegations of sexual assault from his ex-wives at the time that he filmed.

Producers and TLC were obviously well aware of the Geoffrey situation because they did not invite him to the Tell All and also excluded his scenes from the Pillow Talk after show. I suppose that was their way of taking a stand?

I want to add that I do not recall TLC ever making any sort of public statement in regards to the numerous domestic violence and/or sexual assault arrests and allegations involving cast members of the 90 Day Fiance franchise. Unfortunately, their “ignore it and it will go away” strategy seems to be working. Or, at least, it isn’t not working.

BEFORE THE 90 DAYS Ash asked Tom to slide into Avery’s DMs, she agreed to a date REPORT