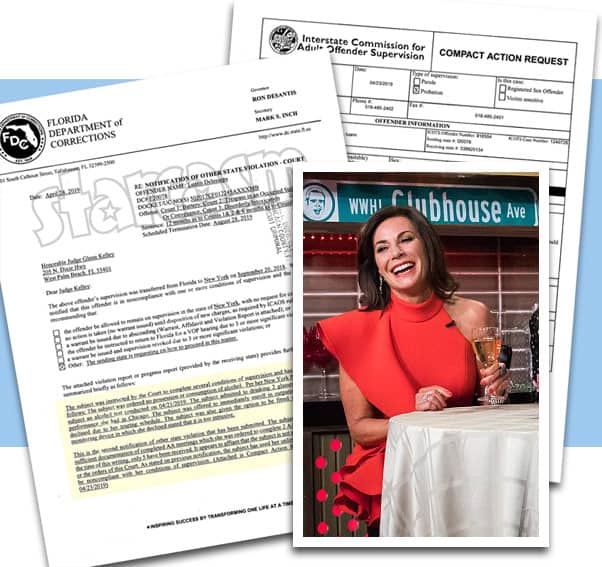 The Real Housewives of New York City star Luann de Lesseps got a very sweet plea deal after drunkenly assaulting a Florida police officer and repeatedly threatening to kill him on December 23, 2017. In exchange for prosecutors dropping the felony charge of resisting an officer with violence, all the former Countess was required to do was follow the guidelines of her probation, which included not drinking and attending Alcoholics Anonymous meetings. For the second time this year, her New York probation officer has filed documents stating Luann is not taking her probation seriously — including a recently failed test for alcohol consumption.

In a Compact Action Request form sent to authorities in Florida from the state of New York, it reveals that Luann tested positive for alcohol on April 22. Luann admitted that “she had 2 glasses of mimosas after a performance [of her burlesque show] in Chicago.”

After she failed her test, the 53-year-old reality star was “offered the opportunity to immediately enroll in outpatient treatment,” but Luann insisted that her current touring schedule would interfere with her treatment participation.

Luann was also “given the option to be fitted with alcohol ankle monitoring device,” but she said the device would be too “intrusive” while performing.

The conflicts between Luann’s work and travel requirements and her probation stipulations are what motivated the state of New York to inquire what Florida would like them to do about the situation.

The Florida Department of Corrections responded by summarizing the situation before presenting the following conclusion:

This is the second notification of other state violation that has been submitted. The subject has failed to provide sufficient documentation of completed AA meetings which she was ordered to complete 2 AA meetings per week. At the time of this writing [April 24], only 5 have been received. It appears to affiant that the subject is not serious about her sobriety or the orders of this Court. As stated on previous notification, the subject has used her unlimited travel as a reason to be noncompliant with her conditions of supervision.

Unlike the the previous non-compliance report filed in February, the judge this time decided that further action was required. His instructions were to “provide Affidavit and violation report, schedule VOP (Notice to Appear) hearing, and instruct offender to return to Florida for hearing.”

So, it sounds like Luann will soon be returning to Florida for a hearing to explain why she does seem to be taking her probation stipulations seriously.

UPDATE – After we broke the news, Page Six did a very similar story and got a statement from Luann. “I take my sobriety very seriously and like many in my situation, it is a daily struggle,” she says. “I remain committed to doing whatever it takes to continue living a healthy sober lifestyle.”

As previously mentioned, the state of New York filed a similar non-compliance report back in February. That report listed the missed AA meetings, completion of only half of her required community service hours, and missed breath tests before concluding: “The subject has been under supervision for a period of six months and has failed to complete or comply with any special condition that has been ordered.”

Palm Beach Police release video of Countess Luann de Lesseps' Christmas Eve arrest in which she slips out of her cuffs and repeatedly tells an officer "I'll kill you!" Watch the video: https://t.co/C8xq2NZt6J

I’m always astonished when I do a post about someone not taking probation or a court order seriously, especially when there is an alleged assault on a police officer involved! Here is a summary of how lucky Luann has been so far in regards to the case:

The 53-year-old reality star was initially facing four felony counts, but Florida prosecutors later dismissed the charges of battery of a law enforcement officer as well as the two felony counts of corruption by threat. That left one felony count of resisting an officer with violence, in addition to misdemeanor charges of trespassing and disorderly intoxication.

As part of her deal, Luann pleaded guilty to a lesser [misdemeanor] count of battery as well as the original trespassing and disorderly intoxication charges.

I assume that if Luann is found to not be fulfilling her end of the plea deal, the felony count of resisting an officer with violence will be back on the table — as will potential jail time.

We will continue to monitor the story and will update when there is a new development.