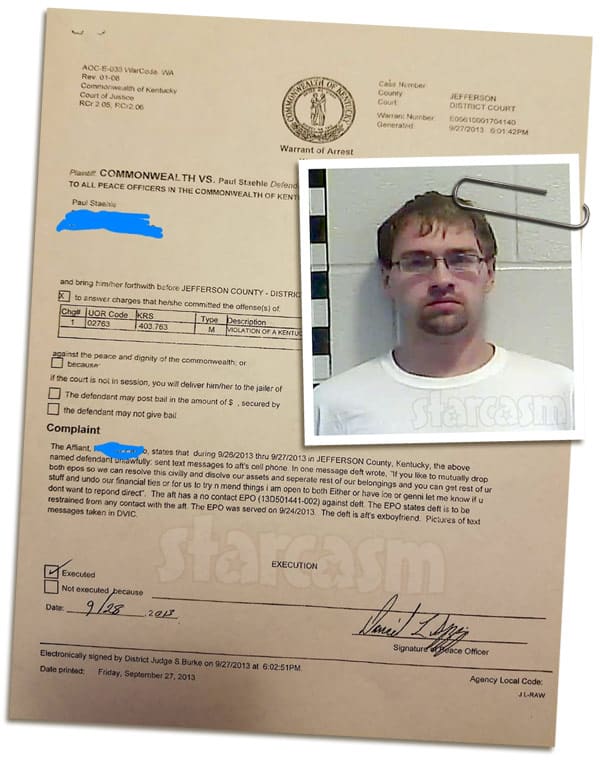 We originally broke the story that 90 Day Fiance: Before the 90 Days star Paul Staehle was arrested for violating an emergency protective order in 2013. There was little information available about the arrest, but now Paul is shedding some light on what happened.

Paul took to Facebook over the weekend and posted the warrant issued for his arrest at the time. “Its sad I actually feel I have to post this,” Paul wrote in the caption. “I filed the initial EPO,” he explains, “She than filed one after she was served. This was my violation I was arrested over.” 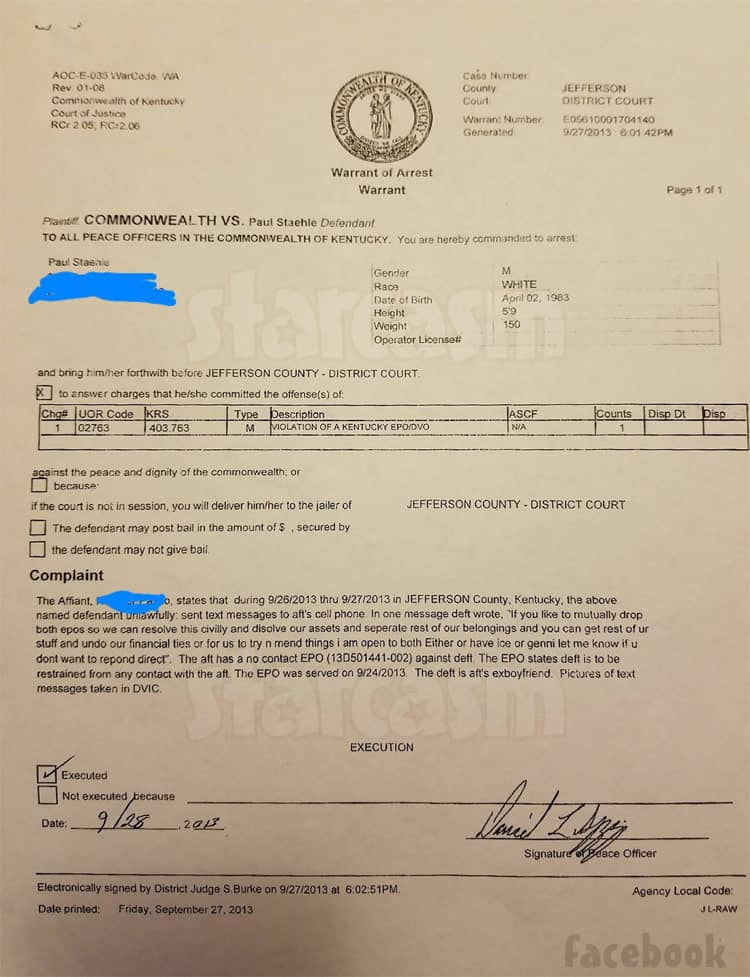 The arrest warrant (above) shows that Paul was arrested after sending text messages to his ex after an EPO was issued. In Paul’s defense, the message cited in the warrant is not only unthreatening, but quite civil. Of course, this does not address why his ex was granted a protective order in the first place, because that must have been more than just civil text messaging. Either way, I think Paul makes his point about the arrest being a little bit overblown.

Here is the full text from the warrant:

The affiant, [name redacted], states that during 9/26/2013 thru 9/27/2013 in JEFFERSON County, Kentucky, the above named defendant unlawfully sent text messages to aft’s cell phone. In one message deft wrote. “If you like to mutually drop both epos so we can resolve this civilly and disolve our assets and seperate rest of our belongings and you can get rest of ur stuff and undo our financial ties or for us to try n mend things i am open to both Either or have ice or genni let me know if u dont want to report direct”. The aft has a no contact EPO (13D501441-002) against deft. The EPO states deft is to be restrained from any contact with the aft. The EPO was served on 9/24/2013. The deft is aft’s exboyfriend. Pictures of text messages taken in DVIC.

We also might have had some light shed on Paul’s arson arrest, courtesy of a female reddit user that many speculate is actually Paul. Here is the initial post by user Rosy1996 that was submitted to the 90 Day Fiance subreddit, and instantly had fans suspicious:

As a young traditional woman I think its pretty messed up that how people are treating Paul. Here is a guy who is paying for everything to help a girl out and people treat him like hes the bad guy. I wish there were more men like that in the world.

What people dont understand is that the media can edit anybody and make them look worse than they are. They especialy do this to traditional hardworking men. Just look at what theyr’e doing to the president.

Anyway. I think Karine is very lucky to have him and if you got to know him I bet you would think hes pretty cool. (I haven’t met him in real life but I know people like him at work).

Reddit users collectively shook their damn heads and laughingly pointed out that the post was obviously written by Paul. (I have to agree that it was either Paul or someone that knows him well.)

“Im not Paul,” Rosy1996 insisted. “I live in New York. I just think it is weird that people are messaging her and trying to put doubts into her head about him.” So we are supposed to believe that Rosy is a traditional woman living in New York who is a fan of the show and has read all about Paul’s arrests in the newspaper. Perhaps I missed the 90 Day Fiance News section of the The New York Times, but this all sounds made up — and poorly at that.

Before I get to the rest of the conversations between Rosy1996 and the folks on the 90 Day Fiance subreddit, I wanted to share a couple of things she/he said in response to someone bringing up the arson arrest. “I dont think he set fire to a home,” Rosy1996 wrote. “I also dont think he planned any of it. I hear that sometimes people get arrested for even knowing about a crime or telling the police that you didn’t know about it.” On another post about Paul’s arson arrest, Rosy1996 speculated: “Sometimes as part of the plea deal you take credit for something else and that way you avoid a long trial or jail time.”

Hmmmm… So it sounds as though Paul was arrested for knowing about an arson and either not telling police, or lying to them about it. Then he may have pled guilty to the arson charge as part of a deal to avoid a trial or prison time — at least according to Rosy1996 from New York.

UPDATE – Paul has been granted an early termination of his probation stemming from the arson conviction. Click the link for details!

UPDATE – Paul has since posted a response to the allegations that he is “Rosy the traditional woman” on Facebook: “Read an article claiming I am pretending to be a woman on reddit. Whatever that is. Can Some one explain to me where this is coming from. Or what they are talking about.” Unfortunately, Paul deleted his Facebook page shortly after making the post, so I didn’t get to red the comments.

Here is a sampling of Rosy1996’s interactions — some of which have since been deleted:

REDDITOR: So …. you’re Paul’s mom or some other relation? How about his criminal past? How does that factor into his nice guy equation?

ROSY1996: Why do you have to make fun of Pauls mom? She seems really sweet and loves her son. And he seems really devoted to her since his father left.

ROSY1996: Anyway. It looks like Paul paid his debt to society and did’nt hurt anybody. Maybe he was just trying to help a friend out and with some insurance stuff. According to the newspapers it took 7 years to finally go to trial and they only did that because they did’nt want the statue of limitations to run out.

REDDITOR: What newspaper? I thought you were in NY? Can you provide a link to where you’re finding this info?

REDDITOR: Doesn’t remember which site. Or which “newspaper”… But remembers every single detail from the articles.

REDDITOR: Haha exactly, things that I doubt a newspaper would even print. Plus they know details about the show and production apparently.

ROSY1996: Yeah. NY has the internet! I read it a while back on a celebrity sight. I dont have the link. It did’nt seem like a big deal at the time

ROSY1996: The newspaper says that it is an unsupervised probation where he does’nt have to regularly report for drug tests, etc. They dont do that for dangerous people

REDDITOR: Ummm…he has NOT fully paid his debt. He is still on probation.

REDDITOR: I beg to differ that with an arson charge, no one was hurt. I suspect you’d feel differently if he set fire to your home, even if no one was physically hurt. And insurance fraud is certainly not victimless. The rest of our rates are affected. I don’t want to pay a higher insurance premium to compensate for fraudulent payouts.

ROSY1996: I dont think he set fire to a home. I also dont think he planned any of it. I hear that sometimes people get arrested for even knowing about a crime or telling the police that you didn’t know about it.

REDDITOR: So please enlighten us and tell us what happened there. Also, please tell us more about the OOP violation charge. All we have to go on is the public record, but it sounds like you have personal history with that man.

ROSY1996: Lol. I dont know Paul. I just have seen guys like him before. Anyway he’s supposed to tell his side tonight.

ROSY1996: Ok. This is ridiculous. First you think im his mom then you think im him. I cant state emphatically enough that I have never met him ever. I am just a big fan of the show. I noticed that people were kinda hard on him here so I thought I would explain that he seemed like a pretty cool and normal guy to me who is just being misunderstood.

ROSY1996: Whatever “details” you think I have are just from what I see on the tv and what I read in the papers. After that it is just guesses and interfernces based on what I saw. Im just giving my opinion about why he didnt want to go in the water or what looked strange. I have friends that worked on tv and they tell me that stuff is edited to make people look badly.

REDDITOR: As a pretty traditional woman myself, are you also the sort who think men are essentially all innocent and can do no wrong?

ROSY1996: Of course not. I would say most guys are trouble. I just think the world would be a better place if there were more guys like Paul and girls saw what a catch he is 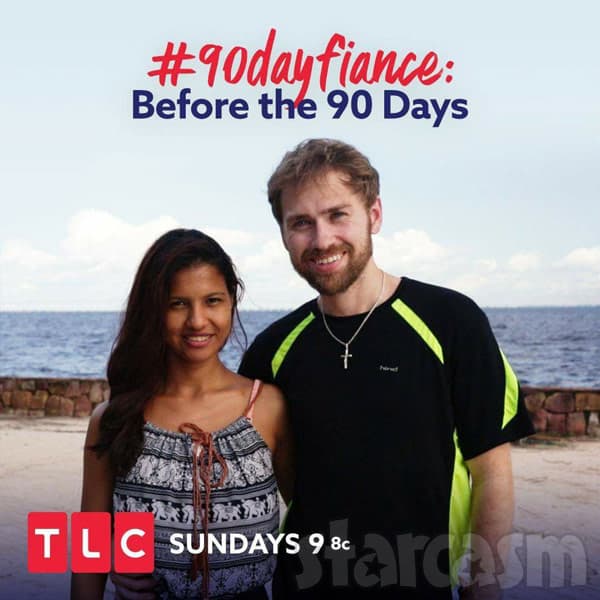 TITLE: Guy asking girl’s dad if he can take her to a hotel
This guy seems like he is pretty sincere and wants to build a life with her. Plus they edit stuff alott on TV. I think she is lucky to have a guy like that pay for all her stuff

Rosy1996: Why are you incapable of seeing Paul from Karine’s perspective?
I dont think Paul asked her dad to bring her to the hotel to sleep. It was the middle of the day. Maybe Paul just wanted a private place to give her the presents she wanted and didnt want to make her siblings jealous. That s what I got from the episode any way.

Plus I’ve heard the show isnt edited in order and the producers ask questions to get clips they want.

does anyone get weirded out when the specifically american halves say things lkke
Some of the American guys on the show seem pretty chill. I just think the show edits them to make it look worse. Plus alott of the girls are’nt as innocent as the show would make you believe

Why are you incapable of seeing Paul from Karine’s perspective?
Maybe he did’nt actually do arson. Sometimes as part of the plea deal you take credit for something else and that way you avoid a long trial or jail time.

my theory is that jorge and anfisa are still together
That’s what I mean. I hear they make you sign papers on these shows where you aren’t even supposed to defend yourselves on social media and then they edit and script it for ratings. Luckily there family and friends know this

Meanwhile, the real Paul seems to have gotten into a bit of hot water with show producers for things he has said as himself on social media. He posted last week on Facebook explaining that he and Karine would be scaling back their social media presence to avoid any more potential violations of their contracts:

We return this sunday . TLC 8pmEST until 10pmEST. Due to current filming and production to secure many show details and secrets. Our social media will be extremely limited on public posts. Remember this is Reality TV . Any thing can change at anytime. I will post bonus videos of everything up until this point that has aired. And pictures from my past.

You can continue to follow Paul and Karine (and Rosy1996?) with new episodes of Before the 90 Days airing Sunday nights at 9/8c on TLC.

SPOILER Did 90 Day Fiance’s Jason and Cassia get married?