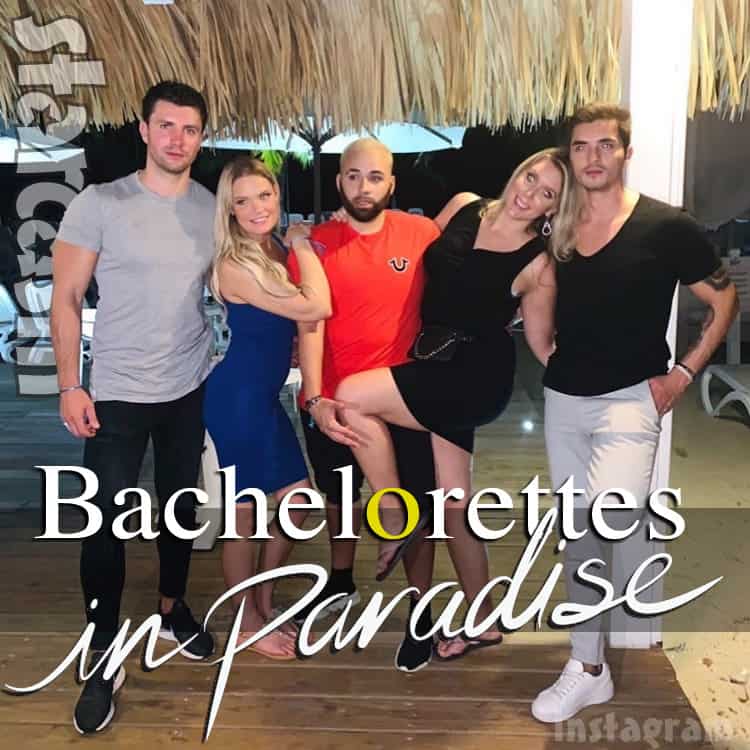 Two ladies from the 90 Day Fianceverse may be returning to reality TV on a brand new series! 90 Day Fiance and Happily Ever After star Ashley Martson is currently on vacation in the Dominican Republic with Before the 90 Days’ Cortney Reardanz, and we have a source that reveals their trip is being documented as a pilot for a potential new show!

In case you missed it, Jet Set Vacations and Jenny Peltz-Phillips from TravelByJen.com organized a reality star and influencer vacation package from November 5th-9th that was billed as “a 4 night all inclusive adult only getaway” to the Viva Wyndham V Heavens resort in Puerto Plata, Dominican Republic.

Speaking of cameras rolling and sexual tension between men and women in exotic locales, Ashley and Cortney are already making headlines with a rather risqué video recorded at a resort club:

In the video, Ashley is the meat in a Bachelor In Paradise sandwich between man buns Kamil and Christian. Later, Christian can be seen slapping Ashley’s leather-clad booty, and also grabbing her hair and thrusting her head at his crotch.

A seemingly quite tipsy Cortney joined in on the fun as she straddled Antonio Velaz on the floor, just before getting bumped from behind by Christian. Cortney fell off of Antonio, then stumbled and flashed her unmentionables trying to get up.

Although it could just be hype to stir up the rumor mill, The Domenick Nati Show host Domenick tells Monsters and Critics that Ashley and Kamil may have taken things a little further than just dancing! He says there was a party in Christian’s room with numerous people in attendance, including Ashley and Kamil.

“She left Christian’s room and went to Kamil’s room,” Domenick says of Ashley. “There’s a group text that they are in and someone showed me messages of Kamil making jokes with Ashley about sex the night before.”

In the video above, Kamil can be seen the next morning with a bit of bedhead. “This is what I look like after sex,” he says. “Sh*t was good! I had her upside-down in the shower,” he adds.

If you’re curious, Ashley is still technically married to her estranged Jamaican husband Jay. The two reportedly got back together in September, but parted again after rumors surfaced that Jay was cheating yet again and may have gotten a woman pregnant.

In addition to the potential hook ups, there has also been a potential dust up as well. Antonio Velaz shared a video in his Instagram stories that looks to be the aftermath of a poolside altercation between him and another man!

As far as the potential new series, it’s unclear if there is a specific network attached. Our source says that neither VH-1 or TLC are connected to it yet, and we’re leaning towards a potential home on WE tv.

If the pilot does get picked up, it will be the first instance of a former cast member from the 90 Day Fiance franchise appearing on another show. Amazingly, that includes no appearances (so far) on Marriage Boot Camp. I believe the closest we came to a cast member appearing on another reality show was a potential From Not To Hot inspired makeover show featuring Danielle Jbali, which fell through after Danielle had a falling out with her former manager.

In contrast, numerous cast members from the 90 Day Fiance franchises have appeared on reality shows before appearing on TLC. Here are just a few examples:

Patrick Cornet was on no fewer than SIX different reality series prior to being on Before the 90 Days, including several competition shows.

#90DayFiance #BeforeThe90Days Darcey and Stacey have been #Twinning for a looooong time! Check out the pilot episode of their reality series #TheTwinLife! https://t.co/9tLofgCYGr pic.twitter.com/W3TAuvNxOx

Darcey Silva made a brief appearance on Million Dollar Matchmaker, and even filmed a pilot episode for a series titled The Twin Life with her sister Stacey.

There’s no word yet if Ashley’s ex Jay has any plans to follow up with his own return to reality TV. Perhaps he should team up with his tattoo studio bros for Black Ink: Mechanicsburg?

Everything Zen – Gavin Rossdale shirtless at the beach