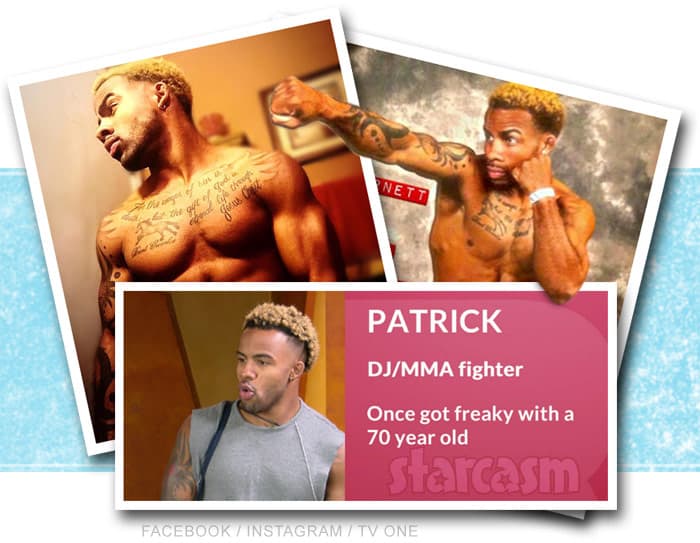 The premiere season of Before the 90 Days is well under way, but we still have two couples we have yet to meet. This Sunday viewers will be introduced to 25- (now 26-) year-old Patrick Cornett of Lexington, Kentucky. Actually, this may not be the first time you meet Patrick as he has spent A LOT of time in the public eye already as an MMA fighter, a DJ, and as a veteran of multiple reality shows, including American Ninja Warrior!

More on Patrick’s AMAZING resume in a minute. First I wanted to cover what we know about his story line on Before the 90 Days. Patrick’s story has a bit of a European theme as it combines France and Italy — France because he will be traveling to Paris to meet his potential fiancée Myrian, and Italy because that is the name of his now 3-year-old daughter.

You can get a brief glimpse of Patrick, Myriam, Italy, and France in the Before the 90 Days preview trailer, which isn’t embeddable for some reason. Here are a few screen caps: 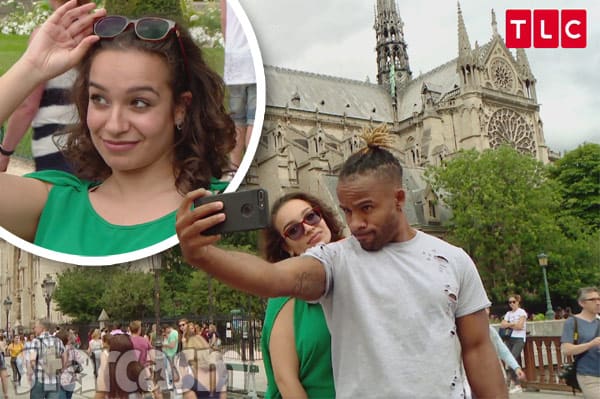 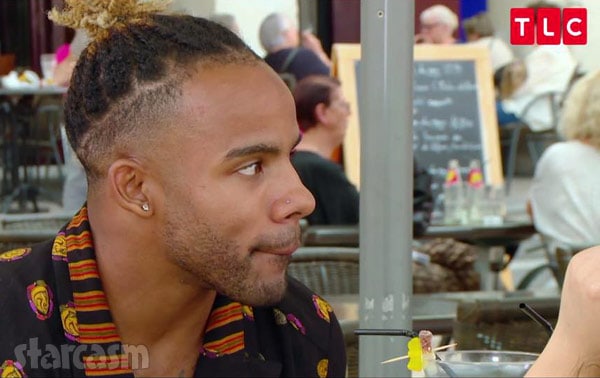 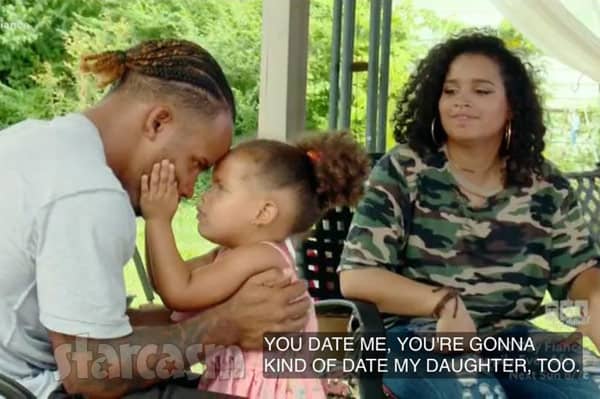 As far as spoilers go, I’ve got nothing for you. Patrick is ALL OVER social media, including tons of posts promoting his appearance on the show, but there is absolutely no mention of Myriam in words or pictures. He did boast that his story is “Gonna be crazy as hell!!!” Not that that’s anything new for Before the 90 Days. “The series is already crazy tbh,” he admitted.

Patrick appears to be a late addition to the cast as his trip to Paris was just last month, so I’m a little worried that perhaps his love story line may be a bit weak.

One thing that isn’t weak, though, is Patrick himself! As I mentioned above, he is a veteran MMA fighter who fought (fights?) as a Bantamweight. Here’s one of his fights followed by a clip montage:

In addition to being a fighter, Patrick was a standout high school football player. As a running back for Bryan Station High School during the 2008-2009 season, Patrick averaged more than 130 yards per game en route to amassing 1,444 yards and 16 touchdowns! You will soon learn that there is little in Patrick’s life that he hasn’t documented on Youtube, and his high school football career is no exception. Check out this Tecmo Bowl worthy highlight reel:

Ah, but athletics and video uploading aren’t Patrick’s only skills! He is also a DJ who pays tribute to his own array of diverse talents with the moniker DJ Skills. Yep, there are videos…

No crowd is too big or too small for DJ Skills!!! Let's get it!!! pic.twitter.com/CxebS7imzU

And here is DJ Skills transforming on stage into Magic Patrick:

Worlds most entertaining DJ!!!!! Had last night LIT!!! You get your money's worth!! ? : @valentinolucas pic.twitter.com/9cjiYK38Gb

Normally, appearing on a reality show like Before the 90 Days would be a once-in-a-lifetime kind of experience, but for Patrick, it’s not even a once-in-a-year’s-time experience. He showed off his athleticism earlier this year by competing on American Ninja Warrior! Amazingly, Patrick didn’t share a video of…JUST KIDDING! Here’s his audition reel:

And here is a local interview with Patrick (from just last week!) about his appearance:

Despite all of the notable things described above, I think what Patrick does best (and most often) is hustle for reality show gigs! He mentions in a Facebook post that he has appeared on six television shows — which I assume includes American Ninja Warriors and Before the 90 Days. I really cannot imagine the amount of work it takes to get on that many shows! As an example of that work, here is an audition tape Patrick made for a dating show last year:

Patrick appeared on the TV One dating reality series The Game of Dating earlier this year — I’m not sure if that is what this audition was for. I did a little scrounging and found the full episode featuring Patrick, in which he goes on a pole dancing date with a celibate ex-dancer:

I love the intro graphic for Patrick! I didn’t watch the entire episode, so I’m not sure if he has an opportunity to explain the “once got freaky with a 70 year old” thing: 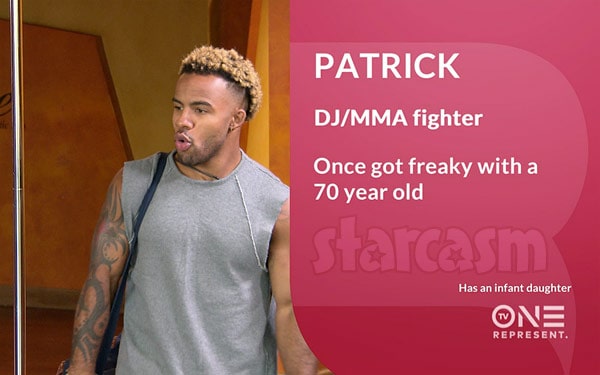 In very rare reality show feat, Patrick actually appeared on TV One and CMT! He was on Steve Austin’s The Broken Skull Challenge last year. (There are photos, etc. but this post is already getting too long.)

Patrick also appeared on MTV on some sort of show where people go on a date while watching a movie that is airing on MTV at the time? Dang, there sure are a lot of dating reality shows out there!

I kinda hope Patrick keeps up the audition hustle and somehow makes it onto The Bachelorette. You just know the producers would see his MMA credentials and arrange some sort of boxing themed date challenge. I just know Patrick’s smack talk before and after would be absolutely golden! (Assuming the other guy didn’t have to go to the hospital or anything.)

Oh, and I guess I should also mention that Patrick is an artist — as in visual artist. Here is a drawing he did of himself and daughter Italy: 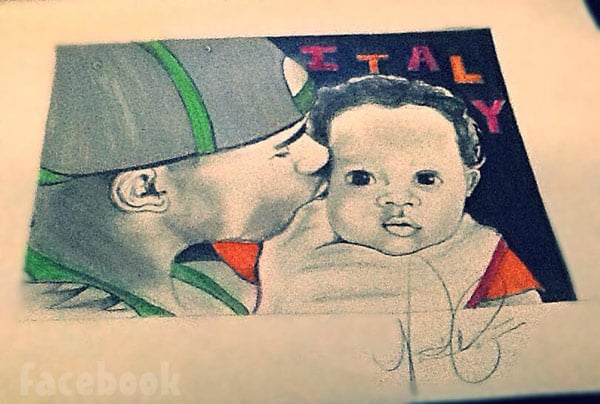 In case you were curious about Patrick’s personal life, the mother of his daughter Italy is a Youtube Vlogger and she has nothing but AMAZING things to say about him. She says that Patrick is incredibly supportive, and although he is often out of town for work, he always makes sure to call every day when he is away. If the mother of your child (who you are no longer with) has nothing but good things to say about you, then you must be a pretty good guy, right?

Be sure to tune into Patrick’s TLC debut (I’m pretty sure?) on Before the 90 Days this Sunday night at 9/8c.

UPDATE OCTOBER 23 – It seems Patrick is catching a lot of heat for his extensive TV resume because of our article. He just posted the following on Facebook:

I was going to wait until after the shows, but I got casted for 2 athletic shows due to my MMA career and I’m a reality tv star? Where did these people get 6 tv shows from? I appreciate the real fans & supporters though!!

As far as the number six, as I mentioned in the post, it was Patrick himself that said he had been on five other TV shows in addition to his appearance on American Ninja Warriors — and this was prior to anyone knowing about Before the 90 Days. Someone linked to this article in the comments section of Patrick’s post and Patrick replied with: “And that’s why I said it’s crazy smh.” The commenter points out that we said the number came directly from him, and he responded with: “negative”

So here is the receipt — Patrick’s Facebook post from early July in which he was complaining about the fact that another Lexington, Kentucky man (who was white) was cast on American Ninja Warriors and was interviewed by the local news, whereas Patrick reached out to multiple news outlets and couldn’t get a single one to do a story about him:

Granted, I do not know what the other shows are, and it could very well be that they are not “reality shows” — even the athletic or dating variety. But, I listed four examples above, and we can add in Before the 90 Days now. So I guess the official tally would be seven TV shows, five of which I would consider “reality shows,” although Patrick seems to think differently. The other two shows I don’t know anything about.

Also, I want to point out that Patrick not only shared our post in his Facebook timeline, he also gave us a shout out and even commended us for all the research we did putting the post together — so he clearly read the whole thing: 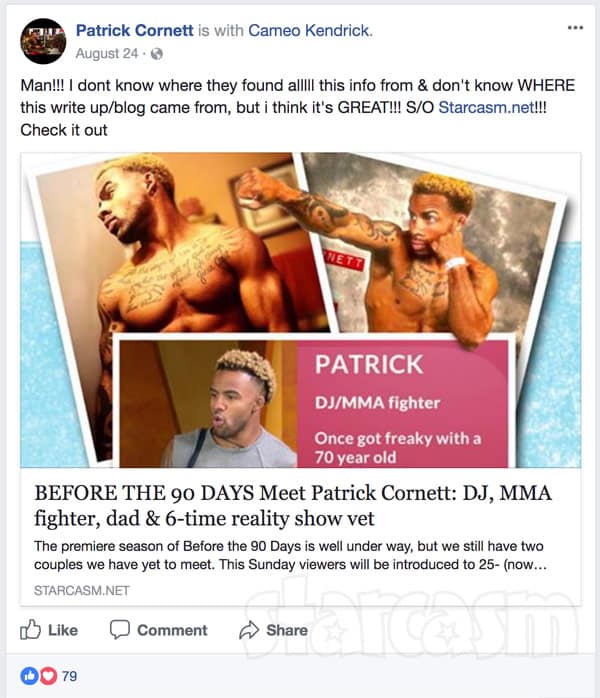