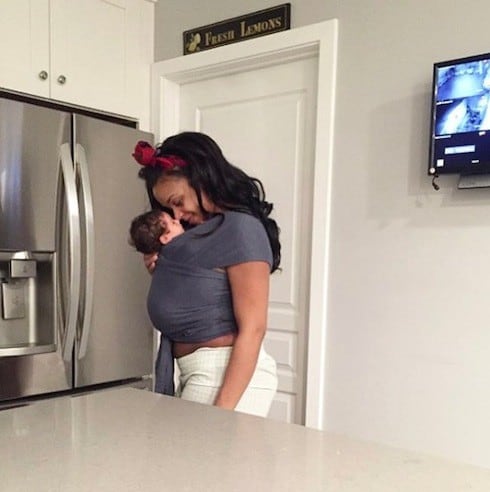 Serious allegations involving Love & Hip Hop Hollywood‘s Masika Kalysha spilled into public view this week and have apparently re-opened a major rift between Masika and two of her LHHH cast members. According to the report by Fameolous, the Masika Kalysha baby neglect rumors involve Masika’s daughter Khari finding and eating a tablet of Xanax.

The anonymous tipster on whose word the report is based report claims that Khari–whose one-year birthday is on March 29–”found [the tablet] in a friend’s bag and ate it.” The report further suggests that Masika took Khari to the hospital, but “didn’t want to stay.” When she left the hospital, “the nurses called DCFS”–the Department of Child and Family Services–and reported the child’s condition.

Shortly after the report went public, a lawyer said to be representing Masika reportedly claimed that the article violated Masika and Khari’s privacy and the entire article be taken down. However, in doing so, the lawyer appeared to confirm that the Masika Kalysha baby neglect rumors were true, if only to the extent that DCFS had begun investigating them. (So, if you want to get very specific, the lawyer’s letter could be interpreted as confirmation that the rumors themselves do exist.)

But the more immediate fallout appeared to come from two of Masika’s LHHH cast members. Apparently, both new LHHH addition Alexis Skyy and old cast member Hazel E, who’s rejoined for Season 4, refused to film the day’s scenes when they heard the Masika Kalysha baby neglect accusations. And Hazel went a step further, screengrabbing part of the original article on her Instagram page and captioning it with a taunt in a since-deleted post: 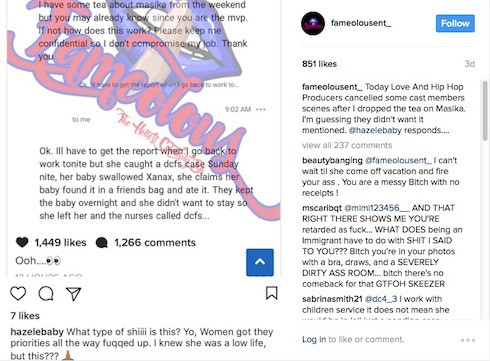 The taunt apparently brought out a truly vehement response from Masika. Here’s a second screengrab of what’s allegedly her retort–though you’ll notice that there’s no IG account name attached to the response: 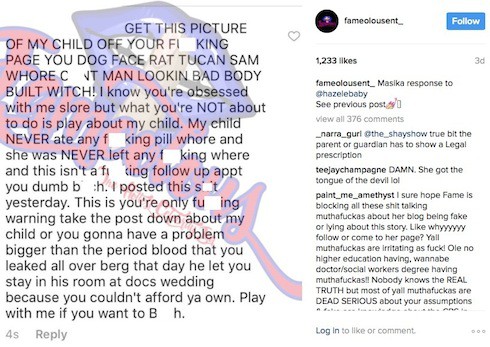 Whether the accusations against Masika are true or totally bogus, it seems unlikely that they won’t get at least a little bit of attention on Love & Hip Hop Hollywood Season 4. New episodes begin airing this June.