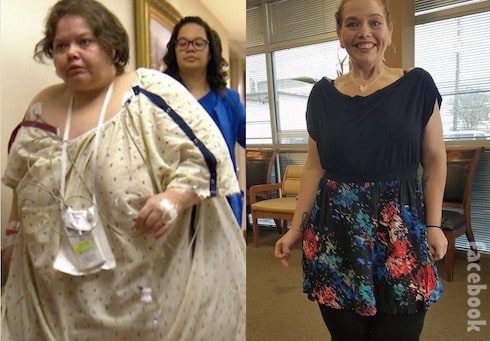 As you can tell from just the photo above, Brittani Fulfer has come a very, very long way from her first My 600 Lb Life Brittani episode. That episode, which depicted an absolutely miserable person even by the show’s standards, was notable for Brittani’s painfully vivid descriptions of herself: both in body and in self-esteem.

Brittani, who explained that she believed her obesity stemmed from the sexual abuse she suffered as a child, at one point even said that living in her body was “pain and sadness”:

“Every single day, I look in the mirror,” Brittani said, “and I’m like, ‘What did you do yourself?’…it is the most disgusting thing in the world.”

TLC’s cameras filmed the My 600 Lb Life Brittani episode throughout 2015, and it aired on January 13, 2016, so we’re now just over seventeen months removed from the date many of Brittani’s fans and supporters met her. The “after” photo in the side-by-side at the top of the article (which already looks amazing) was taken this past April. But, for comparison’s sake, here’s the very most recent photo of herself that Brittani has shared, from just a couple of weeks ago:

The simple fact that she’s posing with a professional photographer says a lot about how far she’s come since the My 600 Lb Life Brittani episode first aired. The infectious smile she wears in so many of her latest photos says even more 🙂

But Brittani is also forthcoming with info, advice, and encouragement for her followers, many of whom are trying to emulate her success. The Q&A she sat for this past May was full of all three — you can check out the full video and see Brittani’s many individual comments here; we’ve laid out a handful of the most popular questions below:

How many calories do you get per day on Dr. Now’s pre-surgery diet?
“I was put on 1200 calories, no snacks high protein super low carb. Only eating 3 times a day. I personally wrote everything down that I put in my mouth. I ate no fruit, no pasta, no bread, no rice, and lots of water.”

What’s the hardest thing you’ve encountered since losing all the weight?
“I would say getting used to not being the fat person. I still think I weigh 600lbs. So what I see in the mirror doesnt match the image in my head. And the excess skin on my legs, it hurts it pulls.”

How do I find motivation? It’s so hard to get started without support…
“I was legit sick and tired of being sick and tired. For me I knew I was going to die maybe not physically but emotionally and mentally if I did not change. So my motivation is to live my true life and to live so I can have a family.”

First swim of the year! pic.twitter.com/MJJhQDQoQq

How do you fight your cravings? (I’m two years in and having a hard time snacking when I’m stressed or bored.)
“I try to occupy my mind. I am in school so I do school or I go for a walk with my dog. I also call or text my friends. I am quite annoying at times!”

What do you plan on doing to celebrate when you get to goal?
“I set little mini goals for myself. Each time I usually do a little something special for myself. It usually involves buying new clothes, or getting my nails or hair done. But my big final goal, I honestly do not know how I am going to celebrate! I should probably start planning though, cuz I am real close!”

What’s the best thing you’ve done since you lost the weight?
“Probably the best thing I have done, is being able [to] travel. Ohh and clothes shopping.I love me some clothes!”

Brittani sure wasn’t kidding about loving to travel–in the past month alone, she’s taken a trip to Colorado to go zip lining; gone to Oregon “to do a 5k” (as an associate of the Weight Loss Surgery Foundation–plus let’s not overlook that participating in a 5k is a seriously impressive feat!); and went to California “to be a tourist.”

As far as clothes go, we’ll take that opportunity to lay out another recent pic she shared–this one a side-by-side of herself and her husband Bill (who, it should be noted, has lost 70 pounds over the past two years): 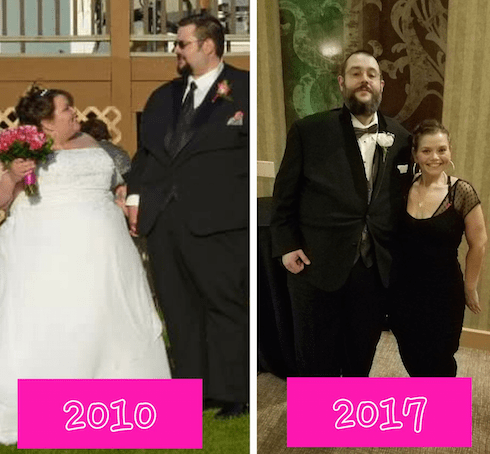 *Major* congratulations to Brittani on all the success she’s had, both physically and mentally, since her episode first aired. It’ll be fun to see how she does wind up celebrating when she hits her final weight loss goal–and it sounds like she doesn’t have much longer to go!