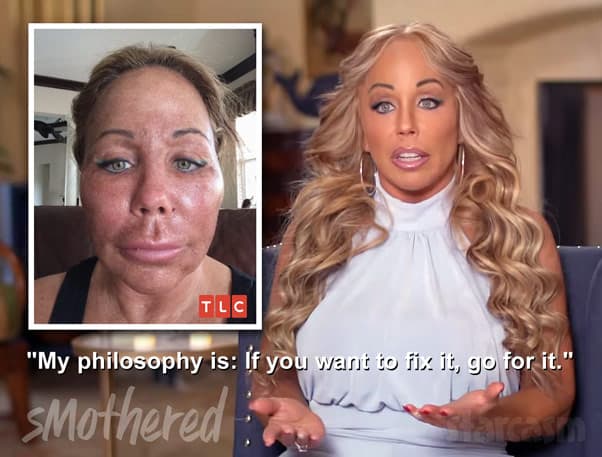 On tonight’s episode of TLC’s divisive sMothered reality series, mom Mary talks her daughter Brittani into getting mother/daughter colonics together. Sharing that kind of experience with a million television viewers is not something most folks would be comfortable with, but Mary doesn’t seem to be one to worry about what people think. Just before pitching the co-colonic idea to Brittany, Mary shared details on her numerous plastic surgery procedures over the years, including some very dramatic photos!

“My philosophy is: if you want to fix it, go for it,” Mary says about going under the knife for cosmetic reasons. “I’ve always felt that having plastic surgery, if it’s gonna make me feel better, I’m gonna do it for me, for my self-esteem, and not care about what others think.”

Mary then shares some details on some of what she has had done. “I had lipo, my upper and lower lids done, and I had a fat transfer done where they actually took fat from another part of my body and injected it in parts of my face.”

Mary’s commentary was accompanied by several photos. Here’s one of her face, I assume after she had fat injected: 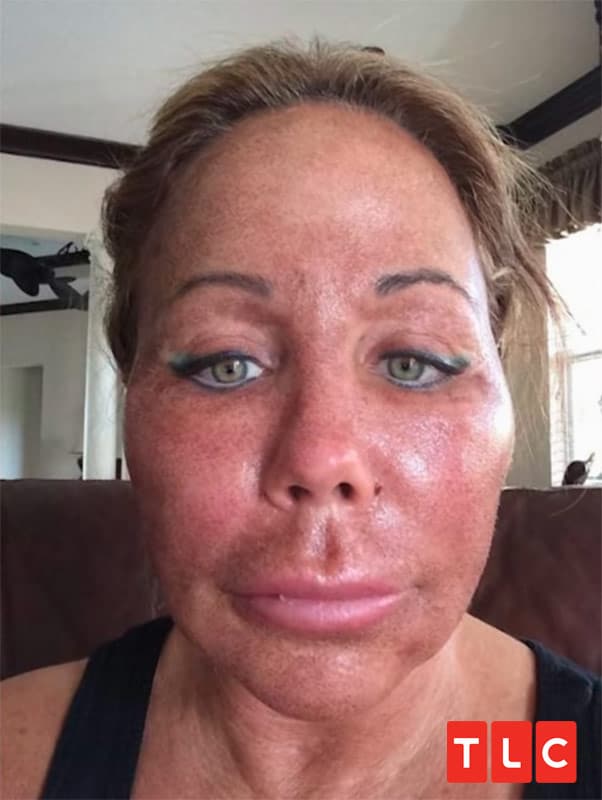 The other two images are a bit too graphic to include in the post. You can CLICK HERE to check out her post-op eyelids, and HERE for her face soon after the fat injections.

Mary says she’s had “about five” breast augmentations. TLC shared one photo, but it was completely blurred out.

For those of you curious to see throwback photos of Mary before her plastic surgeries, I was able to track down a couple images on Facebook. I’m not sure which procedures she had done prior to the photos being taken: 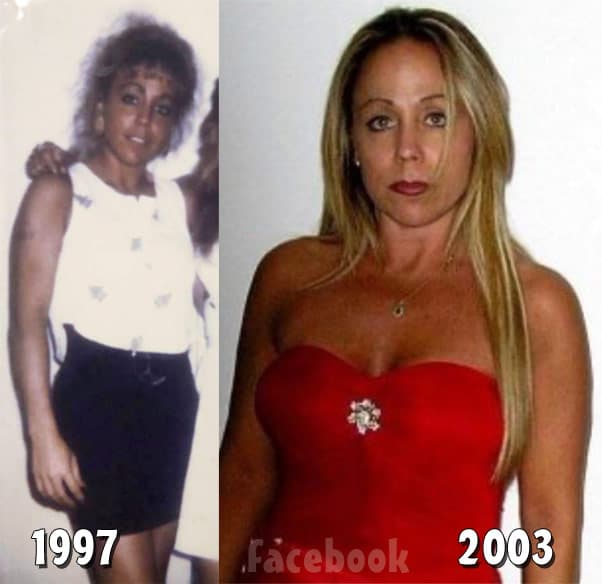 After talking about her numerous plastic surgeries, Mary makes her colonic pitch to her daughter Brittani. For context, Brittani has admitted to having serious weight issues, and she followed in her mom’s pro-surgery footsteps by electing to have gastric sleeve weight loss surgery as soon as she turned 18.

“How about we get colonics done?” Mary asks Brittani as the two catch some rays poolside. “Why don’t we just do that? They kind of stick a tube up your butt.”

Mary continues her pitch: “It shoots water inside you, but I think what it does, it actually goes all through your your intestines.”

Brittani says that she can’t get the image of a straw out of her mind.

“Mom!” Brittani replies. “Why would I stick a tube up my butt? I don’t ever want to stick something up there!”

Mary argues that the process makes you feel “lighter” before then using the weight loss angle to sell the idea. “You can actually lose a couple pounds after they flush you out,” she claims. “And then you’ll look fabulous! you won’t have to worry about your little tummy that you got going on there.”

Mary then demonstrates on Brittani what the results will look like by pulling her tummy tight. Brittani eventually concedes and agrees to get a colon cleanse with her mom.

The scene cuts to Mary doing a solo interview in which she seems to contradict what she was saying in front of Brittani. “She doesn’t need anything, to be honest, because my daughter’s perfect,” Mary says. “But, I’ll do whatever she wants me to do. That’s what mommies are for,” she adds.

For all of you clamoring about the lack of mother/daughter colon cleanses on television, your prayers will be answered with the new episode of sMothered airing tonight at 10/9c on TLC.