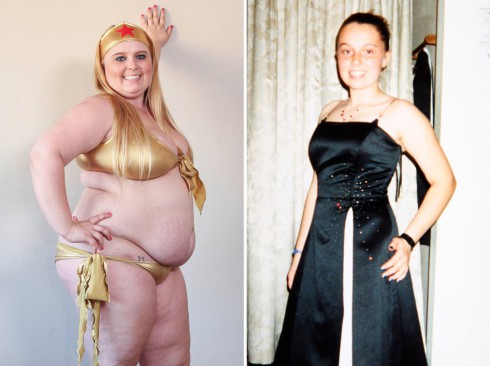 Her daily eating goals sound like guilty fun at first, but then then turn into gavage (a term for both force-feeding ducks to fatten their liver for foie gras, and a practice among some African young women to “fatten” up to be suitable for marriage. In a recent episode of the HBO show Vice, they followed some women participating in this practice who would eat bread crumbs and olive oil and drink goats milk all day until they threw up.)

“I start the day with a huge breakfast of waffles, cream cheese, bacon and sausage then head to McDonalds for a few burgers in the afternoon,” she told the HuffPost UK, “I can snack on cheese all day, a couple of blocks is no problem, then for dinner I’ll either eat pizzas or make Mexican food.”

This is overkill already, but the eating has just begun. When Tammy becomes too full to contemplate more food, her 28-year-old feeder boyfriend Johan Ubermen funnels a mixture of “heavy whip cream and a whole tub of ice cream” into her mouth. “The funnel forces me to drink the shake even when I’m full after a day of eating.”

Of course, doctors have warned Tammy that she’s endangering her health, but she isn’t too concerned. She feels like she’s doing what she wants to do, and says she’s satisfied with her life and how she looks. She used to be much thinner, but says she started feeling self-conscious when she gained a few pounds after giving up sports. “At first I was in denial,” she says. “But one day I looked in the mirror and realised I was fat – and I felt great about it. My body looks so sexy and I feel more womanly the heavier I get.”

Right now her family has no clue that Tammy’s current weight gain is planned. “My family have noticed that I am putting on weight but they still don’t know I’m doing it on purpose. They probably wouldn’t agree with it but I’m making a living and supporting myself.” 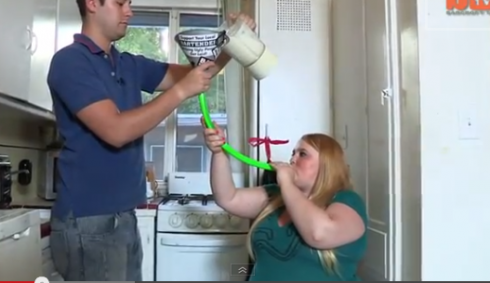