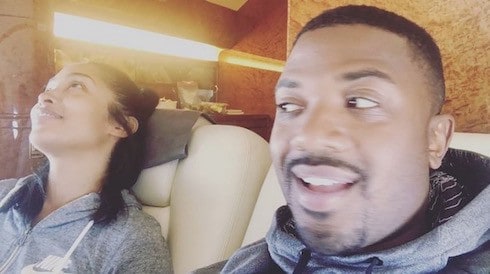 When last we checked in with Princess Love and Ray J, the Love & Hip Hop Hollywood couple was teasing what sure looked like the addition of a new member of their family, via a mysterious expansion of their house and some cheeky Instagram updates. But now that LHHH Season 4 is about to conclude, is Princess Love having a baby…or will we have to wait until next season for confirmation?

The couple’s two most recent high-profile interviews by offer plenty in the way of gossip fodder. The first comes courtesy of Ray J, who appeared on The Breakfast Club a couple weeks back in promotion of his play Thugs and the Women Who Love Them. Charlemagne straight-up asked Ray if he had a baby on the way–in fact, he put it matter-of-factly, like it wasn’t even a question: “But Ray, you got a baby on the way, right?”

Ray paused before saying “I’m still trying,” and then pivoted to note that “Time is ticking” for his unmarried female friends. “Especially,” Ray said, “since I did what I did.” Then–probably because it wasn’t clear whether Ray meant that he got married or whether he accidentally revealed that Princess Love is having a baby–it gets suuuper quiet for about three full seconds–an eternity in radio time.

After that, Ray tries to play off how quiet it got like it’s no big thing, and over-acts how uncomfortable he is about his (formerly) low sperm count despite hashing that whole ordeal out in front of Love & Hip Hop‘s cameras. It’s suspicious!

Here’s the full interview; skip ahead to 7:30 for the pregnancy and sperm exchange:

Around the exact same time, Princess Love went on The Real and dished about she and Ray J’s sex life. Apparently, things are going fine, except that Princess is a bit picky about how and when she’ll get down.

But, when all four co-hosts expressed genuine horror at Princess’ persnickety ways, Mrs. Ray J explained her line of thinking: “It takes the focus away….I start, like, looking around the room, on the wall, the ceiling–I can’t….You can still see–it doesn’t have to be pitch-black; it just has to be moody.”

Princess also revealed her one forbidden fantasy: “I’ve always wanted to do it on a private jet.”

Speaking of which, let’s check in and see how Princess and Ray J traveled to New York City for the Love & Hip Hop Hollywood Season 4 reunion taping:

#ad Why is my tummy redemption time starting right now? For one, @flattummyco dropped this killer sale so everything is up to 25% off (LOVE a good deal ladies) and two… well, consistency is key, and I’ve always been pretty bad at it, so Shake It Baby is pretty perfect for me. It tastes good, so I actually want to drink it, and it’s clinically proven to deliver real results, soooooo I’m game ladies. I’m ready to get this little tummy moving, are you? Hit up Flattummyco.com for the sale deets, and get ready to shake it with me girls.

It’s possible we’ll get a shocking reveal of Princess Love’s pregnancy during the first part of the reunion special tonight–though, if we get one during the reunion at all, it’ll more likely come during Part 2 next week (so it can overshadow Alexis Skyy’s baby daddy news). Whether we get a definitive answer or not, expect plenty of gossip and news about Princess’ pregnancy trials during the LHHH hiatus and well into Season 5 next year.

(Photo credits: Is Princess Love having a baby via Instagram)

Kim Zolciak shows off growing pregnant belly in her underwear