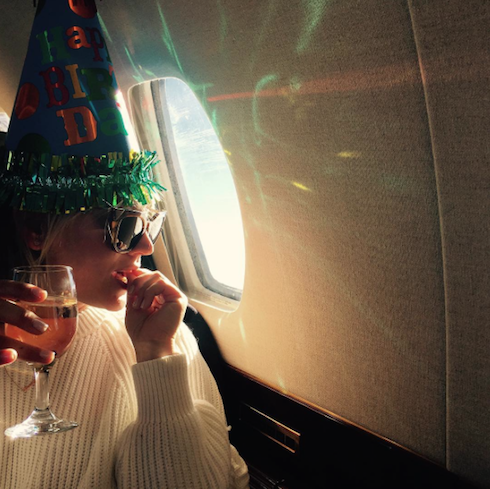 It’s been kind of a rough year for Kaley Cuoco. Her divorce has taken up most of her time since she and soon-to-be-ex Ryan Sweeting announced their split this past September. A few weeks ago, while speaking at a charity event, Cuoco broke down in tears in the middle of her speech, though she was able to pull herself together and finish to rounds of applause. And, just last week, Cuoco decided to erase one of the last remaining memories of her marriage, by getting a fresh tattoo (of a moth, no less) atop what had been  a tattoo of her wedding date.

If there’s one thing we know about Kaley Cuoco, though, it’s that she is an animal lover through and through. She owns a passel of dogs, rides horses on the regular, and keeps her social media fans updated on her many animal-based adventures with frequent photographic updates. It was perhaps unsurprising, then, when a dozen of Kaley’s friends got together to throw her a surprise 30th birthday party at a wildlife sanctuary…and that Kaley documented the crap out of the party on Instagram.

Though Cuoco’s birthday is actually today (and it’s her golden birthday, no less!), the friends snagged KC and whisked her away this past weekend:

(When you need two planes to get where you’re going, it does not hurt to be the highest-paid woman on television. Or to have rich friends. #goodproblemstohave)

From there, the baker’s dozen jetted over to a preserve overseen by the Black Jaguar White Tiger foundation. Kaley’s little sister Briana, who turned 27 on Sunday, was also along for the trip:

Starting off my 30th year with a roar ? … Surrounded by my best friends and all the lions and tigers I can count ? @blackjaguarwhitetiger #ithinkthismustbeheaven #cuocosistersbirthdayextravaganza

Very serious conversations being had at the @blackjaguarwhitetiger sanctuary ? #cuocosistersbirthdayextravaganza

And, to top the whole Kaley Cuoco birthday off, the star shared a photo of herself and the twelve conspirators who brought everything together:

Serious squad goals … 12 bffs on the trip of a lifetime! #cuocosistersbirthdayextravaganza @blackjaguarwhitetiger #zombies