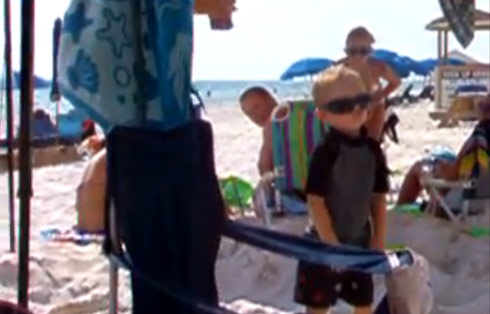 Teen Mom Maci Bookout has a budding star on her hands in the form of her cutie pie son Bentley. While everyone in the TM universe discusses Ryan and Kyle we all know who rules the roost in Maci’s world.

Through all the drama that comes out on the popular show it’s great to get a reminder of what it’s all about and that’s the kids. Recently Maci took a little vacay on Panama City Beach, you can check out bikini pics here, and I found the following extremely brief but wonderfully joyful clip of Bentley getting his groove on to Michael Jackson’s “Thriller.” You can see mom in the background as someone cheers on Bentley’s moves.

I’ve got the clip set to loop so you can get repeated joy from the super cuteness:

The king of Teen Mom not named Kyle dancing to the late king of pop. Actually Bentley isn’t the only one infatuated with Michael as Kyle recently tweeted the following:

We were kind of meh about the recent cast announcement for Dancing With the Stars and I know Maci would like to give it a try but now I know who should’ve been selected. Bentley rocks 🙂