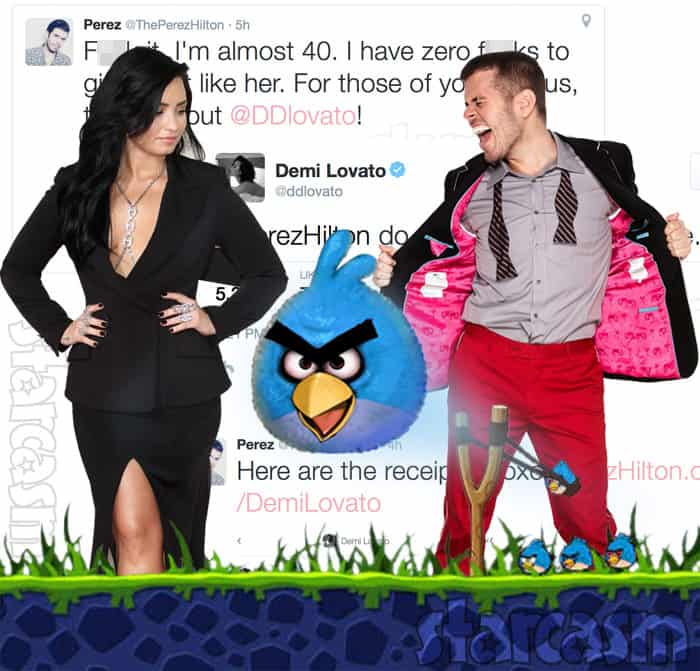 It’s been a while since we’ve had a good old fashioned Perez Hilton Twitter feud with an A-list musician! Today the celebrity blogger got into a very heated exchange with singer Demi Lovato over some DMs about tweets he “liked.” Perez even went as far as to show receipts in the form of screen caps of the DMS Demi sent him!

Here’s how the whole thing played out on Twitter:

If you're petty af and vocal about it, you're inviting criticism and the public commenting on your words and actions! xoxo

.@ddlovato sent me a DM on Twitter upset that I liked some tweets about @MariahCarey that she was tagged in. https://t.co/bVZEQ64258

I'm nice to the people I feel deserve me being nice to. I'm done being fake with @ddlovato.

Here are the “receipts” again in case Perez deletes them: 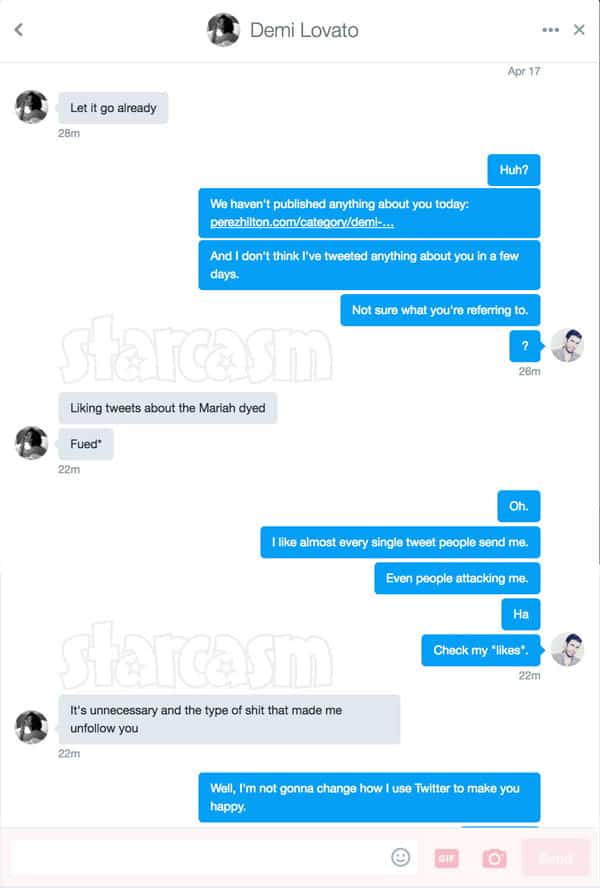 As you can tell from Perez’s conversation with Demi, she wanted him to “let it go” and stop liking tweets about her feud with Mariah Carey. Perez responds: “Oh. I like almost every single tweet people send me. Even people attacking me. Ha. Check my ‘likes.'”

Demi doesn’t find it funny at all. “It’s unnecessary and the type of sh!t that made me unfollow you,” she wrote.

“Well,” writes Perez, “I’m not gonna change how I use Twitter
to make you happy.” 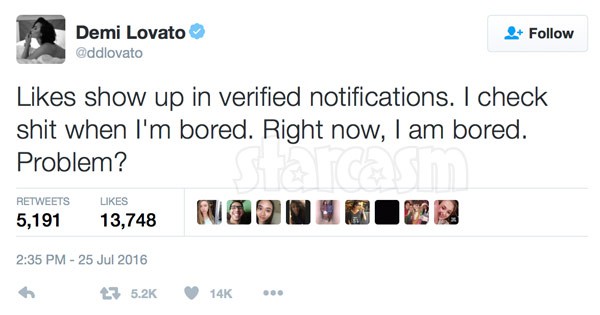 I definitely wouldn’t have guessed going into this post that I would come down on the side of Perez Hilton, but I have to agree with him on this one. It seems ridiculous to ask that someone stop liking certain kinds of tweets. And I can confirm that Perez does like just about any kind of tweet about him because he has liked some of our not-so-positive tweets about him in the past. Hell, he even retweeted a couple of them.

Soon after their little spat, Demi deleted all her tweets about it, but Perez had a little fun retweeting folks who ran with the #PerezExposedDemiParty hash tag. He later moved on and began to tweet about the Democratic National Convention — at which Demi Lovato gave a moving speech on mental illness. Someone called out Perez for pettiness in light of Demi’s speech, but he was quick to express his admiration for what Demi said:

Perez then took a moment to revel in the spotlight a bit:

My Twitter is lit right now!!! And I love it!! #PerezIsOverParty pic.twitter.com/Ec7hQ3bnDO

I assume that will be the end of that, but stay tuned in case Demi Lovato can’t resist stoking the flames.