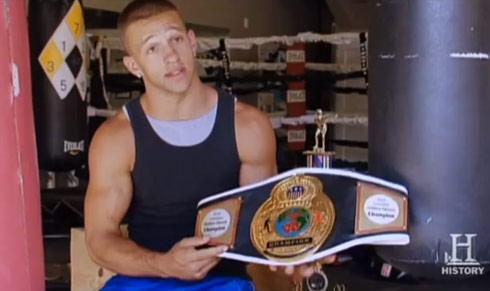 Alligators aren’t the only scary things Swamp People‘s Jay Paul Molinere does battle with because when he’s not in an air boat with pop RJ Molinere Jay Paul is in the boxing ring working on his people fighting skills! As we mentioned in our profile on the father/son reptile hunting duo, Jay Paul is an accomplished boxer and Mixed Martial Arts fighter.

Jay Paul recently recorded a video with The History Channel in which he talks about how he got started in the ring and how the skills he learns inside the ropes translate to “fishin’ gators” in the swamps of Louisiana:

Here’s some of what Jay Paul had to say in the clip:

“I started boxing when I was six years old. I was always the smallest, always the youngest. My dad always said, ‘Look you need to learn how to fight ’cause it’s gonna get rough at that age.’

“I started fighting as a way to keep my time occupied because being hyper like I was I would be getting into something – I needed something to control my thoughts and keep me active always. I t was just a good past time, and everybody was boxing. Everybody did the same thing so it was just like something we all did.

“As an uncle – I don’t look at his as just an uncle. He’s my coach. In the gym we’re family but we’re not family. He’s the boss … It’s family that helps each other but it’s all BS aside – it’s business.”

Towards the end he talks about the connection to hunting alligators:

Be sure to check out our full profile of Jay Paul and his dad RJ (who is a four-time arm wrestling national champion by the way!) to see a video clip of Jay Paul in an actual cage match and to find out a little more about the family’s Native American roots as members of the Houma Nation.