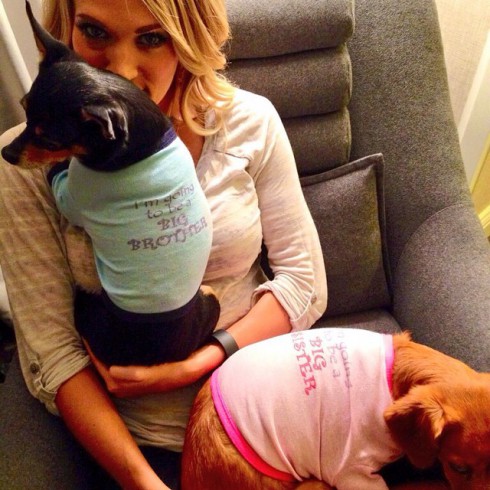 Carrie Underwood is huge animal lover, so it’s no surprise she enlisted the help of her two furry babies, Ace and Penny, when making a BIG announcement. Earlier today, Carrie posted the above picture indicating that she and hubby, Mike Fisher, are expecting their first child together! Ace and Penny wore adorned shirts that said, respectively, “I’m going to be a big brother” and “I’m going to be a big sister.”

“In honor of “Labor” Day, Ace & Penny would like to make an announcement. Their parents couldn’t be happier…” Carrie said via Instagram.

Mike went on to add a bit of humor with his reveal:

We haven’t picked names yet but it’s looking like Fly is gonna fly. #boyorgirl #flyfisher

It’s unsure how far along Carrie is in her pregnancy, although it’s often advised for first time mommies to wait until at least 12 weeks before sharing the big news.

Carrie snapped this pic of her having a blast on the beach just yesterday and, although she is wearing a loose-fitting shirt, there’s no sign of a baby bump just yet. 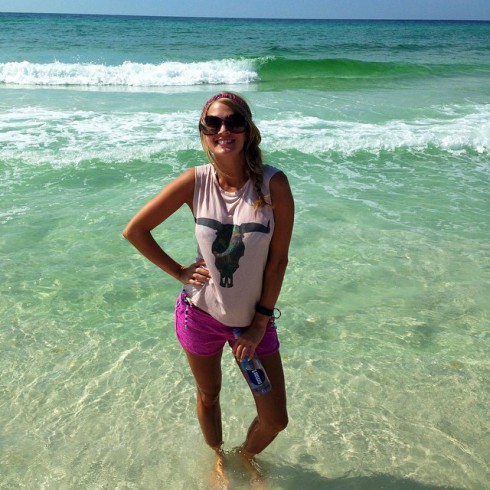 It looks like Carrie’s hopes for parenthood have panned out exactly like she planned. According to Life and Style, friends of the couple reported their plan was to get pregnant this year.

Between Carrie’s amazing vocals and Mike’s superior athleticism, there’s no doubt this little bambino or bambina is destined for success!

Zach Galifianakis’ wife Quinn Lundberg is pregnant and has gone into labor!

Perez Hilton welcomes baby No. 2 — find out her name!