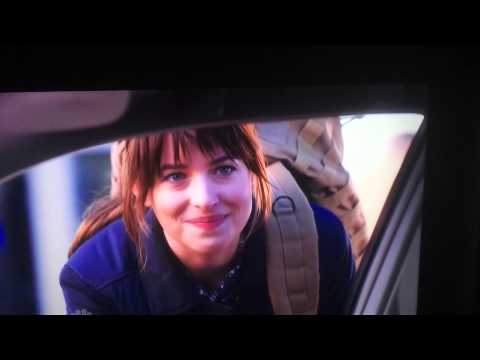 Fifty Shades of Grey actress Dakota Johnson hosted Saturday Night Live on Feb. 28, and one sketch in particular set Twitter on fire with its controversial theme. I’m talking, of course, about the SNL ISIS sketch, and you can find video of it here below.

The SNL ISIS sketch first appears to cast the Fifty Shades star as the stereotypical daughter-headed-off-to-college in her stage dad’s car, which has just pulled up at what looks like the airport. The inferred premise: a worried father sending his baby girl off to live in a strange, faraway place; a daughter trying to reassure him while brimming with youthful ambition and eagerness to leave the nest.

And then, plot twist! Cue the truck full of smarmy terrorists swathed in black, with their military-grade weapons firing into the air under a mock-up of the real Islamic State flag, as Dakota Johnson speeds off with them.

“Take care of her,” the dad says wistfully just before the truck takes off. “Death to America,” the lead terrorist replies calmly before issuing a war cry and firing off a few rounds. Before the scenario – which was revealed to be a recruitment video – even wrapped, (with its tagline of “We’ll take it from here, Dad,” no less) I knew I had just witnessed the birth of a bonafide Internet sh-tstorm. So, naturally, I hopped on Twitter.

Sure enough, there were already tons of tweets related to the SNL ISIS sketch, and not many were positive. User @JHawkintheSouth didn’t hold back, and summed up how a lot of people felt about the sketch writers’ attempt at humor. “I’m still pissed after watching this. ISIS is no laughing matter. Ever. Shame on SNL, NBC and Lorne Michaels!”

In the interest of balance, I should mention not everyone hated it. This Twitter user thought it was funny, for example.

There were other SNL ISIS references during the Feb. 28 episode that some might say were at best, just not that funny, and at worst, in really poor taste (“Iggy Al-Zalea,” anyone?), but none were as controversial as the skit in the video seen here. What do you think? Does the SNL ISIS skit go too far?