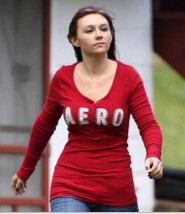 Here’s what we know. Teen Mom 2’s Leah Messer filed for divorce from Corey Simms about a week ago after 6 months of marriage, and was later filmed by MTV crying over Facebook messages.

The messages were from someone named Jordan, and said things like “You are very attractive.”

US Weekly has sources who say Leah is afraid that Corey cheated on her with a young woman named Jordan Humble, who met Corey on Facebook, and later met up with him at Wal-Mart.

She didn’t stop there. When the rumors started swirling, Jordan arranged a rumored-to-be staged paparazzi stroll. Click here to see bigger and more pics of Corey Simms’ rumored paramour at The Superficial.

Did Corey really cheat with Jordan? If he didn’t physically cheat, is flirting on Facebook enough to destroy a marriage?

Catelynn Lowell opens up about lying problem on Couples Therapy