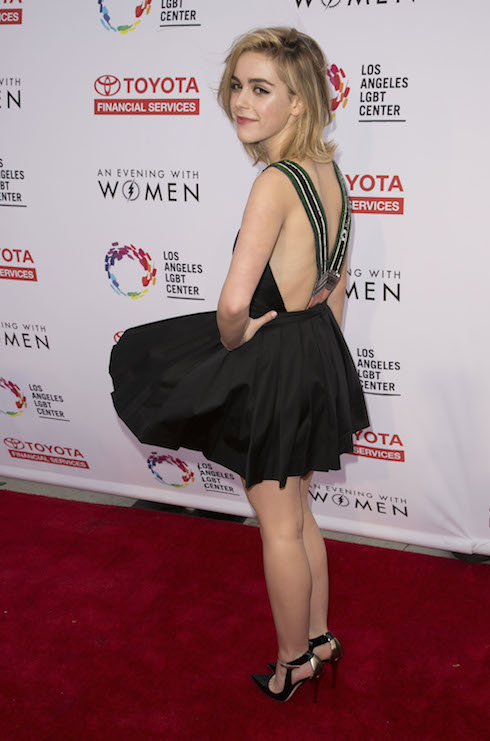 It’s entirely possible that no Mad Men character grew more over the show’s seven seasons than Sally Draper. And it’s just as possible that no actor on the show changed more than Kiernan Shipka. Though she’s only fifteen years old (and won’t even turn sixteen until this November), Shipka radiates the grace and charm of a seasoned professional. She’s got a big presence, and big plans post-Mad Men.

For starters, Shipka has two movies coming out in the next few months. The first, February, is a horror movie about a family living in isolation through a brutal Canadian winter. While a distinct departure from the Mad Men vibe, Shipka herself says it’s a “a really cool art piece” and “a very interesting film.” Given her recent assertion that she’s only interested in uncomfortable and challenging projects, there’s no reason to disbelieve her. The other is a bit easier to stomach. Fan Girl, which recently screened at the first-annual Bentonville Film Festival, stars Meg Ryan and Shipka as a social-media and selfie-obsessed mother-daughter combo who blur the line between fan and stalker where their favorite celebrities are concerned. Of her role as Telulah Farrow, Shipka says:

I thought she had a pretty clear perspective that this whole social media thing is crazy, but she’s also partaking in it. And also, she’s a filmmaker and she’s a very passionate person. She gets real obsessed with things and I thought that was a really fun element….She cares, which I really like.

In addition, Shipka’s newest film, the otherworldly thriller One and Two, was just picked up for distribution by IFC. According to the press release, “The story centers on a mysterious farmhouse where a family of four maintains an isolated existence with two children cursed with supernatural powers.”

The Beginning of an Era.

As for the mythical Sally Through The Decades spinoff that Jon Hamm jokingly proposed during a screening in the weeks leading up to the finale, Shipka’s flattered, but doesn’t foresee the idea becoming a reality. “I’m good with it,” she says, “I’m not saying no….[But Hamm] basically wrote the whole series when he said Sally would turn into Joan Jett, ride a motorcycle and kill a guy.” It helps that, while the show’s final episode aired two weeks ago, production on Mad Men actually wrapped last July, which meant that there was no time for Shipka–or any of its other stars–to dwell.

The last season of Mad Men starts 1 week from today.

What might be the most interesting thing about Shipka is how grounded and realistic she is. There’s not a trace of adolescent angst or uncertainty in her response to questions about what projects she plans on pursuing, or whether she has advice for young people just starting out in show business. Consider the response she recently gave to the latter question:

It’s a very hard industry. There’s a lot of rejection. You kind of have to have a thick skin. As far as real encouragement, it’s really important to learn…to constantly be learning. That can be at school, that can be enriching afterschool activities. One of the most important things is to read, and really look at things, and listen to people, and if you’re interested in filmmaking, watch lots of movies. Pay attention to the performances and the directing, and really just constantly absorb everything because that’s really what’s going to get you inspired.

In the same vein of professionalism, Shipka gives all the credit for her success to the cast and crew of her biggest hit to date. “Mad Men was a truly incredible experience,” she says. “To grow up on the show was so great and everyone was so nice. Everyone treats each other very well there. There’s just really great people to work with.”

Betty Draper gets some tragic news

SPOILERS What happened on the Mad Men finale?