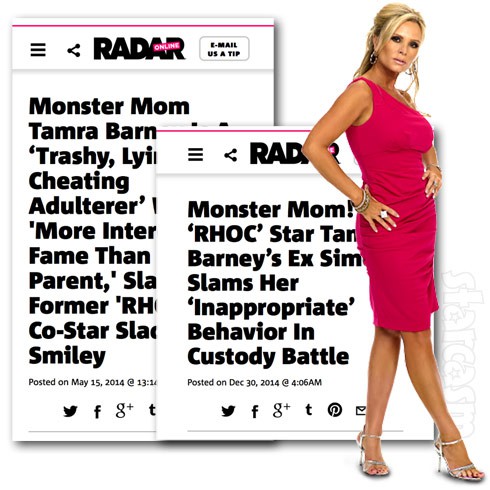 On Friday it was revealed that The Real Housewives of Orange County star Tamra Judge’s lengthy custody battle over her and ex Simon Barney’s 16-year-old daughter Sidney had finally been resolved with Simon gaining full custody. In the court documents it stated that “Simon Barney shall have sole physical custody of Sidney Nicole Barney,” adding that “Tamra Barney Judge shall have visitation with Sidney Nicole Barney every other weekend, and one day midweek from 4:00 to 7:00 pm every week, and any other additional times at Sidney’s discretion.”

As you might imagine, the information caused a good amount of speculation and commentary online, and this weekend Tamra Judge has spoken out in an attempt to clarify what really happened that led to her and Simon deciding this was the best thing for Sidney.

“I Know In my heart that I should not give the a**holes writing the nasty lies about me and my family any attention,” Tamra wrote on Facebook on Saturday. “But after going through the hardest time of my life over the past year…I have to speak up! My family means everything to me and NO it is not perfect all the time. Sometimes you have to make the hardest decision in your life to make someone you love happy. You have to put it in God’s hands and believe in your heart that they will understand what you went through and the sacrifices you made for their happiness.”

Tamra spoke with All Things Real Housewives, and shared a link to the story with the preface, “Here is the real story…not the crap that’s being reported by the idiots out there.”

Tamra emphasises that the decision was made by herself and Simon outside of court. “We both want what’s best for our daughter, her happiness is what matters most,” she says. Tamra says that it was Sidney’s preference to live with Simon, adding that their daughter “is 16 and can chose where she wants to live.” Tamra says “the judge threw out the regular case” and iterates that this custody arrangement was not any sort of loss for her or victory for Simon in court. She points out that the custody arrangement for the rest of their children remains 50/50.

Rumor Fix also spoke with Tamra, and she admits to the site that the entire process and the negative media coverage has taken a huge emotional toll on her and her family. “I’m not going to lie, This whole transition has hurt me dearly,” she says. “As a mother my kids are my life. I have had to sit back and read so many false stories about my family. It takes a really strong person to pull out of this OK. I’m not sure I am OK yet.”

Tamra targets Radar Online specifically, stating that they try “so hard to try and ruin people’s lives with untrue accusations.” She says that after the site referred to her as a “monster mom” that “I would cry myself to sleep at night.”

Tamra does manage to keep it positive, however, and she tells both ATR and Rumor Fix that their family is in a good place now and they’re focused on moving forward.

Gretchen Rossi will never get breast implants, is a “sugar mama” instead of a “golddigger”