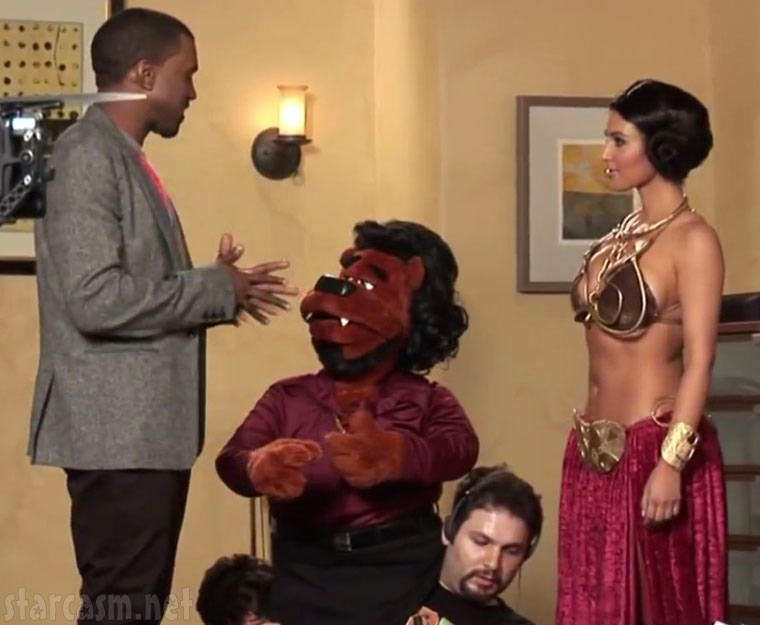 I don’t believe I have ever typed a more bloggerotic title than that. Talk about your pop culture fetish overloads! The only things missing are Spaghetti Cat, Betty White and that blue Volkswagen van from Lost.

Part of me thought I should just post these photos with no explanation at all, going on the theory that any explanation or context I could provide would just lesson the impact of this seemingly inconceivable convergence of hipness. (Yes, Kim pun intended!) But, I took an oath when I graduated from the My Parents’ Extra Room College of Internet Commentary (or MPERCIC as we alumni call it) and am bound to explain to you, the reader, what you’re looking at and why it exists. So…….

It all started with a concept for an animated comedy variety show created by Rhymefest. He approached Kanye West about the idea and Kanye, who has always been a big fan of the show Crank Yankers, suggested the show should feature puppets. Rhymefest approached Jimmy Kimmel and his production team at Jackhole Productions (including Adam Carolla and Daniel Kellison), the ones responsible for Crank Yankers, and they jumped on board.

Kanye and Rhymefest brainstormed some more on the project and eventually came up with the title Alligator Boots, which featured rapper Rhymefest’s alter puppet ego, Pork Troy. They went on to film a pilot episode for Comedy Central, which is where all the material in the clip is from. 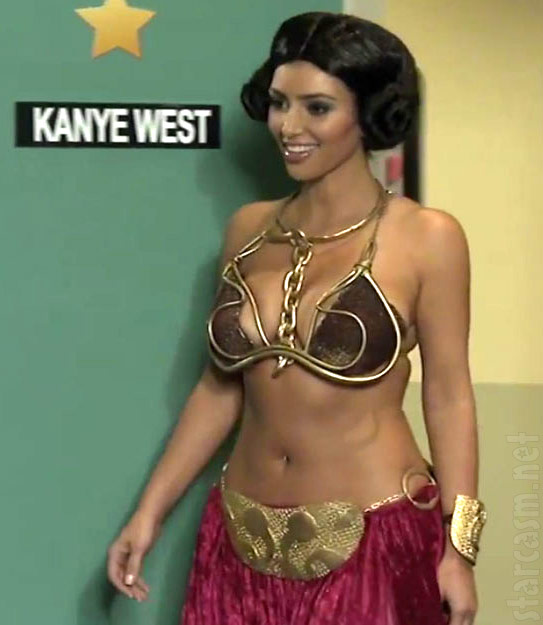 There is a fake live audience, comedy skits, fake commercials, funny videos, and lots of backstage drama – all done with a much more adult-oriented mindset open to sex scenes, raunchy language and even full-frontal muppet nudity! (Sorry – no screen cap of that, you’ll have to watch the clip) The show is emceed by Beary White, a baritone bear voiced by Jimmy Kimmel who is even more sex-obsessed than Chef from South Park. 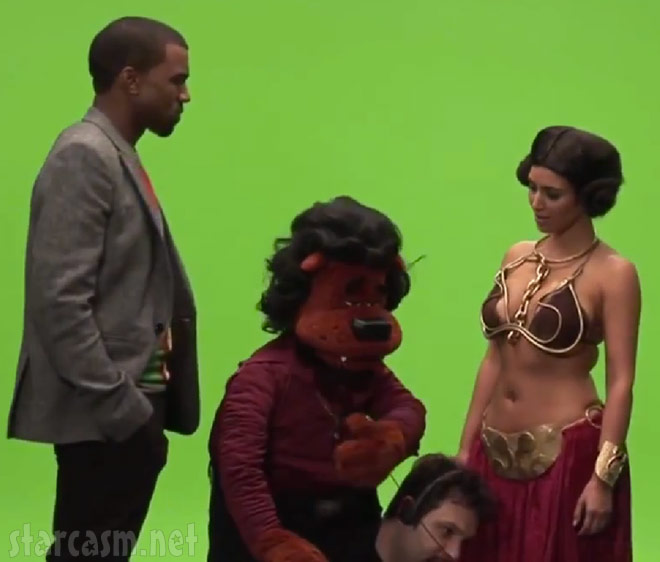 Kim Kardashian made a special appearance on the pilot, probably as a favor to her good friend Kanye West, and wore the iconic fan boy dream space-aged bikini costume worn by a Jabba the Hutt enslaved Princess Leia in Return of the Jedi. The whole Kim Kardashian as slave Leia concept was thought up by Kanye on the show, who tells Pork Troy, “And then I wanna have, like, Kim Kardashian play Princess Leia because, you know, Kim Kardashian’s as$ is just so, just perfect!”

Kanye West tends to talk in controversial hyperbole, but in this case (be they Republican or Democrat, fans of Beyonce or Taylor Swift) I think few would argue with his declaration. (I didn’t think Kim could ever top her Princess Jasmine Halloween costume, but I had completely forgotten the possibility she might play THE sexy costume trump card! Anyone else want to see Kim star in The Empire Strikes Backside?) 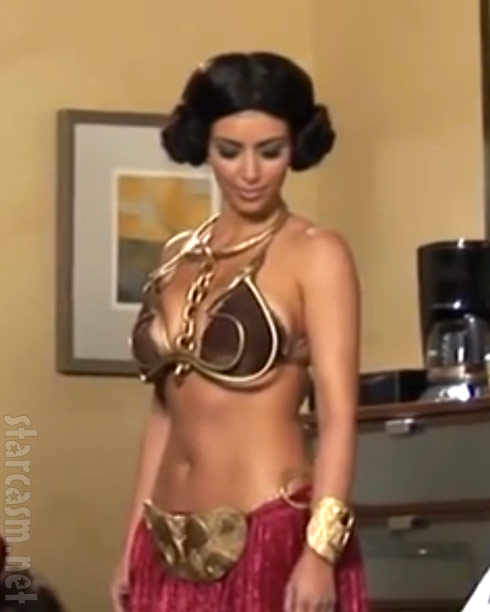 After Beary White pitches a barrage of awkwardly straight-forward woo at Kim throughout the show, she surprises Kanye at the end of the episode by revealing, “Remember that bear? The one who wanted to put his [bleep] in my [bleep]? Well, I’m gonna go let him.” Kim laughs about the scene backstage telling the camera, “It’s nothing new, I play with puppets all the time at home!”

As surreal as the ingredients are in this show, it does look like it had potential to be pretty funny. Jimmy Kimmel was the head writer (in addition to being the voice of Beary) and with Kanye behind it they wouldn’t have had any trouble bringing in marketable talent to host. But, sadly, it seems Alligator Boots never made it past the pilot episode. 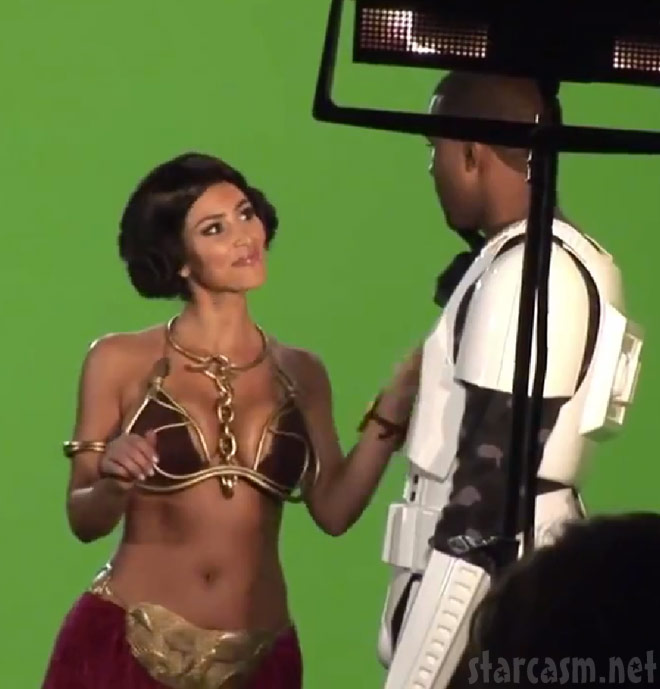 Kanye and the crew shouldn’t feel too bad, though, because after all, they did provide the world with some of the most fetishtacular images in the history of mankind, albeit only in screen capture quality. So, for that alone, I think the show was a HUGE success!

Here are some more photos of Kim Kardashian as slave Leia from the Alligator Boots behind-the-scenes clip – just click the thumbnails for larger images: 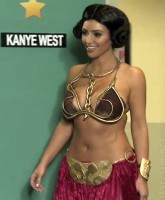 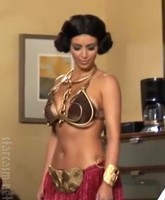 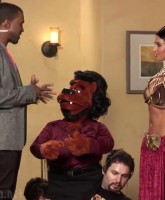 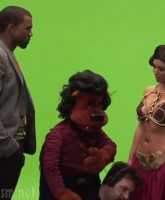 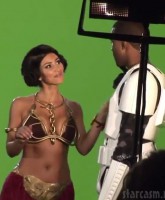 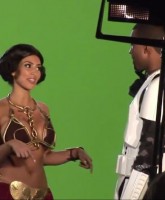 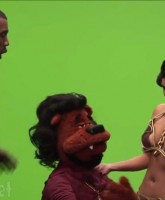 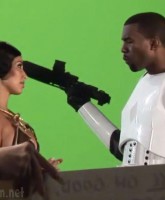 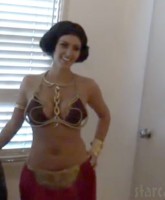