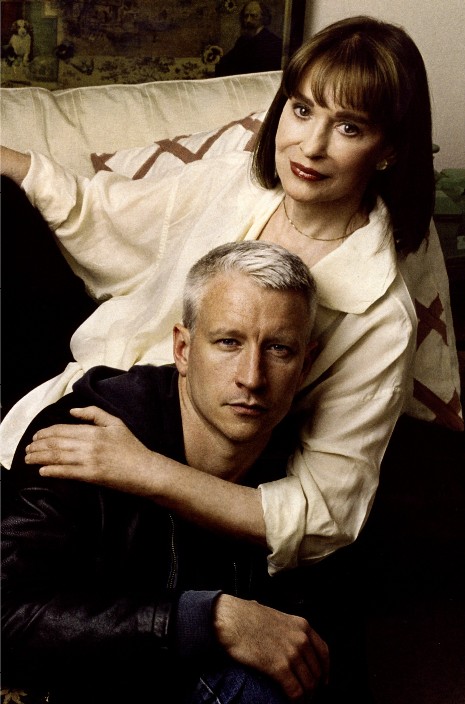 Anderson Cooper opens the second week of his new daytime talk show Anderson with a show devoted to his mom! Awww! But it’s a little more than cute or sappy, because his mom happens to be Gloria Vanderbilt.
The fact is that Gloria has been one busy girl in her 87 years, and she’s not done yet. She’s one of those people who have had a great deal of privilege, and had the good sense and creativity to put it all to good use.
Gloria was born in NYC to railroad heir father, Reginald Claypoole Vanderbilt. He died of cirrhosis when she was only 15 months old, and she inherited a five million dollar trust fund (this was in the twenties, and would be worth over $61 million now.) She had a half-sister, Cathleen Vanderbilt, from her father’s first marriage, who died at 40 in 1944.
Gloria was named after her mother, Gloria Morgan, who’s twin sister Thelma Morgan Fruness was the mistress of Edward, Prince of Wales from 1929 to 1934.) Thelma introduced Prince Edward to Wallis Simpson, who he later abdicated his throne to marry (thus making his brother George, who suffered from a painful stutter to take over the throne (see The King’s Speech.)
In 1934, Gloria’s aunt Gertrude Vanderbilt Whitney won custody of Gloria when it became known that her mom had a female lover. For a while Gloria refused to support her mother, but eventually did take care of her.
In 2009, Gloria had a different perspective on the tragedy that rocked her family when she was so young:
Of her mother:
“She really lost the case because she was accused of being a lesbian,” says Vanderbilt. “We’re talking about the ’30s…. It was considered not something that anyone who was a good person would be involved in. And so it was a terrible scandal.”
Gloria had her share of torrid love affairs, Gloria was a teenager, she had an affair with Howard Hughes. She also romanced ol’ blue eyes himself:
“Oh, Frank Sinatra was a great friend,” she says, “’cause he came along and ring-dinged his way into my heart… and he just – you know – was a lot of fun, very romantic. I never saw him ever involved in any – you know – violence or anything that actually friends warned me about, you know.”
She had a one-night stand with Marlon Brando, and her good friend Truman Capote set her up on a date with the married William Paley, CEO of CBS.
She later revealed that she used sex to deal with her low self-esteem and issues with being separated from her mother.
“I have… gravitated towards men who are elusive, who are unattainable, and I can get very obsessed and very hooked into them, such as I did with this married man that I was involved with for 15 years. He was this elusive, unattainable, you know, substitute for my old sweetheart…”
Gloria was married four times. She was married for four years to agent Pasquale (“Pat”) DiCicco, who she met in Hollywood. She had two sons (Leopold Stanislaus “Stan” Stokowski, and Christopher Stanislaus) with second husband Leopold Stokowski, who she married in 1945, and divorced in 1955. In , 1956 she married director Sidney Lumet, and they split in August, 1963.
She married writer Wyatt Cooper December 1964, and they had two sons Carter Vanderbilt Cooper (January 27, 1965) and Anderson Cooper (1967.) Carter died July 22, 1988, when he jumped from their 14th floor NYC apartment. Gloria believes Carter was suffering from a psychotic episode brought on by the allergy drug Proventil.
Gloria gained early attention as a painter, and mass attention when Indian designer Mohan Murjani produced Gloria’s own brand of designer jeans. They were more tight-fitting than other jeans on the market at the time, and accentuated the butt. They also had Gloria Vanderbilt’s name embossed on the back pocket. Gloria was really setting the stage for other famous socialites (and reality stars) in the modern era with this jean line, and expanded it to include blouses, perfume, shoes, and many other lines. She also wrote many books, and has continued to paint. (Click here to check out her art, and even buy some if you have the $$$.)

Paris Hilton, eat your heart out!

How much money does the royal family make? Where does it come from? What do they do?