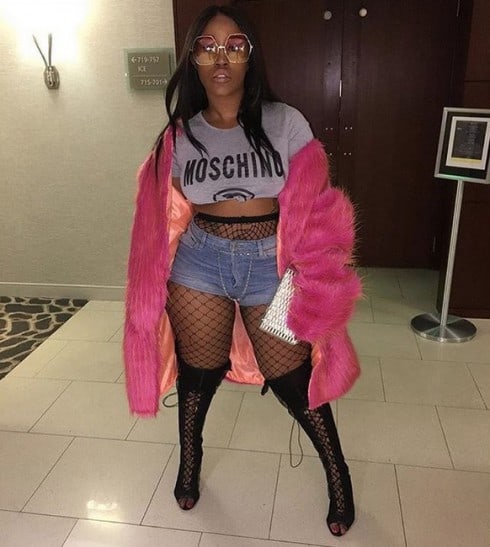 So it’s been kind of an interesting 24 hours in the greater Love & Hip Hop universe. First of all, LHHH’s Hazel-E continues to suffer fallout–including getting fired from the show–following her decision to say that “gays should burn in Hell like God said in the Bible.” Secondly, VH1 just released the supertrailer for LHHNY Season 8; it features Safaree jumping ship to join the New York crew, Remy Ma and Papoose baby mama drama, Rich Dollaz creeping with a married woman, a subplot involving a jilted lover and catfishing, and a whole lot more, and basically looks lit AF.

But both of those stories are being overshadowed by the LHHATL Jhonni Blaze drama, which breaks down like this. After flirting with Black Ink Crew Chicago and the since-canceled Love & Hip Hop Houston, former LHHNY star Jhonni Blaze was all set to join up in the ATL for Season 7. But a side-beef with Stevie J led to Jhonni airing out some of Stevie’s dirty laundry on social media and calling him out. Based on the receipts, it looks like Stevie made a threat involving guns (Jhonni used the term “gunplay” in the video below, and later says he “was sexually messing with Shauna Brooks”) and Jhonni went and put him in his place:

So you said what Stevie ?

Stevie you know my father Greg ? Oh ok play if you want saying you going to pull up on me

@hitmansteviej_1 what's up you forgot who my father is ?!!

Following that, Jhonni was apparently fired from the LHHATL cast. Which created something a problem for the show, since Jhonni had been involved with preparations for LHHATL Season 7, and seemingly knew everyone’s storylines–though the show had yet to film a single scene. (Filming is scheduled to begin this week.) So Jhonni did what reality stars do when faced with an apparently all-or-nothing situation: she went on social media and spilled the tea on the entire plotline for Love & Hip Hop Atlanta Season 7, including Stevie’s rumored fling with a trans woman and Kirk Frost’s alleged second fake baby mama.

(Completely unrelated to the LHHATL Jhonni Blaze video claims is the hilarious moment at 3:37 when Jhonni apologizes to her Uber driver for using such foul language. If you didn’t watch the video to that point, do yourself a favor and click ahead.)

Y’all out there payin’ that little girl to say that that’s Kirk’s f*ckin baby; Shauna Brooks is gonna air out Stevie J, because he’s f*cking her; Brittany is on there to piss off Joseline because she took pictures with Rick Ross, and Stevie’s f*ckin mad, so he picked up Brittany; she ain’t gonna go nowhere. My homeboy Bocce, congratulations for being on the show. My homegirl Tokyo, congratulations for being on the show. Now let’s see what storylines y’all can do now! F*ck VH1!

Then, a couple of IG updates later, Jhonni actually backtracks on the alleged setup, saying that she’s “not on Love & Hip Hop Atlanta” and is not involved with the franchise. “Shout-out to VH1,” she adds, “shout-out to Mona [Scott-Young, LHH creator and executive producer], shoutout to that whole crew but I am not on that show. This has nothin’ to do with the show. This has nothing to do with it.”

“It’s just,” she says, “people love trying me. And I get tired of people trying me.”

So, it looks like either Jhonni *was* involved with the show, was set to join the cast, and then backed off to make it look like she quit before she could get fired; or she was actually never involved with the show, and simply decided to blow up Stevie J after months or years “keeping quiet” about his mendacious ways. We’ll find out soon enough–Jhonni’s first IG update after the video went viral was a claim that she’ll be back to work soon, on one show or another:

I rather film on the tv shows I'm on and sing and not have drama every day then fight ! One thing about me I don't lie ! I have a right to react ! Back to filming tomorrow ??? I'm about to show you all what my team is bout ! We win ! @bombchellemusick @debra4mizay @opulentk_ @pinkblushhair I love y'all ' let me focus !

Other things we know: Lil Scrappy and Bambi married in secret a month ago, though it’s unclear whether they’re going to be on the show next year; Karen King won her identity theft trial on a technicality, but prosecutors intend to refile; Kirk Frost and Rasheeda are split up at least temporarily, but Rasheeda says the two of them are “co-parenting very well”; and Kirk allegedly settled his baby mama drama with Jasmine Washington out of court, though there’s rumored to be a second baby mama ready to come forward.

Kylie Jenner and Drake might not be dating yet, but give it time