Is there a Khloe Kardashian sex tape? The long-rumored document’s existence was confirmed by Khloe herself on Sunday night, when she admitted that she and estranged husband used to get down for their own video cameras on the regular. Khloe says the tapes are locked away in her private safe…but fans wonder about the security of that safe, particularly as interest in Khloe’s new show, Kocktails With Khloe, appears to be at an all-time low for the greater Kardashian franchise.

KWK‘s producers have allegedly been “freaking out” about the perceived level of interest in Khloe’s new show for weeks–and are said to be worried about a general sense of Kardashian burnout among the viewing public. Said an insider who claims to be a key part of the show’s production, “[Producers] are really concerned with how little hype the show is getting and are really concerned with the fact that the show’s trailer has gotten fewer than 10,000 hits on YouTube.”

So, according to the same source, the producers “have asked Khloe to step up her game in terms of promotion.” And Khloe has certainly been engaged with that: the last few weeks have been a publicity whirlwind for Khloe, who’s dished on a bevy of unknown and sometimes sordid Lamar Odom updates at each stop. Her recent tale of sexual woe with Lamar brought a sharp rebuke from the former NBA star, who blames Khloe’s gossipy ways for a recent setback in his own recovery. Khloe’s talked about what she perceives to be a Lamar Odom sex addiction, and also told television journalists and fans that she “definitely” plans to use Odom’s story in some capacity on her new show, if not Odom himself. 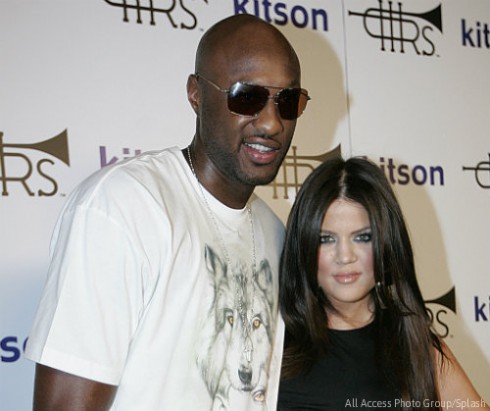 Khloe’s Sunday appearance on Bravo’s Watch What Happens Live brought the latest salacious news: namely, that there is a Khloe Kardashian sex tape locked up in Calabasas, waiting for the right safepicker to come along. Khloe first reported a follow-up regarding the Lamar Odom sex addiction, claiming that a situation like the one Lamar faced at the Bunny Ranch was perhaps bound to happen: “I didn’t know that particular situation was going to happen,” Khloe explained, “but I always feared the end result; that was the reason why I left the marriage. I had never imagined it would be at a brothel, I just knew I had to get to his side. His demons are overshadowing what a great heart he has, he could not be there alone, and I had to be that person.”

In response to the related question “Have you ever made…a sex tape of your own?”, Khloe batted her eyelashes before answering:

I mean, not like a….I’ve definitely recorded myself having sex with my ex-husband. But, not, like, talking to camera…it was just more like….Do you remember those little–those little cameras–oh, what were those things called!–they were little video cameras you’d put in your pocket? That was my jam for a moment.

When asked if she still had possession of her own sex tape, Khloe responded, “I do, in my safe.”

It’s perhaps worth noting that the 31-year-old Keeping Up With The Kardashians star referred to Khloe Kardashian sex tapes in the plural. Skeptics have pointed out the possibility of a release whenever Kocktails With Khloe‘s ratings plummet.

Lamar Odom has yet to give an official statement.

Lamar Odom is ‘partying endlessly,’ unless he’s settling down with his family