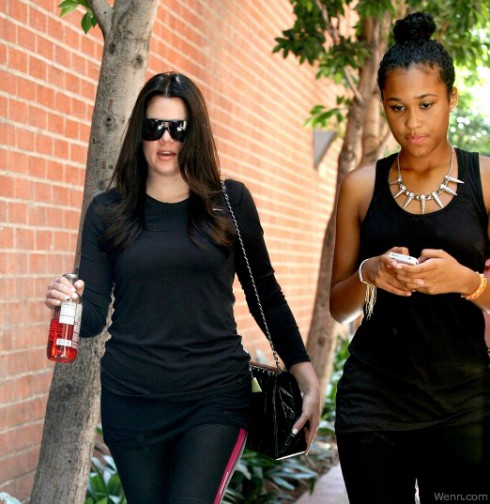 Destiny Odom’s family is in the reality TV business, which thrives on sharing personal confessions. But, in late January, the teenager broadcast some thoughts on Twitter that were particularly concerning.

“I feel as If I am drowning in my own emotions, and I have no home to save me,” wrote 14-year-old Destiny on Jan. 27 from her Twitter account, which has since been deleted. When a follower then asked if she cuts and how often, Destiny responded, “Tonight and I don’t count.”

The words sure seem like cries for help. Many people responded with support — including Destiny’s stepmom, Khloe Kardashian-Odom. According to Star Magazine, Khloe made a real effort to connect with stepchildren since her whrilwind marriage to NBA star Lamar Odom in 2009. Following this latest news, sources say Khloe is trying even harder to devote time to Destiny and her younger brother, Lamar Jr.

Realty TV gigs aren’t just limited to Destiny’s dad’s side of the family. Her mom, Liza Morales, appears in Starter Wives Confidential, which premiered last month on TLC. Star reports that Destiny has felt even more isolated in recent months as her mom has been busy filming the new show. Destiny also didn’t get to see her father very much while she was growing up because of his hectic basketball schedule.

According to the Mayo Clinic, people who grew up in unstable family environments are more likely to self-injure. Females are especially prone to self-mutiliation. Cutting generally isn’t a suicide attempt, but it is a red flag that should be addressed before leading to greater problems.

“My children have always and will always be my top priority in life,” Liza said following reports of her daughter’s depression. “With the added pressures of Hollywood and the instant attention of social media, it’s not always easy for a teenager to express their emotions in the best way.”

Hopefully Destiny can get the support she needs, both from her family and from professionals who can help her deal with self-injury. Stay strong!

Amanda Bynes swears she’s not crazy, only has “hot” friends, doesn’t care what ugly people say about her