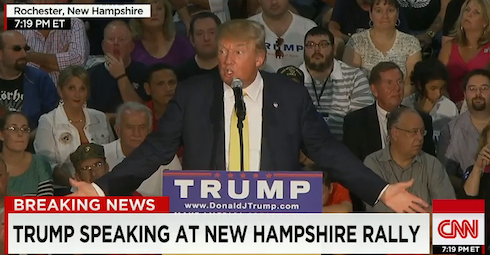 The latest Donald Trump controversy of Campaign 2016 emerged on Friday, the morning after Trump failed to correct a man who called President Obama a Muslim and who said Obama “isn’t even American.” Fellow candidates from both parties were swift to condemn Trump’s remark; Trump himself has not commented on the flap.

The Donald Trump controversy unfolded during a campaign event in New Hampshire. Trump had just finished speaking and turned to the crowd to take questions; the very first questioner presented Trump with the controversial comments. Here’s footage of the exchange:

“We have a problem in this country,” the unidentified man begins. “It’s called Muslims. We know our current President is one.”

“You know he’s not even an American,” says the birther. “Birth certificate, man.”

At this point, Trump laughs: “We need this question. This is the first question.”

The crowd laughs in turn, and the man continues: “But anyway, we have training camps, growing, where they want to kill us.”

“That’s my question,” concludes the man. “When can we get rid of ’em?”

As many outlets have pointed out, the exchange contrasted sharply with a similar occurrence at a John McCain event in 2008. During that rally, McCain told a woman who said she was afraid of Obama because “he’s an Arab” that Obama is not someone to be afraid of, and is a “decent, family man…that I just happen to have disagreements with”:

Condemnation of Trump’s inaction came swiftly, from both left and right:

In addition, Senator Lindsey Graham, also a candidate for President, offered a rebuke over the latest Donald Trump controversy: “Oh come on, give me a break. You had a chance here to show who you were. This happens to all of us. It happened to John McCain. You have to push back. We are trying to be the leader of a nation here.”

Ohio governor John Kasich’s spokesman said, in response to the Donald Trump controversy, “I think it’s safe to assume the President is both American and a Christian.”

Trump himself has not commented on the events. His latest tweet is a re-statement of his belief that he won Wednesday night’s CNN debate.