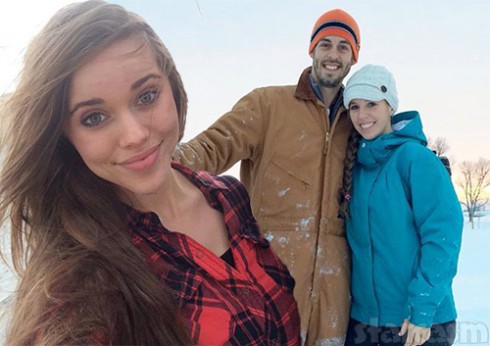 Two weeks ago, 19 Kids and Counting‘s Derick Dillard set off a firestorm when he posted a video to Instagram that showed him appearing to hit an unsuspecting cat while sledding with his in-laws. Even though Derick yelled “move cat” before starting the run, many viewers were troubled that he still went toward it and that his family laughed about the near miss.

Sledding with friends and family at the Duggar home 🙂 #smallestsled

Despite loud criticism, the ill-advised video is still on Derick’s page without any explanation from the Duggar family — until now. During an interview with Memphis radio hosts Michelle Lewis and Ron Olson on Wednesday, Jessa Seewald was put on the spot about her brother-in-law’s actions.

“I know you can’t speak on behalf of your sister, but I do want to give you the chance to clear the air,” host Michelle said. “Everyone is getting all on your sister and her husband about ‘Cat Gate.’ I’m sure you’ve heard it. Are people blowing it out of proportion? Was he really trying to hit a cat?”

“No, he wasn’t. Our hill is very uneven and so he started to sled and the cat just happened to be there. It actually jumped out of the way,” said Jessa, who admitted she’s the most outspoken of her siblings. “He didn’t hit the cat, it didn’t get run over.” (The line of questioning begins around the 5:40 mark.)

Jessa added she saw rumors where the cat had to go to the vet and died of internal bleeding, but she said that absolutely isn’t true.

“I know the cat,” she continued. “I live not far away and we see the cat all the time and it’s fine.”

Despite Jessa’s assurances, some are still calling for Derick to personally apologize.

“The Duggars will NEVER admit being wrong about anything,” one commented on the original Instagram video after listening to Jessa’s interview. “No one cares what Jessa has to say about the situation, what I want is for Derick to admit he had a lapse in judgment and apologize for it.”

Do you think Derick should apologize or should everyone else just move on?