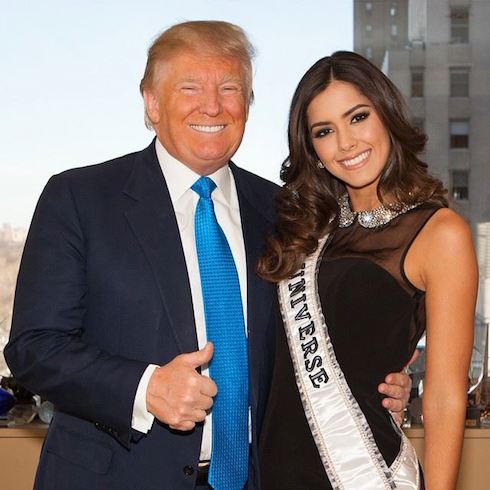 Donald Trump insults Jeb Bush’s wife with a tweet the beleaguered real estate mogul has since deleted. The tweet had to do with Trump’s controversial comments on Mexican immigrants; Bush’s wife Columba hails from Mexico, and has frequently critized the GOP for its stance on immigration.

Trump tweeted out the insult on the evening of July 4th. It was actually a re-tweet, from “Dutch right-winger” @RobHeilbron: 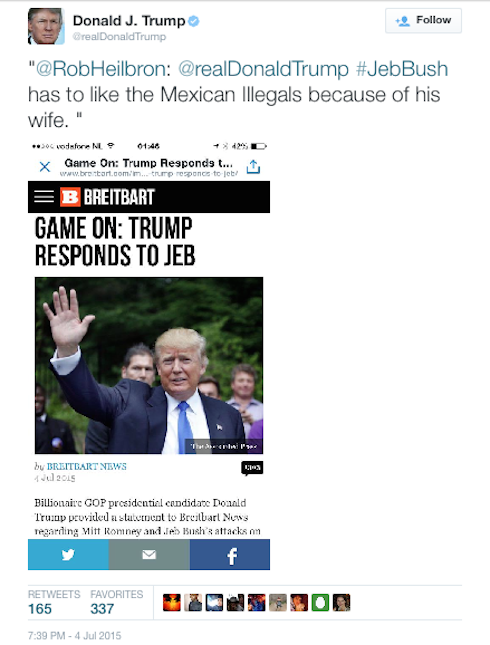 Though the original retweet has been deleted, you can still view it on Trump’s Twitter page via Google Cache.

All the Bush campaign offered in response was a simple statement from Columba: “I don’t think [Trump] represents the Republican Party and his views are way out of the mainstream of what most Republicans think.”

Trump has been doubling down on his original comments regarding Mexico and illegal immigration, which he made during his June 16th presidential campaign kickoff. Those comments were as follows:

Since that announcement, the Trump brand has lost many major sponsors and partnerships, including Univision, which will no longer carry the Miss USA pageant; NBC, which canceled The Apprentice; and Macy’s, which said it will stop carrying Trump-brand menswear.

NASCAR has also severed its ties with Mr. Trump.

Thx to all the people who called to say they are cutting their @Macys credit card as a protest against illegal immigrants pouring into US — Donald J. Trump (@realDonaldTrump) July 6, 2015

Apparently there are five banned wagers on Jeopardy, and one of them is truly sad