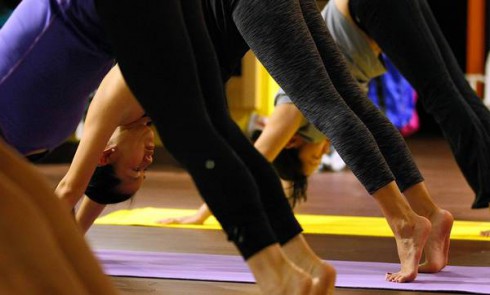 Upon hearing the popular Lululemon Luon pants were accidentally manufactured with a potentially transparent material, the first reaction of many yogis around the country was to freak out about who they may have bared their butts to. Now, adding insult to injury, some Lululemon sales associates have reportedly asked customers attempting to return the pants to bend over and “verify sheerness.”

One customer in Canada revealed her experience with store “educators” and the Guest Education Center (or glorified customer service center) on Lululemon’s Facebook page.

I was asked to BEND OVER in order to determine sheerness. The sales associate then perused my butt in the dim lighting of the change room and deemed them “not sheer”. I felt degraded that this is how the recall is being handled. I called the GEC to confirm this is their protocol, and they verified that yes, the “educators” will verify sheerness by asking the customer to bend over.

Amidst disgusted customer responses, a Lululemon representative wrote on March 19 the company would follow-up on the claim. Now it seems that the company’s official stance is that, yes, they do reserve the right to check out your booty.

“The truth of the matter is the only way you can actually test for the issue is to put the pants on and bend over,” said Lululemon CEO Christine Day during a conference call with Wall Street analysts, Bloomberg reports. “Just putting the pants on themselves doesn’t solve the problem. It passed all of the basic metric tests and the hand-feel is relatively the same, so it was very difficult for the factories to isolate the issue, and it wasn’t until we got in the store and started putting it on people that we could actually see the issue.”

For obvious reasons, this seems like an invasion of privacy. It also seems to be an increasingly mismanaged issue for the retailer’s public relations people.

From the Lululemon perspective, the 17 percent of pants that are reportedly affected could add up to $20 million in lost merchandise if everything is returned. If the “educators” can help the company sidestep some of those returns, then they’ll help minimize damage.

But, if Lululemon becomes known for invasive, sketchy policies, then the problem will likely cost more than $20 million in the long run.