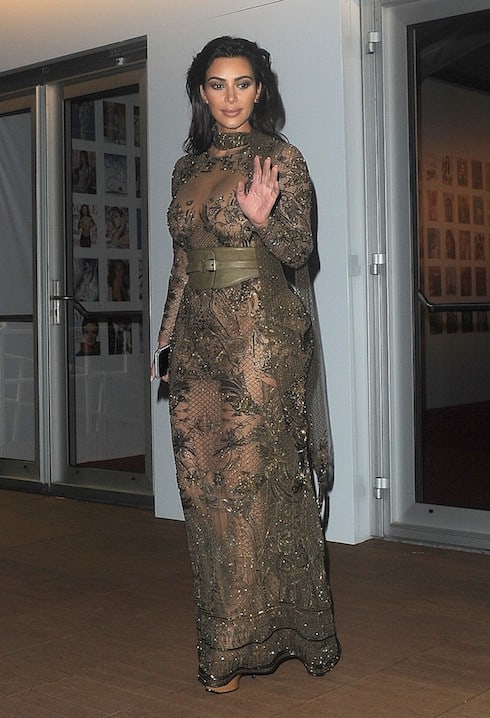 The Paris robbery that saw reality TV star Kim Kardashian held at gunpoint took place over a week ago, and speculation about whether or not it might potentially have been faked continues to grow. The initial speculation was sparked by a since-deleted Huffington Post article that claimed Kim arranged the robbery for the benefit of Keeping Up With The Kardashians‘ cameras, before breaking down and confessing her deception. (You can read the HuffPo article in our report here.) Because falsely reporting a crime is itself a crime, the logic went, E! found itself forced to halt production on one of its most popular shows just as filming for the thirteenth season had begun. The network has indeed confirmed that KUWTK production is on indefinite hiatus, but stated that it chose to stop the works out of an abundance of caution for Kim and her family’s safety.

Now, a new report, with brand-new gossip to spread about the possibility, alleges possibly incriminating footage of Kim in her Paris hotel room with the men said to be responsible for the robbery. The footage first surfaced in conjunction with MediaTakeOut’s article from earlier this week, which straight-up accused Kim of staging the robbery. After her lawyers filed a $10 million defamation lawsuit against the site, their article disappeared–but the video below popped up, and, per Californian attorney Adam Michael Sacks, it could, maybe, potentially, be “significant,” possibly.

Of the video, Sacks said, “You can see there are no marks on Kim’s face or wrists. If she was gagged and bound, she would have bruising. She also appears very calm. The door is undamaged, and the apartment seems to be in order.” And the report, independent of Sacks’ analysis, asked two rhetorical questions: “Why does Kim seem so calm just moments after she was allegedly tied up and tossed into a bathtub? And why does the luxury home appear undisturbed?”

According to Kim’s reps, the answer is simple: the video was filmed “up to five hours after she was held at gunpoint.”

Here’s the hot potato video in question, which could be footage of a midnight garden party, for all we know:

While Kim has yet to return to social media or make any public appearances since the robbery, Kardashian home network E! did just share an article on her current well-being. “Kim is doing better,” said their source, “but she still has a long way to recover from the robbery. She has been receiving some professional counseling. Her friends and family have been really supportive. Her sisters and mom have been checking on her every day….[She] is very paranoid still when she is alone. She has been having flashbacks and hasn’t been sleeping well.”

Keeping Up With The Kardashians returns with the back half of its twelfth season October 23rd on E!.

Now Rob Kardashian and Tommie from LHHATL are maybe dating