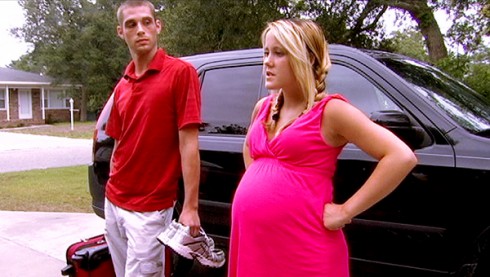 And the Jenelle Evans saga continues . . .

The Teen Mom’s estranged baby daddy Andrew Lewis, who recently told Jenelle that he was modeling in China, spoke to In Touch magazine (via Holly Baby), confirming what Jenelle already admitted to on her formspring account: that she smoked marijuana while pregnant with Jace.

There is a raging debate about whether or not it’s safe to have a toke or two during pregnancy to treat morning sickness, but, according to Andrew, Jenelle’s marijuana use while pregnant went much farther than that. She reportedly got so high that she could barely walk. He also says he found speed in her pocket during her pregnancy, which doesn’t prove that she actually took it . . . but often when there’s smoke . . .

Despite the rumors (which Jenelle admitted to) that Andrew may not be Jace’s father, he still considers himself the baby’s dad, and has even had several secret visits with the child arranged through Jace’s daycare.

He also said that he signed over his custody of Jace to Jenelle’s mother Barbara because he believes that “Barbara wouldn’t let Jenelle hurt him.”

Farrah Abraham says she is not fired from Teen Mom, says ‘fake firing’ was a ‘hate crime’