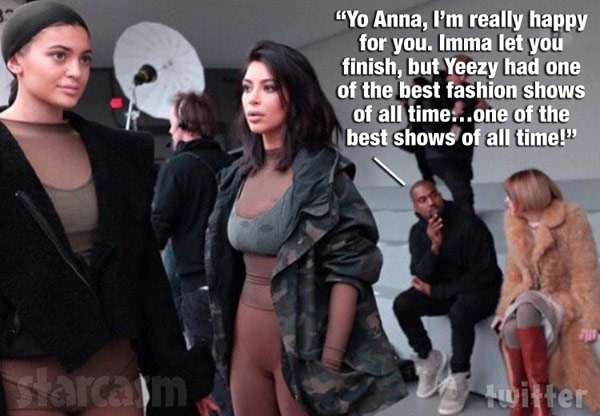 We might as well go ahead and officially change the name of this month from February to Kanye Westuary (or maybe Yeezuary? Or just Kanyuary?) because the media lightning rod has followed up his headline-grabbing Beck diss at the Grammys with his highly-anticipated fashion show at NYFW showing off his collaborative Yeezy Boost collection with adidas Originals, during which he played the first track off of his brand new album!

“If you’re mama knew how you turned out, you’re too wild,” Kanye repeats. “I need you know… you’re much too good to be true.”

He later sings (well, talks with autotune), “Don’t fly so high your wings might melt, you’re much too good to be true. I’m just bad for you.”

As far as the fashion show itself, it featured a wide array of diverse models sporting a whole lotta nude illusion! From Refinery 29:

In terms of the collection itself, things weren’t as revolutionary — or “pavement-cracking” — as promised. It was a lineup of oversized jackets, sweatshirts, sweaters, and leggings, interspersed with Vanessa Beecroft-esque nude-colored underwear. A camo parka that Kim Kardashian also wore was a highlight, and we thought the oversized backpack was a clever accessory that’ll probably make it into a healthy stack of editorials.

The “pavement cracking” reference was referring to a recording of Kanye that played for those in attendance, which included such notables as Kim Kardashian (of course), Anna Wintour, Beyoncé, Jay Z, Rihanna and Justin Bieber. Here’s a transcription from The Cut:

I see all these people commenting, “Why’s he still trying?” I mean, if I see something, I see an opportunity, I’m gonna go for it. I’m here to crack the pavement and make new grounds, sonically, and society, culturally. We’re not always in the position we want to be at, where we’re constantly growing, constantly making mistakes, we’re constantly trying to express ourselves and trying to actualize our dreams. I want to create something better for you. We have been limited. It’s bigger than who I am even in this — my presence, living. It’s about, you know, when I was on earth, what did I do to help? I want people to think more, I want people to feel like it’s okay to create and follow what their dreams are and not feel boxed in. I want people to feel like awesome is possible. There’s a lack of creativity in every field, because people are afraid. As an artist, and in this world, we can do whatever we want.

And here are tons of photos from the Kanye West and adidas Originals Yeezy Boost fashion show courtesy of social media, beginning with the already-gone-viral picture of Kanye’s daughter North West crying:

My look for the Yeezy show!!!!!! Yeezy head to toe!!!!! pic.twitter.com/BbYsUZwdiu

So proud of you Yeezy!!!! #YeezySeason

when you know your look is on point #NYFW : @colindouglasgray

even Anna couldn't get front row at yeezy pic.twitter.com/t3C709fKtW

I don't know where to look either pic.twitter.com/IdSE1M0nJ9

Justin Bieber is one of the real MVPs just showed up at kanye's fashion show #YEEZYBOOST #YeezySeason #adidas pic.twitter.com/JHb2YsuQ3K

VIDEO – Cee-Lo and Kermit sing “Bein’ Green” on The Voice!