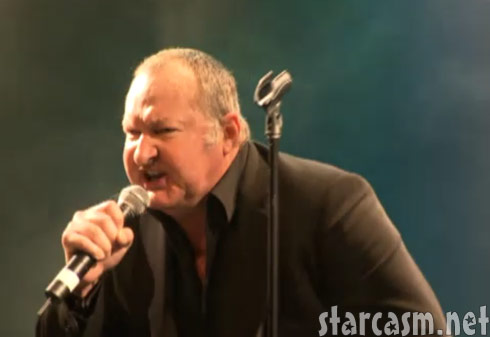 In all of this Sheen #winning and Mel Gibson ranting we’ve almost forgotten about the absolute most whacked out celebrity going right now and that’s Mr. Randy Quaid.  I should include his partner-in-weird and wife Evi too while I’m at it.

The couple is currently seeking asylum in Canada due to having been squatters in an abandoned house and stiffing a hotel out of a bunch of money.  Well that’s what logic would tell you but the Quaids argue that star whackers, a group of unidentified persons that are systematically murdering celebrities, are what they’re hiding from and not law enforcement! You can read all about this conspiracy theory from our previous post based on a Good Morning America interview here.

Sometimes just going on ABC and informing America about a problem is not enough so Randy has penned a rock-n-roll tune aptly called “Star Whackers” and debuted it March 18th at a show with his backup band called The Fugitives in Vancouver, British Columbia.

Here is a crowd shot of the entire performance of “Star Whackers” that should help spread the gospel on these a-lister murdering machines.  I will follow the clip with the full lyrics so there is no doubt about Randy’s message: The world, well at least the world of celebrities NEED to hear this important song. We at Starcasm beg of Randy to release it on iTunes or whatever non star whacker infiltrated media platform he approves of.

You can catch a high quality version of the video here that sadly wasn’t available for embedding.