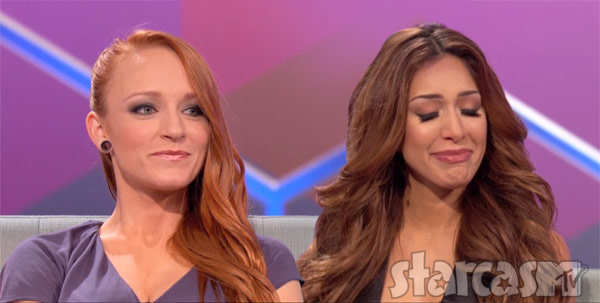 Monday night’s explosive two-hour finale of Teen Mom OG was a fitting bookend to a roller coaster season full of altercations, custody battles, marriages, mystery children, mullet murder, and cheap $17,000 engagement rings. But fans looking for even more mama drama need not worry because next week is Part One of the Teen Mom OG Reunion With Dr. Drew! And, thanks to MTV, we have four preview clips to tide you over until then.

First on the couch will be Maci Bookout and Farrah Abraham, and MTV has been quite generous by posting the usual four previews — this time with two for each. We will start with Maci and then move on to Farrah.

The first Maci Bookout preview clip is all about Ryan Edwards’ parents, mom Jennifer and dad Larry. Dr. Drew asks them what the experience of being on the show has been like for them. “In the very beginning it was kind of rough,” Larry says. When asked why it was rough, Larry explains “Well, Ryan was definitely the bad guy.” Jennifer added, “It’s an emotional roller coaster for sure.”

“It’s never really bothered me,” Larry adds, “I never get on social media so I could care less.” Jennifer reveals that early on she did pay attention to the negativity in the media, and it was hard.

Maci agrees, then makes an interesting point about one of the benefits of being on the show. “Now, looking back, especially after this season, I think sometimes it’s a huge blessing for our situation because we’ve been forced to have conversations that we would have never had. Whereas if the show was never there, I don’t know if we would be in the same position and be as close — even tough it was very difficult.”

Dr. Drew then cops to his many attempts during previous reunions to get Maci and Ryan back together (something we’ve had some fun with over the years), and he asks Jennifer and Larry if they’ve ever hopes for a reconciliation between Bentley’s mom and dad. “Oh yeah,” Jennifer says, “for a long time.” But when asked if she still wished they would get back together she quickly replies, “No. No, I think they’re great as friends. Maci’s happy. Ryan’s happy.”

In the second Maci Bookout TMOG Reunion preview clip, she and Ryan talk about their relationship and Ryan’s new girlfriend:

Ryan is asked first about his girlfriend, and he is evasive as usual. “I understand, Ryan, you have a new girlfriend?” Dr. Drew asks. Ryan seems a bit uncomfortable and responds with: “I don’t know, really.” 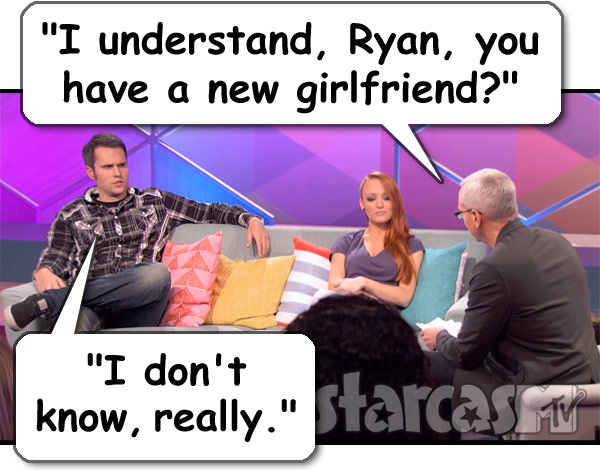 Maci reveals that she just met her earlier that days and thinks she is “awesome.” Dr. Drew seems a bit surprised and hits Maci up for more info. “In the past you’ve always been worried when Ryan gets a girlfriend,” he says. “Honestly, I just met her today,” Maci admits. “But, I mean, she’s really, really cool. I can already tell she’s much different from previous girlfriends.”

The clip ends on a cliffhanger when Dr. Drew asks Ryan, “Can we meet her?”

Next up is Farrah Abraham. In the first clip Dr. Drew gets right to the hottest topic of the season. “Obviously we’ve got to talk about that fight with the producer, Larry, that we saw there. What got you so angry? What was that all about?”

“I think there was a bunch of things that got me angry, and I don’t really feel that any person who is an elder who I am working with –” Dr. Drew laughs and interrupts, “An elder?” Farrah continues. “An elder, who I’m working with, should antagonize me or fight with me, and not communicate appropriately. And I think things got heightened and out of control.”

“I’ve seen Larry — I mean, everyone changes over the years, so,” Farrah says.

“How are you and Larry doing now? You guys cool?” asks Dr. Drew. 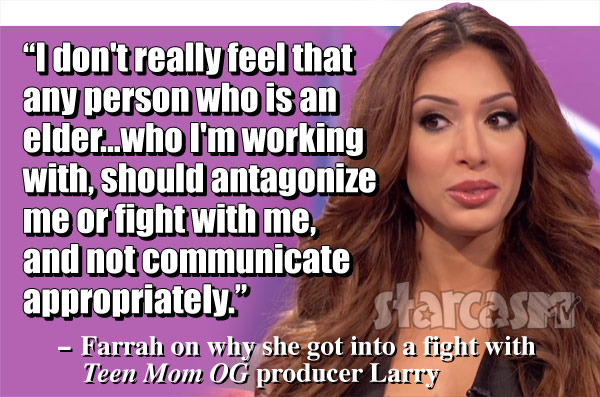 Dr. Drew does move on from that particular incident and tries to get at the root of the issue. “Um, You had something horrible happen in childhood?”

“There’s something called traumatic reenactment that humans do…one of the crazy things about humans is when something bad happens to us — particularly in childhood — we reenact it over and over again in our adult life. And you’ve had men exploit you?”

“You had some things happen to you that you would not do today?”

“You look sad while I talk about this.”

“I don’t really feel like people should have to go through with that.”

“Well, but you’ve been there,” Dr. Drew points out.

“Well, stop it. Stop dismissing it. That is sad.”

Farrah begins to get very emotional as she nods.

“Super sad,” says Dr. Drew as Farrah starts to cry and the clip fades out.

In the second Farrah Abraham Teen Mom OG Reunion preview clip, she is joined by her mother Debra Danielsen and dad Michael Abraham:

The clip hits the ground running with Dr. Drew talking with Michael. “I’m going to ask a tough question dad to dad. I mean, the elephant in the room is some of the exploitation that [Farrah’s] been through. I feel for you on that. I can imagine how conflicted you must have been about that. I don’t even know how to talk about it, frankly.”

“You know,” Mike says, “when that video was announced, it was portrayed that I negotiated her deal.”

“So it’s as though you served her up for this?” Dr. Drew asks.

“When you get involved with the wrong management company, I’ll just say, they ask you, they tell you to do certain things. And in retrospect, I would’ve never gone and done that.”

“So you trusted some people that didn’t — weren’t worthy of your trust at the time?”

“Is that a pattern for you, in your life?

“It’s a pattern for Farrah, a little bit,” Dr. Drew points out.

“Well, it has been,” Michael admits, “but I see Farrah breaking out of that.”

“Well, that particular thing was because I wanted to be by her side, because, you know, six days before there was a release of my daughter had an adult video, OK?”

“How did you get through all that?”

Michael gets very emotional. “A lot of hope,” he says with great difficulty. “A lot of prayer.”

To see the rest, be sure to tune in to Part One of the Teen Mom OG Reunion With Dr. Drew airing Monday night at 10/9c on MTV! And after that, Part Two with Catelynn Lowell and Amber Portwood. And then…Teen Mom 2 on March 21!