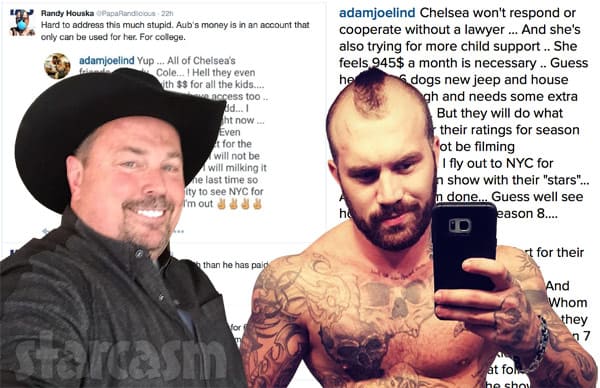 Perhaps it’s because of all the stress that went along with filming the current season, but the cast members of Teen Mom 2 continue with their social media meltdowns. Following the dramatic Twitter feud between Jenelle Evans, Kailyn Lowry, Chelsea Houska, and Dr. Randy Houska last week, show bad boy Adam Lind has unleashed on Instagram in a series of posts revealing how much money Chelsea Houska makes for doing the show and announcing he will no longer be filming — and neither will his and Chelsea’a daughter Aubree!

Everything started with a relatively innocent photo of Paislee (Adam’s daughter with Taylor Halbur) playing with his two dogs. “She missed the puppies :)” wrote Adam.

“When are you gonna be able to get Aubree more?” asked a commenter. “I just think it’s ridiculous you you don’t get Aubree as my as Paisley.. ? not fair to you or them really.”

This is where Adam starts his series of posts, which I have included below. In summary, Adam claims that Chelsea is trying to raise the amount of child support he pays for Aubree to $945 a month and Taylor is also trying to raise her child support payments from him, which are currently $551 a month. He says Chelsea Houska made $250,000 for this current season and will make closer to $300,000 next season. He also says Aubree has received approximately $50,000 to date from MTV, but that money is in an account that only Chelsea can access.

Oh, and Adam announces he is quitting the show. “I just want away from this fake ass sh!t and drama,” he explains. “I’m sick of being known as the guy from Teen Mom,” he later adds. “But instead I’m going to be known for bodybuilding and fitness!”

The Ashley’s Reality Roundup fact checked a lot of what Adam said about salaries, and most all of it checks out. Chelsea did make in the neighborhood of $250,000 for the most recent season, and the stars’ salaries do tend to increase every season, so “close to $300,000” for Season 8 sounds about right as well. The Ashley also says the original dads get close to what the moms do which means that Adam does “make about what Chelsea is making.” And yes, the children do get paid, so $50,000 for Aubree is probably accurate as well.

OK, back to the drama…

Someone paying lowest allowable child support for 6 years and making “big bucks” complaining about having to man up and pay? #crymeariver

invested more in a corvette in one month than he has paid in child support for his entire child’s life.

He is ranting on his instagram to all the thirsty girls. They are buying all his crap. Gotta stick up for my girls

OK, here is all the rest:

ADAM: Chelsea won’t respond or cooperate without a lawyer … And she’s also trying for more child support .. She feels 945$ a month is necessary .. Guess her lil pig 6 dogs new jeep and house just isn’t enough and needs some extra $$… Court it is.. But they will do what they need to for their ratings for season 8… Which I will not be filming participating in .. I fly out to NYC for season 7 reunion show with their “stars”… And after that I’m done… Guess well see how bad they want their season 8….

RANDY: Child support isn’t set by Chelsea, it is set by income. Been paying $170/mo for 6 years, same as an unemployed dad. Court ordered to pay medical insurance since Aubree was born. Never.Paid.Once. Child support hearing? No show, then whine about ruling.

ADAM: Yup … Spoiler alert for their new seasons coming up … Taylor alsooooo filed for more support .. And she already gets 551 for Paislee…. Whom I have some custody of… Weird how they both file for more $$ right when season 7 is coming to an end … To kick of their season 8… Sorry bout that folks but idc anymore I’m done with the show.. Its all fake and staged and MTV tells them both to do things to me to keep ratings hot..

ADAM: Yup … All of Chelsea’s friends… Randy.. Cole… ! Hell they even have an account with $$ for all the kids…. Which only the mothers have access too .. Not the father’s… Isn’t that just odd… I think aubree is up to 50k plus right now … That only Chelsea can get at … Even though I have to sign a contract for the both my kids to film… Which I will not be doing anymore… I’m done.. I will milking it out for a free trip to nyc one last time so Stasia has the opportunity to see NYC for free 🙂 Lol andddd then I’m out ✌✌✌✌

RANDY: Hard to address this much stupid. Aub’s money is in an account that only can be used for her. For college.

ADAM: I mean really think about it … Wtf will Chelsea and randy have when their fame runs out ??!!… Isn’t weird on my entire rant about the show the only point he had to argue was aubrees $$ …. And yes its used for her college …. Which is good !! And what grounds does he have to argue about any of this ?? He shouldn’t even be apart of the show … Thank god my parents were smart enough to not get involved in the show … Maybe he should have done the same …

RANDY: Whatever will I have? Same dental practice I have had for 27 yrs. Chelsea/Cole will have stable jobs, house , cars

ADAM: Chelseas contract will up too 300k plus for new seasons… Also mine is close but Its not worth the $$$ anymore … I just want away from this fake ass sh!t and drama

ADAM: Yup … I’ll pry get a call or long txt from the maker of the show saying I’m not spose to release any of this information… But o really dont give a sh!t anymore f**k MTV f**k teen mom … I will not be filming anymore and neither will my children…

ADAM: They already have been offering me more $$.. And they are also wanting to do another show for just the fathers… It don’t matter the amount of $$$ anymore .. I’m so much better then being bribed by $$.. I wasn’t raised to be greedy and sucked into this evil world … I’m done and so are my kids …

ADAM: I’m sick of being known as the guy from teen mom … But instead I’m going to be known for bodybuilding and fitness ! ?

COMMENTER: If you’re getting even close to 300k, then paying 900 in child support shouldn’t be a big deal

ADAM: I’m not [commenter’s name] and thats per child .. Try and think now… I got bills and expenses.. And on top of that I still gotta pay for everything when I have the kids on my own .. Js …

ADAM: Did I ever once say anywhere ever that I wouldn’t pay or support my kids ? @shavonnmiller nope sure didn’t … So stop trying to act like I don’t ✌✌

COMMENTER: I’m not saying you don’t. But what you are paying isn’t much ?

ADAM: k 900+ isn’t much per child… Y don’t u try n pay that and survive and still pay for the kids when they on your time…

ADAM: I guess its OK for Randy to go on social media and run his mouth and talk sh!t Lol … Wonder if Dr drew will ask him about it ?? Hmm nope pry not…

Randy later got into a Q&A session with folks on Twitter about the whole thing:

TWEETER: the fact he’s worried he doesn’t have access to said account is scary in itself, we all know HE won’t be paying for college

RANDY: Ask him how much he has contributed to her college account

@NOSHANENOPAIN: it’s called child support. That’s his contribution. How would you feel having chelsea taken from you. Grow up

RANDY: Nobody took anyone from anyone. And I am defending my daughter by pointing out his online lies

@NOSHANENOPAIN: there you go again. Wanting more and more from someone you keep trying to remove from aubrees life. Real good role model

RANDY: You don’t know sh!t obviously. Please don’t be a father, you won’t be ready

TWEETER: [in response to @NoShaneNoPain, not Randy] you’re an idiot. They determine cs based on income and they’ve determined Adam can pay that much. It’s not Chelsea who determines that. It’s the court.

@NOSHANENOPAIN: no they take what the mom SAYS he makes. You don’t know sh!t about the system. It’s corrupt. Go do some google

RANDY: Both sides present their finances and income. You really think the courts would go on hearsay from the mother?

@NOSHANENOPAIN: actually yes they can just say what he makes if he doesn’t present the correct docs within 45 days they go off what the mom puts down as his income. I have to do this too for my daughter.

TWEETER: they need to see documents supporting the amount he can pay, dumbass. She doesn’t just say “I want a million dollars” and they say fine!!

RANDY: Whose fault is that then? They had his records, judge decided. Defense by incompetence is not valid

@NOSHANENOPAIN: btw what’s the purpose of needing almost a thousand dollars a month? holy sh!t. My baby mom gets 400….

RANDY: It is determined by income, not need. #obviously.

@NOSHANENOPAIN: no wonder you’re just a dentist. Those who can’t become dentists

TWEETER: Do you have children? Doesn’t seem like you realize how expensive it is…

RANDY: What is adam’s income? Chels pays daycare, med, clothing, everything. He was paying $170/mo. Sound right to U?

@NOSHANENOPAIN: woaaaa did I just heat you say he pays? But before you said he didn’t pay? Contracting yourself now.

RANDY: I never said he didn’t pay.He has been paying lowest amount allowed by state.I will try to type slower so you can read better

TWEETER: #dead ? I’d either block this guy or keep humoring him for our entertainment, I think his IQ is a little on the low side..

RANDY: Arguing with idiots is entertaining for a while.

TWEETER: he has 4 followers

@NOSHANENOPAIN: It’s a good thing you will always take care of chelsea since after mtv she won’t have anything else going for her.

RANDY: Other than husband w/job, a career,a house,vehicle.That does sound sucky. Much rather have a mail order “trainer” certificate

@NOSHANENOPAIN: I love how not one male has come to your defense and half these girls are in high school. That’s not creepy at all!

RANDY: As creepy as posting naked instagram pics and babbling with all the thirsty high school girls?

@NOSHANENOPAIN: the picture was not nudity. Seriously you can’t be this stupid. Did you see d!ck? There wasn’t even brief nude

RANDY: Stupidity hangs together. What was he wearing? Nude=no clothing. Nude does not equal sexual organs.

@NOSHANENOPAIN: lol well he said he’s done with mtv after NYC so without that income I guess you can’t bitch anymore. But we know u will.

RANDY: When he posts lies online, yes, I will point them out

Does Jenelle Evans’ mom Barbara Evans have a drinking problem?