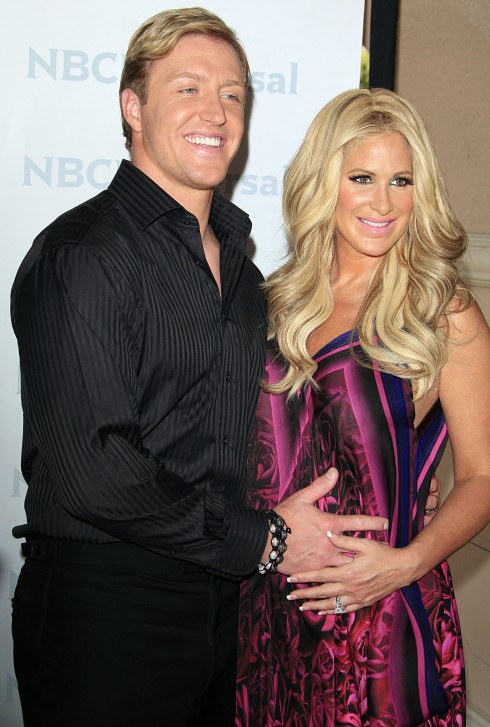 Kim Zolciak and her husband Kroy Biermann have their hands full with four kids already but in a matter of months, they will have one more little one around. The Don’t Be Tardy couple is expecting their third child together, the fifth for Kim who has two daughters from previous relationships.

“She’s pregnant. She’s been trying to keeping it quiet — she didn’t realize she’s showing as much as she is,” a friend reveals to In Touch Weekly. Another friend adds, “Kim and Kroy are so excited to be pregnant again. They didn’t plan it, but they are thrilled.”

“She’s hoping for a girl,” the source claims, adding that if she does have a girl, she won’t be taking the “K” name route as she did with her and Kroy’s sons, Kroy Jagger and Kash Kade.

Kim and Kroy welcomed their first child together on May 31, 2011. Then, nine months after marrying on 11-11-11, their second son Kash arrived. These two have been busy since first meeting in 2010.

“If Kroy had his way, I’d be pregnant all the time,” Kim revealed in a previous interview. “He loves my curves. He thinks I’m sexy when I’m pregnant.”

Kroy is currently in the process of adopting Kim’s daughters, Brielle, 15, and Ariana, 11.

For more of Kim and Kroy, be sure to tune in to their spinoff Don’t Be Tardy every Tuesday night at 9/8c.

The princess has a name — and it involves Diana