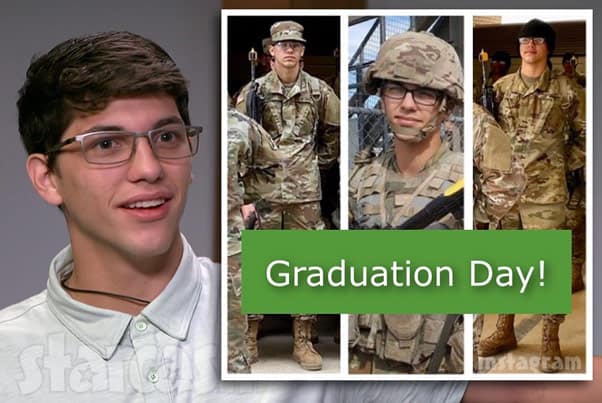 The last time we checked in with Unexpected dad Diego Reyes he had just lived up to the show’s title with the surprising announcement that he had signed up for the United States Army. Fast forward fifteen weeks and Diego is now an official US Army Basic Combat Training graduate!

Diego’s proud dad Fabian shared the photo montage above of Diego on Instagram Friday. “Graduation day for this young man!” he captioned the post. “I cannot be more proud of him.” Unfortunately, the graduation ceremony was closed to the public due to the coronavirus pandemic.

The ceremony was live streamed however. Here’s a screen shot of Private Diego Reyes announcing himself at the microphone: 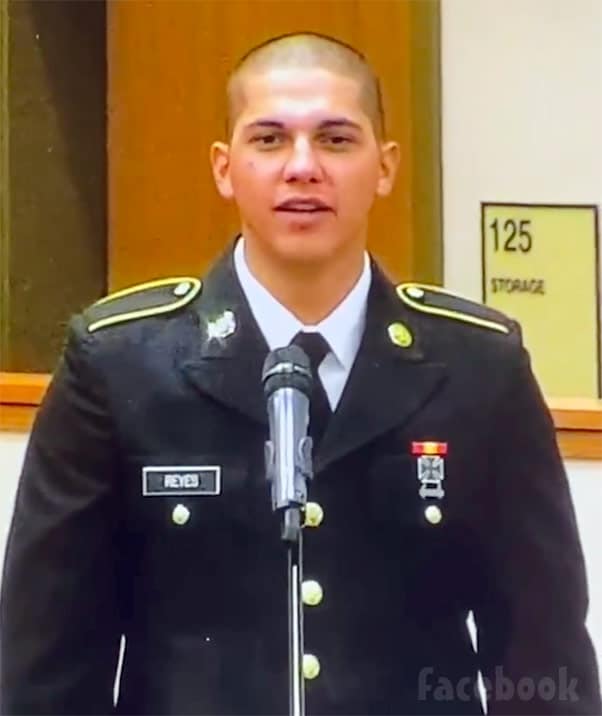 Diego’s training was at Fort Sill, which is just north of Lawton, Oklahoma. His military occupational specialty (or MOS) is 13B Artillery, which is described on the US Army website as a cannon crewmember. More on the 13B Artillery designation from goarmy.com:

Cannon crewmembers work the howitzer cannons that support infantry and tank units during combat, and play crucial roles in the Army’s success on the battlefield.

Fabian responded to numerous comments on his posts about Diego’s graduation on Instagram and Facebook. When asked if boot camp kicked Diego’s ass, Fabian says it “sure did.”

It seems the year off between high school and the Army made things a bit more difficult. “He was a really good high school athlete, but a year out… lol,” Fabian reveals. “He gained 25 lbs, looks really good,” he adds.

Fabian says that training hasn’t just been good for Diego physically. “[Diego] said it has changed him quite a bit,” Fabian tells one commenter who mentioned that basic training changed her life. “Gave him good habits.”

When someone says that Fabian must be proud of Diego, Fabian responds with “very.” He says that his son “fits in” and the Army “gives him a direction until he can grow and find who he wants to be.”

So what’s next for Diego now that he has graduated BCT? Fabian says that there will be a couple weeks holdover before Diego begins his Advanced Individual Training (AIT) at Fort Sill.

Despite being just roughly 51 miles from his hometown of Frederick, Oklahoma, Fabian says that the pandemic resulted in not being able to see Diego at all during his basic training. He says that Diego may be able to get a 1-day or weekend pass while in AIT, but that’s a big “maybe.”

Speaking of Diego not being able to leave basic training due to the COVID-19 pandemic, his ex Emiley Noack talked about that in a YouTube video posted in April. When asked if her daughter Aria got to see his dad, Emiley revealed that Aria and Diego had no contact since February. She iterated that it was due mainly to Diego being at basic training.

If you’re curious what’s going on with Emiley, it appears that she and her boyfriend Hunter are still together. Emiley says that she still works full time and that Diego’s dad Fabian comes to her house to watch Aria while she’s at work so that Aria doesn’t have to go to daycare and be more at risk of coronavirus exposure.

I’m not certain what Emiley’s current job is, but a little over a year ago she was working at a convenience store. If she has a similar job now, that would certainly explain why she has been deemed essential and must continue to go to work.

Anyways…. Congratulations to Diego on graduating basic training! He had more than his fair share of detractors due to his rather flippant and irreverent attitude, but I always kind of liked him regardless, and I was hoping we’d be sharing positive updates on him after he and Emiley left the show. I definitely wouldn’t have guessed that the positive updates would include US Army basic training graduation, but that is really awesome!