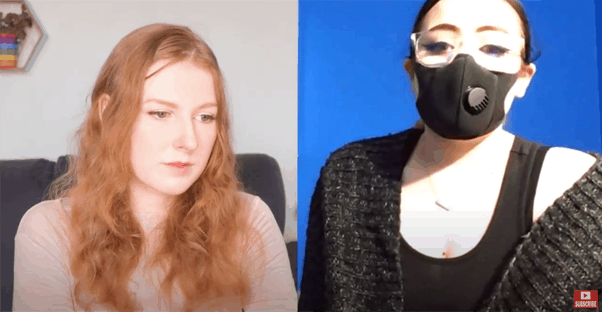 The latest young woman to come forward with a story about former Blood on the Dance Floor frontman Dahvie Vanity is a 19-year-old woman named “Winter.” She shared her story with YouTuber Pastel Belle in a very emotional interview. She was sexually assaulted by Dahvie Vanity starting when she was 15-years-old up until her 18th birthday last year. She actually spent her 18th birthday with Dahvie during in a vacation-turned-nightmare.

Like almost every Dahvie Vanity abuse story, Winter’s mother was involved with her interactions with Dahvie, although she had no idea about the sexual nature of their relationship. Part of Dahvie’s strategy is to befriend mothers in order to gain their trust while secretly exchanging sexual messages with their daughters to groom them for assault. This was the exact pattern that happened with Winter after she and her mother get VIP tickets to a Blood on the Dance Floor show in New York City four years ago.

Looking back, Winter, who is wearing a face-mask in the interview for anonymity, tells Pastel Belle she wishes she could go back in time and change the seemingly innocent events that happened at that concert, because that’s when the seeds were planted for Dahvie to change to coarse of her life just for his own gratification.

During a before-show VIP meet-and-greet, Winter’s mother mentioned to Dahvie that the concert was part of a birthday gift for Winter. The emo singer immediately invited the pair to have dinner with him to celebrate. Before the show had even started Winter was sharing pizza and going shopping with Dahvie, his vocal coach, and her daughter. After the show ended, Dahvie exchanged phone numbers with both Winter and her mom, and by the end of the next week he had fully inserted himself into their lives.

Dahvie, who was already in his thirties at the time, became sexually inappropriate with the young girl almost immediately. He would ask her sexual questions and constantly ply her with compliments, calling her the “most beautiful woman he’d ever seen.”

Referring to her as a “woman,” and not a “girl” made her feel mature and accepted. Furthermore, the boundary-pushing questions made her feel flattered that he trusted her with this type of conversation. He almost immediately started telling her he loved her. Winter compares Dahvie’s use of “love” like water, as in the phrase is as common to him as water, and means very little coming from him.

He also won Winter’s trust by bringing up her dead father often. He had only passed away a few years ago, and Dahvie would say things like he thought he got along so well with Winter because he had the same astrological sign as her dad. “I just thought ‘This is such a sweet man who just wants to be there for me and talk to me,” she said about this type of attention.

Before they met again in person, Dahvie coerced the young girl to expose herself to him and watch him expose himself during a video chat. The interaction made her feel ashamed and uncomfortable, but she didn’t tell anyone about it.

The next day he texted her “What’s up, bro?”

The casual text made her chest feel tight because she had just done a really intimate thing with him, and felt this messaged cheapened the intimacy she thought they’d shared. Despite this negative feelings, she continued to interact with him, and soon he invited her do shoot a music video for a song called “Zero F**s Given” under the band name Sinners are Winners (He changes names often and currently goes by Kawaii Monster and Dark Arts Official.)

Winter was excited about being in a music video but was a little shocked to find out her mother already knew about. The entire time Winter was chatting with Dahvie, her mom had been building her own relationship with the singer.

Her mom had less patience for Dahvie, and called off the music video because he said something to her that offended her. Winter beg and pleaded for her mother to apologize, and because she had never behaved that way before, her mom conceded. She unblocked Dahvie’s number and apologized, and they both traveled to shoot the music video with Dahvie, his age-appropriate girlfriend and former band member Fallon Vendetta (a.k.a. Fallon Maressa) and a girl named Danielle, who was 18 at the time but had been talking with Dahvie for years. Winter was still only 15-years-old.

Dahvie attempted to get Winter to drink alcohol, but she declined. Danielle warned her that he was trying to get her drunk because he wanted to sleep with her. Instead of heeding that warning, Winter told Dahvie what Danielle had said, and he had Fallon pay for a ticket to send her home the next day.

At some point during the shoot, Dahvie asked Winter to help him downstairs, away from everyone else. When she complied, he pushed her head into his crotch. “I performed or@l s3x on him when I was 15,” she says.

After he was done, he pushed her away, went back upstairs and told her to wait to go back upstairs so no one would notice.   “I felt used but at the same time I blamed myself because I could have gone upstairs and said something to someone, but I didn’t.”

He assaulted her again while she was brushing her teeth and her mother was in the next room. “My mother was there every single time that this happened,” she says. She also says she felt she “owed” him because of what they had discussed over text.

After the music video Dahvie would text her continuously, which led her to believe that he really had feelings for her. He would, however, only see her when it was conveniently for him, another common thread to all of the stories of his abuse.

Things finally came to an end last year on her 18th birthday. Dahvie’s career was unraveling, so he had less resources than ever and was living with his mother near Orlando, Florida. Dahvie invited her to go to Universal Studios for her birthday. Once it came time for the trip, which she paid for, Dahvie was stressing out because he had just gotten kicked off of Spotify because of all the controversy and allegations surrounding him. 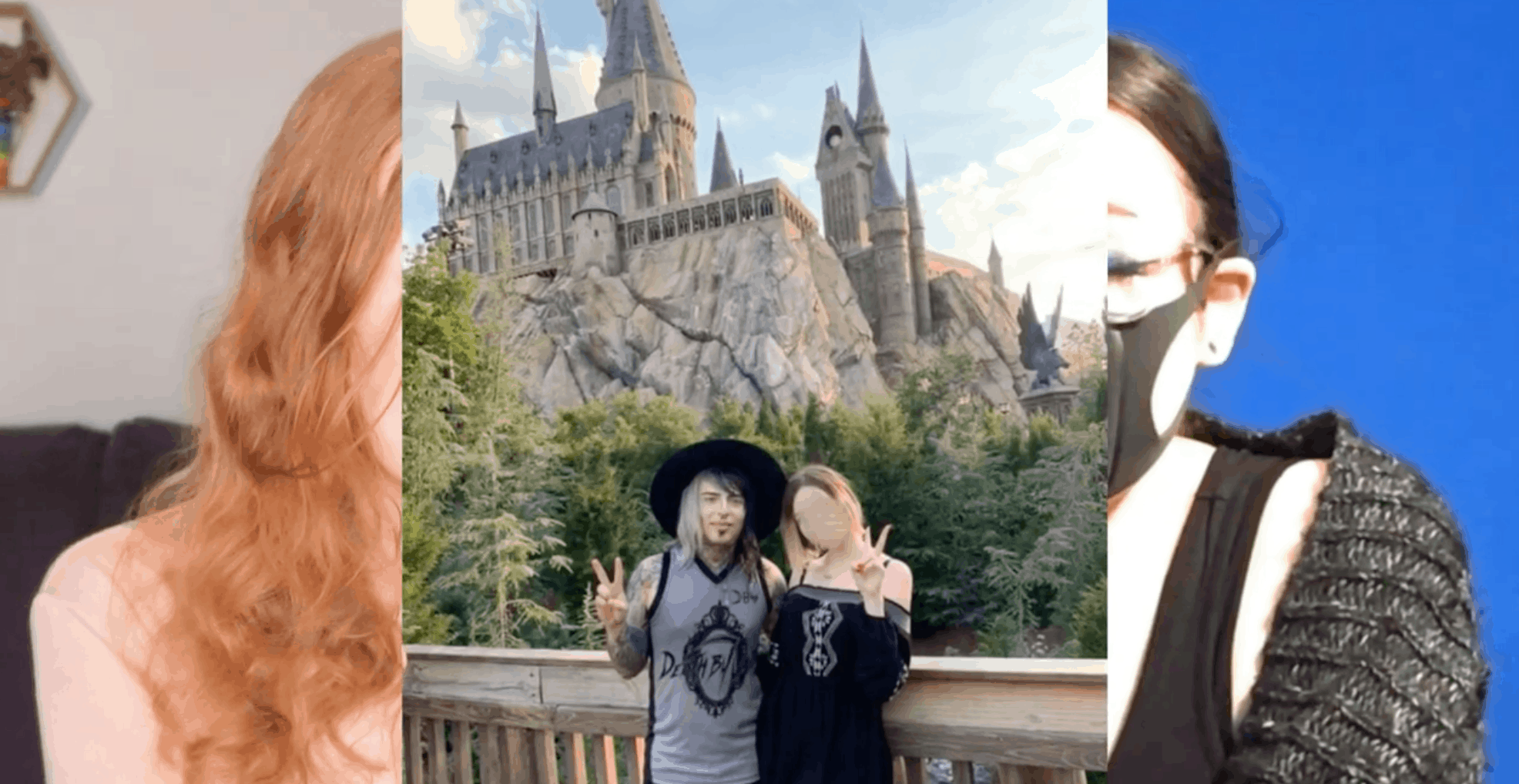 His mom did not want her staying with them, so Dahvie, who had been two hours late to pick up her, rented Winter a cheap hotel room, where she didn’t feel comfortable or safe. The next day they stayed at better accommodations and she felt better about not being left alone, but the illusion of the situation started to fade for her.

Dahvie called up some “Super Fans” of his in the area and used them for accommodation, entertainment, and gifts. Winter had to lie to them about her age and pretend she was at least 21-years-old. For her 18th birthday, Dahvie took her to a run-down hookah bar and watched her smoke. “I thought ‘This is it, this is my birthday,'” she says about her feelings of disappointment. Throughout the trip she realized that he didn’t love her and never did, and it made her feel hate towards him. She wanted to tell him that, but she didn’t. While they were driving to the airport, he pushed her head in his lap again. “I still did it for him, and I don’t know why,” she says in tears. “I think I just did it so he wouldn’t ask again.”

After that trip she felt incredibly ashamed of herself for spending her time and her money on him. “It was just one of the worst experiences,” she says of the trip. “I wish that it would have never happened. I wish I would have never met him.” She regrets spending some of the most influential milestones of her life with a man who “didn’t care about me.”