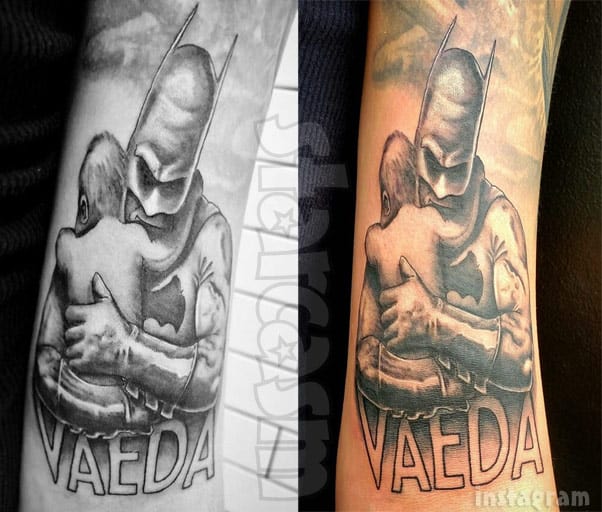 Tyler initially posted a black-and-white photo of the new tat on Instagram, but he later updated with a full-color version (both can be seen above).

“Shoutout to @lancekellar666 at @lancekellarstudios for my new tattoo honoring Vaeda & what a blessing it is to be her father & what a privilege it is to always be her protector!” Tyler captioned the picture.

If you’re curious about the inspiration for the tattoo, which features an injured Batman hugging a baby, it was an original piece of artwork created by Brazilian artist Alexandre Salles. Titled “Son of the Demon,” the digital image was created on a Wacom tablet using Photoshop in 2012.

Here is the original:

Oddly, Tyler has since deleted both tattoo photos without an explanation. Soon after the pictures were posted, numerous commenters in forums and on social media began to channel their inner Sigmund Freud as they claimed to notice more than one instance of a certain part of the male anatomy. ?? It’s unclear if the observations from all the internet dicktectives was the motivation for Tyler deleting the photos.

The Vaeda tattoo is just the latest Batman ink for Tyler, who could almost publish his own graphic novel documenting his Caped Crusader gallery at this point. In addition to a HUGE Batman logo tattoo on his back with his last name “BALTIERRA” spelled out in all caps, Tyler has also paid tribute to his daughter Nova Lee with a bat tat: 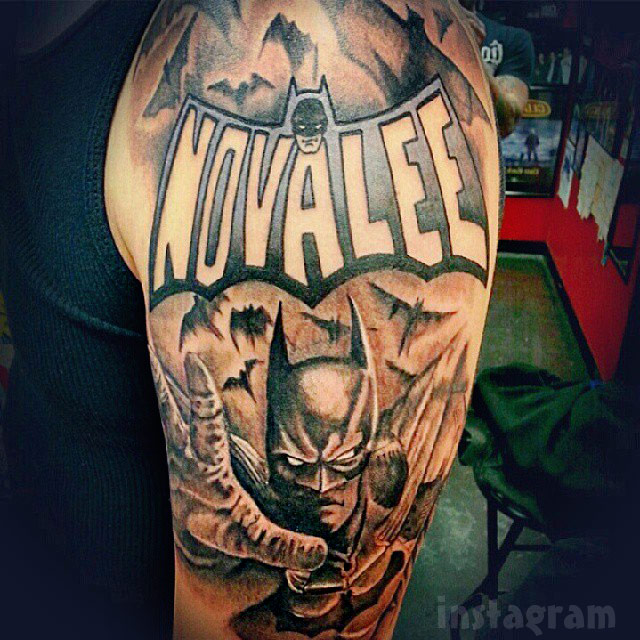 Recently, Tyler got more Dark Knight ink with the quote: “It’s what you do that defines you,” referencing Rachel Dawes’ message to Bruce Wayne in Batman Begins. Batman would later turn the line around on Rachel to reveal his true identity.

“It’s a personal reminder to always pursue what I’m doing with unapologetic authenticity,” Tyler revealed in the caption, “because this gives me the ultimate power to define myself instead of giving that power to anybody else!”

Tyler isn’t the only Teen Mom dad with an impressive tattoo tribute to a popular animated character(s). Teen Mom 2 dad Javi Marroquin is giving Tyler a run for his money with his ever-growing ode to Tim Burton’s A Nightmare Before Christmas!

So what do you think of Tyler’s new battoo? And how about his entire Batman tattooeuvre?

I will wrap up with a few images from his collection and Tyler’s comments:

Shoutout to @stevewebstertattoos at @lancekellarstudios for hooking me up with my new tattoo! It’s a personal reminder to always pursue what I’m doing with unapologetic authenticity…because this gives me the ultimate power to define myself instead of giving that power to anybody else! #InspireYourself #EmpowerYourself #LoveYourself ?????

Shoutout to @lancekellar666 over at @lancekellarstudios for the new tattoo, you killed it my man! ???????? #Batman #DCComics #LanceKellarStudios

Two day session complete thanks to @lancekellarstudios who did an amazing job on my #NovaleeReign tattoo. This representation that I will always protect her is PERFECT! Thanks Lance! #WatchfulProtector #SilentGuardian

Injuries in Matt Baier abuse photos weren’t from Amber, but ‘roughhousing amongst my guy friends’