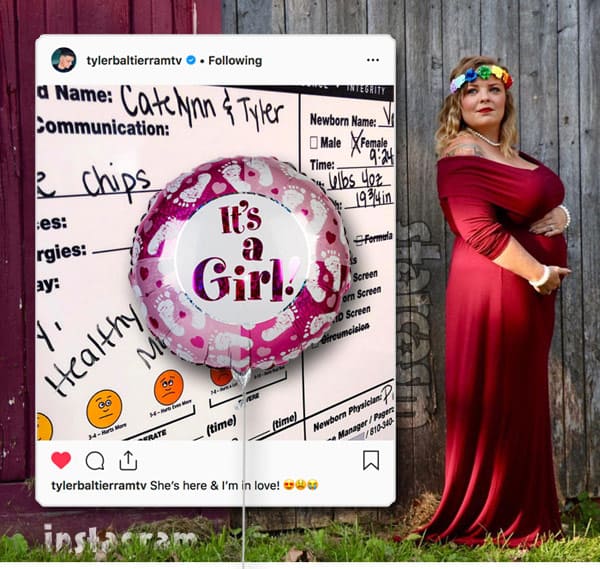 Tyler made the announcement on Instagram with a photo of the dry erase board from the delivery room. “She’s here & I’m in love! ???” Tyler captioned the picture, which reveals that their daughter weighed 6 pounds, 4 ounces and measured 19 3/4 inches when she was born at 9:24AM this morning.

In a bit of a surprise to Teen Mom fans, the parents revealed they decided against going with their previous name choice of Tezlee, which they revealed on the most recent season of the show. Instead, they opted for another unique moniker: Vaeda Luma.

It’s unclear why the couple decided to change names, but I assume we will get an explanation along with some baby photos soon.

In case you missed it, Catelynn announced that she was expecting again back in September. The pregnancy came after she suffered a devastating miscarriage in 2017, which triggered Catelynn’s anxiety and depression issues. She would eventually seek treatment after experiencing suicidal thoughts.

“I really believe in my heart that I was meant to have that miscarriage because I spiraled so hard that it forced me to go to a place where I really had to dig into my childhood traumas,” Catelynn told Us Weekly. “I really think that that baby was meant to leave so I could really dig deeper on my wounds from childhood.”

The couple was surprised to find out she was expecting again last year. “It was a huge shock at first. We were not planning it, especially after the miscarriage and how I went downhill with my mental illness,” Catelynn revealed when she announced her pregnancy.

“We were going to wait a really long time,” Catelynn continued. “We were using protection and everything and still got pregnant. This baby just wanted to be here. It was very unexpected.”

In October, Tyler and Catelynn enlisted the help of their daughter Nova to announce that they were expecting another girl.

The birth of the new baby will most certainly be featured on the next season of Teen Mom OG, which was officially confirmed back in January.