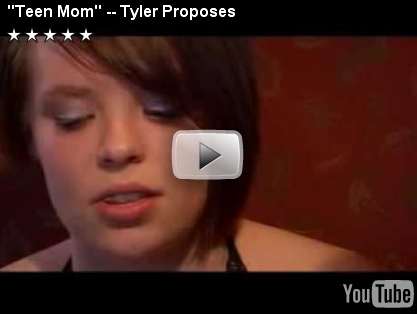 Need to catch up or want to watch again? Buy the complete first seasons of 16 & Pregnant and Teen Mom.

Catelynn and Tyler are two of the sweetest, most mature kids to every grace television. They are beautiful people in a very tough situation, and they warmed the cold cold hearts of the world when they let MTV into their lives to film them making the one of the hardest decisions anyone could ever make.

Although Catelynn and Tyler could have made the best parents of all the teenagers featured on 16 & Pregnant and Teen Mom, they made the best decision for their daughter Carly by putting her up for adoption. Their age and circumstances would have made it difficult for them to give Carly a stable, structured life.

We fell in love with Catelynn and Tyler on 16 and Pregnant, and then got to watch them grow closer together as they dealt with the pain their decision brought on Teen Mom. The drama in their lives escalated as Catelynn had to move in with Tyler because her mom and Tyler’s dad Butch (who are married) decided to move. Soon after, Butch almost went to jail after a domestic violence incident with Catelynn’s mom, and had to stay with them for a while. They also struggled to find peace with the amount of distance even an open adoption requires of the birth parents. They dealt with their feelings well by honestly sharing with each other, and talking with their adoption contact. Catelynn made a really wise decision to attend a retreat with other birth mother who put their children up for adoption, which really helped her deal with her feelings and feel less alone. Toward the end of Teen Mom they had come to accept the reality of their decision a little more.

These are tough circumstances, but these two young people have their eyes on the prize of bettering themselves and leading a happy life, which moved Tyler to propose to Catelynn:

Awww! So sweet! It turns out that Catelynn had no idea!