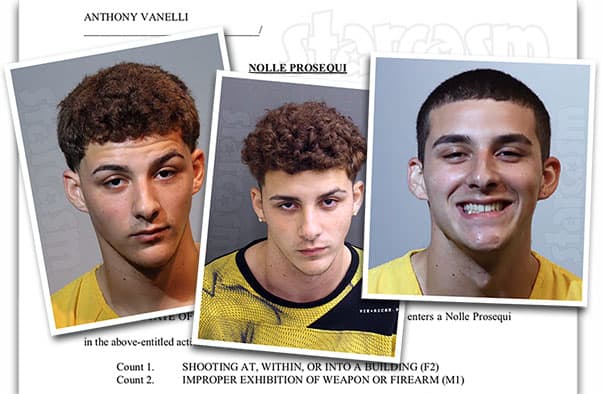 Troubled Unexpected dad Anthony Vanelli got a little bit of good news this week as the prosecutor in one of his cases elected to dismiss the charges.

The dismissed charges stem from the January 15 incident in which Anthony allegedly stole his former step-grandmother’s car and then fired a gun at his former stepdad’s house while wearing a hoodie and a mask.

Anthony was initially arrested for shooting into an occupied dwelling (2nd degree felony) and aggravated assault with a firearm (3rd degree felony). The assault charge was later amended to improper exhibition of a dangerous weapon or firearm (1st degree misdemeanor).

The normal effect of nolle prosequi is to leave matters as if charges had never been filed. It’s not an acquittal, which (through the principle of double jeopardy) prevents further proceedings against the defendant for the conduct in question. Rather, at least when it occurs before trial, nolle prosequi typically leaves the decision of whether to re-prosecute in the hands of the government. If the prosecution decides to bring charges again—for example, after it’s gathered more evidence—it must file a new charging document. (People v. Daniels, 187 Ill. 2d 301 (1999), Kenyon v. Com., 37 Va. App. 668 (2002).)

That’s the good news for Rilah Ferrer’s ex. The bad news is that Anthony is still in jail and still facing a felony charge of aggravated assault and a felony charge of aggravated assault with a deadly weapon. Those charges stem from an April 1 incident in which Anthony allegedly pulled a knife on a woman and told her he didn’t like the guy she was with.

Anthony has entered a not guilty plea in that case with the next scheduled court date set for August 18. It’s unclear if this week’s dismissal was tied to any sort of plea deal in the other case. We will update when we know more.

In other legal news involving Anthony, his mother Rebecca’s boyfriend Markos (who provided Anthony with paternal advice on the show while the two shot hoops together) is still in jail awaiting trial for burglary and second degree murder. Markos’ attorneys tried again to get the judge to set a bond amount, but the motion was denied on Monday.