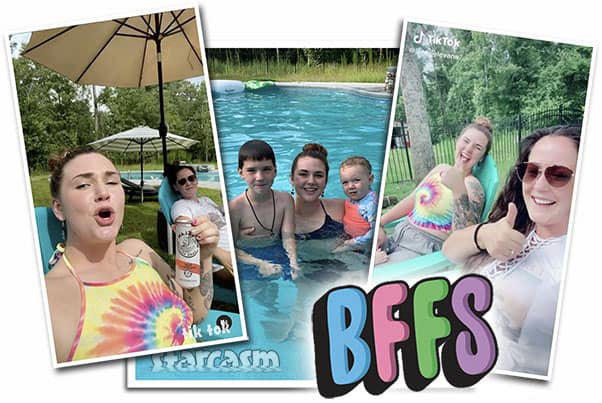 TikTok star Gabbie Egan seems unworried about any public backlash as she openly showed her support for Teen Mom 2 couple Jenelle and David Eason this week. And she didn’t just show support by posting favorable things about Jenelle online, Gabbie actually visited Jenelle on The Land!

Gabbie and her fam are currently on a road trip, and she took a drive down Money Hole Rd to visit the Easons with at least two of her children, as evidenced by photos and videos of the kids playing in Jenelle’s pool.

“Friends that get sued together stay together, and that’s on period,” Gabbie said in a TikTok post that included a photo of herself, Jenelle, and two boys having fun in the pool.

Gabby is referencing a potential lawsuit by 90 Day Fiance star Deavan Clegg after Jenelle suggested Deavan stole her prescription medication while the two were staying together in Chattanooga back in March. In case you missed it, Jenelle, Gabbie and Deavan were all roommates at the same Airbnb in Chattanooga just before the ill-fated Girl Sh*t podcast launch.

Gabbie and Deavan would leave the Airbnb and get a separate hotel room as Deavan raised her concerns with podcast producers over Jenelle being a part of the project. Jenelle was later told to not attend the launch party and the person in charge of the podcast sent emails to some of the other participants letting them know Jenelle had been fired. Jenelle and her husband David arrived at the launch party venue anyways, but they were denied entry into the VIP section where the actual event was being held.

Gabbie was the only Girl Sh*t participant to come out of the VIP section and talk to Jenelle. She has also been the only one of the 17+ female influencers involved in the podcast to show any kind of support for Jenelle online.

Getting back to Deavan’s lawsuit, her rep spoke with In Touch in late June and said it was still in the works. “I can confirm Deavan has an appointment scheduled with her lawyer to discuss moving forward with a defamation and cyberstalking lawsuit against Jenelle as well as filing additional lawsuits against former podcast costar, Gabbie Egan and the owner of the Girl S#!t podcast, who she says violated their NDA [Non-Disclosure Agreement], Lindsay Feldman of BrandBomb Marketing said. “Deavan feels attacked and plans to hold everyone legally accountable.”

There has been no news of the lawsuit actually being filed. I checked court records at the time of this post and was unable to find anything.

I’ve collected some social media posts featuring new besties Gabbie and Jenelle below. David Eason is not in any of them, and neither is Gabbie’s man. Perhaps they had some manly time together hunting or fishing or something?