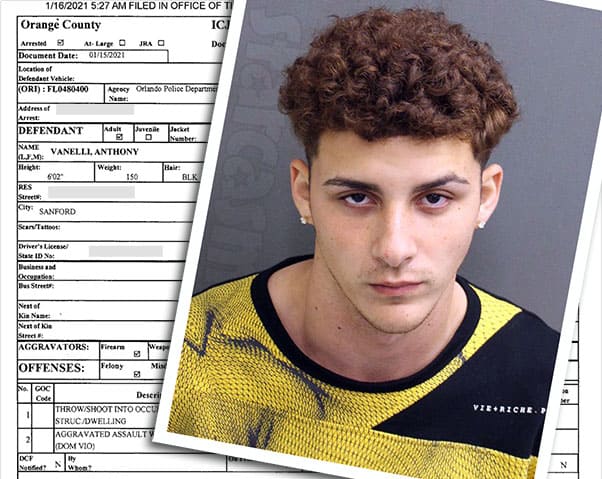 Within days of Unexpected dad Max Schenzel getting out of jail, his former co-star dad Anthony Vanelli was going in. Anthony was arrested less than 24 hours before his 20th birthday after he allegedly stole his former step-grandmother’s car and then fired a gun at his former stepdad’s house while wearing a hoodie and a mask.

According to the police report, officer’s responded to a call from a man named Eric Martinez at approximately 3AM on the morning of January 15. Eric “stated his ex-wife’s son had used a firearm and shot the front door of the residence.”

When police arrived on the scene, Eric shared his account of what happened:

Martinez stated that on January 14th, 2021, at approximately 2200 hours, Martinez was with his ex-wife’s son, later identified as Anthony Vanelli, at Martinez’ residence. Martinez explained he went outside to walk his dog and when he was returning to his residence, he noticed his vehicle was no longer parked in the parking spot he left it. As he entered his residence, Vanelli was not inside. Martinez also noticed his bag containing his wallet and money was also missing.

A few hours later, at approximately 0230 hours. Martinez heard several knocks outside of his residence Martinez opened the door and observed a male with a black mask and a black hoodie standing at his door with a gun in his hand. Martinez quickly closed the door of the residence when he noticed the firearm in the male’s hand. A few seconds later. Martinez hears a loud “BANG” outside his door, where he then observed the bullet hole on his door. Martinez was asked if he recognized the unknown male to be Vanelli to which he stated he was unsure due to the male wearing a black mask over his face.

The vehicle, a silver Mercedes, actually belonged to Eric’s mother. She told officers that she did not give permission to Anthony to use the car, and she wanted to press charges.

Minutes after contacting Eric’s mother, officers were informed that Anthony had returned to Eric’s house in the Mercedes. Eric’s mother then decided she no longer wished to press charges. However, she did agree to allow officers to search the vehicle. According to the report, “the vehicle was searched and a 9mm handgun, a black mask, and a black hoodie was located inside the vehicle.”

Officers then questioned Anthony about what happened: 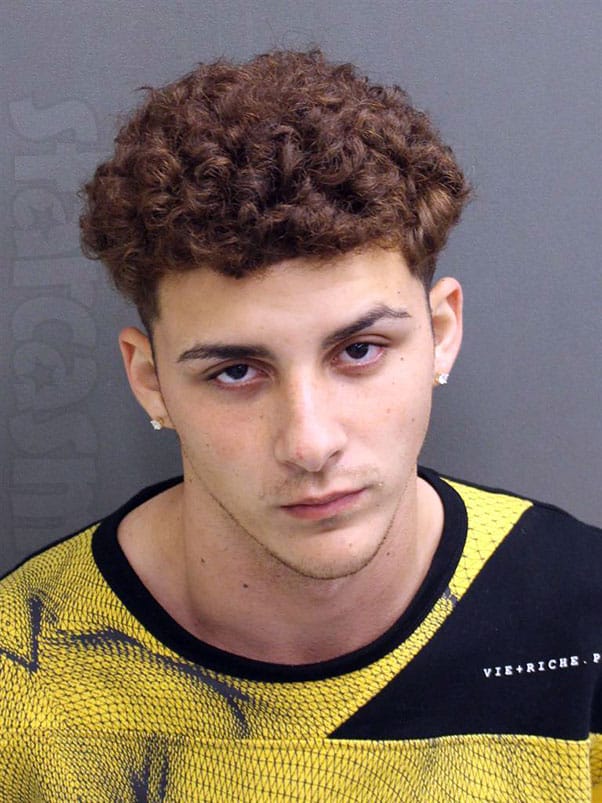 Anthony was initially arrested for shooting into an occupied dwelling (2nd degree felony) and aggravated assault with a firearm (3rd degree felony). The assault charge was later amended to improper exhibition of a dangerous weapon or firearm (1st degree misdemeanor).

Anthony posted his combined $3,500 bond and is scheduled for arraignment early next month.

One day after Anthony’s arrest, Rilah shared this comment on Instagram: “His mom and family are gonna get him help mentally because he’s definitely off.”

Two days after his arrest, Anthony was back on Instagram boasting about how gangsta he was for stealing his former step-grandmother’s car and accidentally shooting his former step-dad’s house. The boomerang selfie featured a shirtless Anthony smiling in front of a mirror with the song “Rap Saved Me” playing. “First day out f*** da threat,” Anthony wrote. “I showed yall 4 😤 it’s up fasho.”

Here are the lyrics that were shown in the clip:

Anthony also shared a text-only Instagram story post suggesting that accidentally shooting his former step-dad’s house was somehow protecting his daughter? “I don’t go back and forth on this internet stuff, but I know for a fact I’m not a bad person,” Anthony explained. “I just protect my daughter from the bad people to scare them to keep her safe. I’m not a killer, just don’t push it.”

He concluded by writing: “God bless all and keep me in your prayers for the best they always want to do me wrong 😖”

Anthony’s ex Rilah Ferrer responded to Anthony’s posts by calling him out as a poser. “He is not from the streets,” she wrote. “He’s gotten his a** beat every fight he’s gotten into that he caused. He is not hard at all. I thought his ‘I’m a bad a**’ mindset would’ve gone away already but he has not changed at all.”

Rilah also shared this disturbing text message exchange she had with Anthony:

ANTHONY: That’s ok cause your gonna die anyways in life

ANTHONY: So I’ll get her later on

ANTHONY: I seen my self wearing your death shirt

ANTHONY: I seen myself at your funeral lol

Rilah’s mom Rosa shared an update assuring everyone that Anthony will not be going anywhere near her granddaughter any time soon:

For everyone concerned don’t worry nothing is going to happen to Rilah or the baby this boy is never going to see them again as long as I am here! He got himself into some stupid s**t and I won’t allow that around my family! He should’ve thought about that before getting himself involved with that life! He had chances to grow up and be a father and provide HE JUST LOST THAT PRIVILEGE 😡

As mentioned above, Anthony is scheduled to be back in court for his arraignment early next month.